Click on the video above to watch it. Download the class four curriculum as a pdf here or see it below: course-1-class-4

We provide a more in-depth look at stages six, seven and eight. In particular, we examine the tasks and pitfalls of stage six, “Building National Consensus” and how to navigate the 12 phases, describe the mechanisms of success and what the movement does after success. 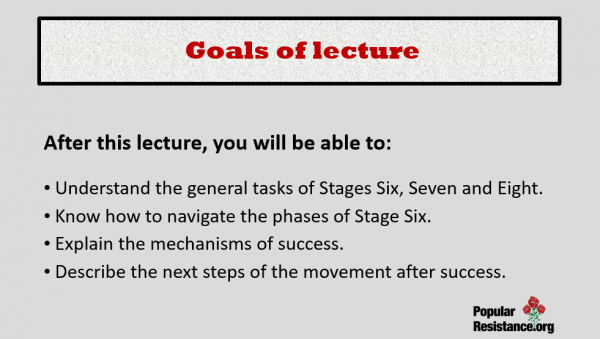 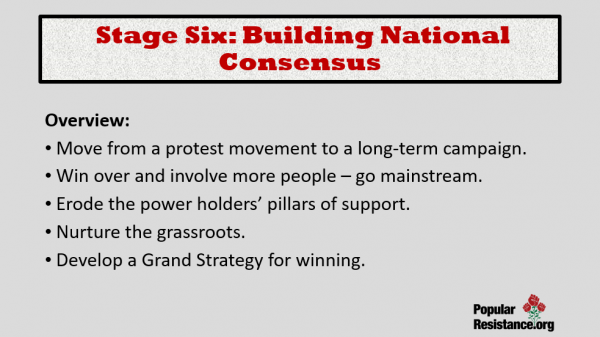 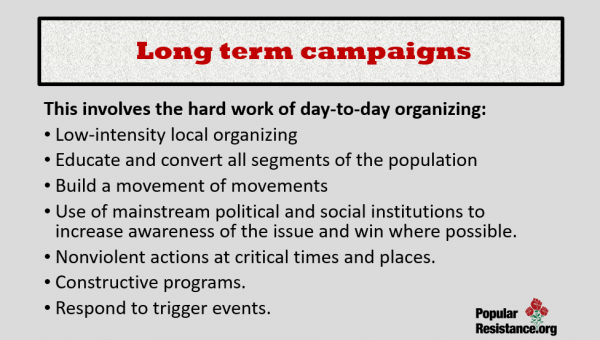 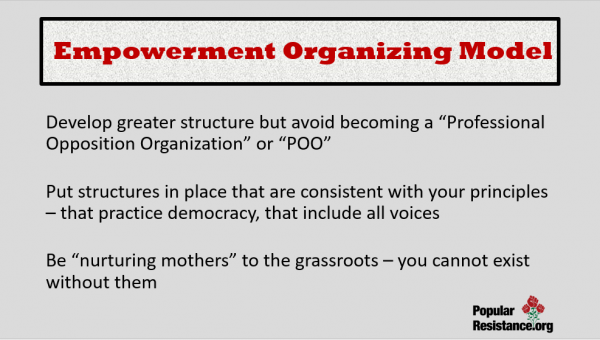 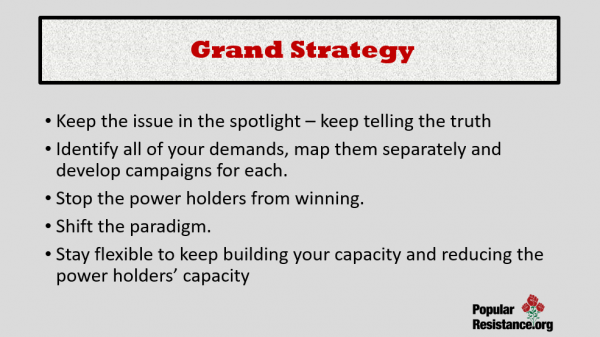 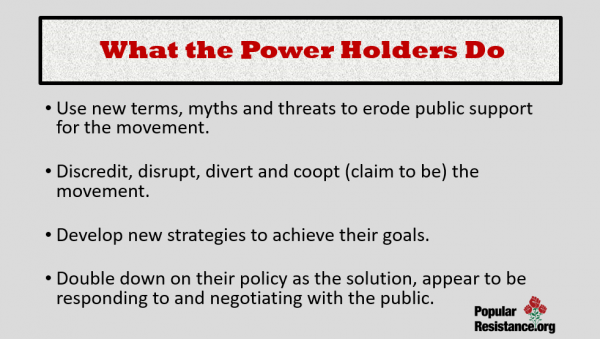 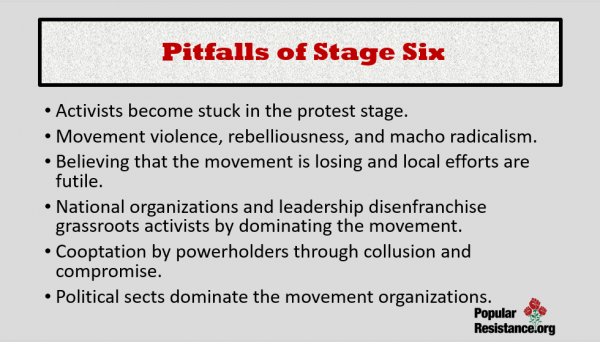 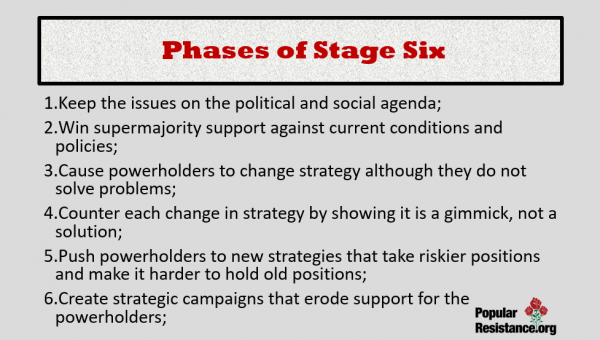 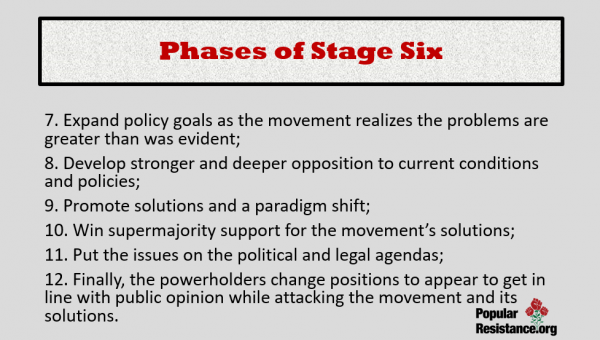 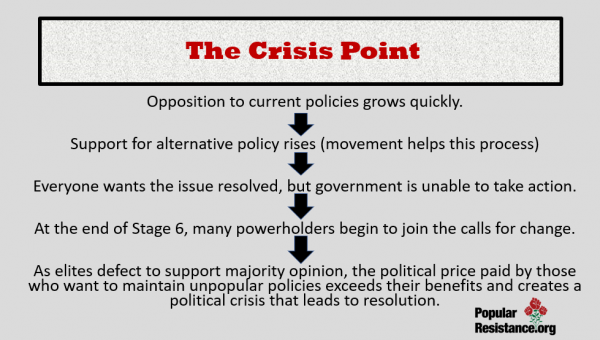 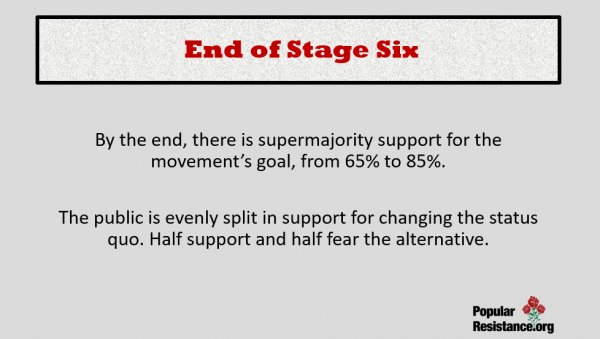 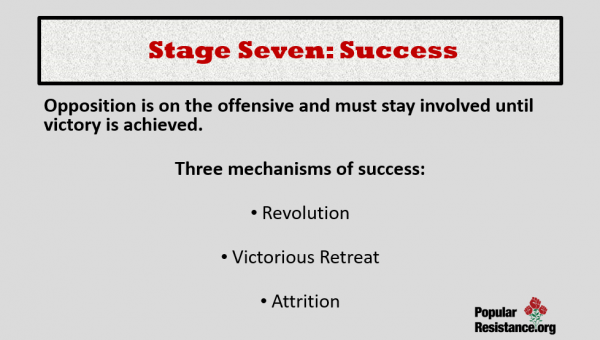 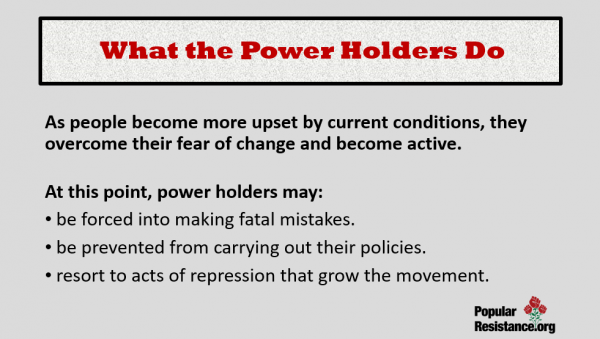 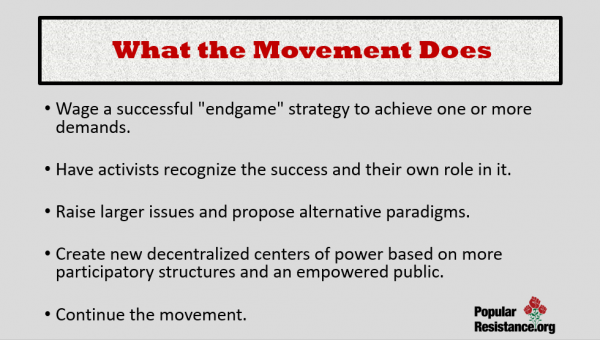 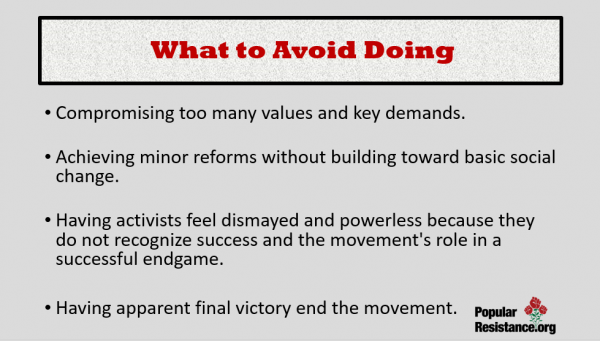 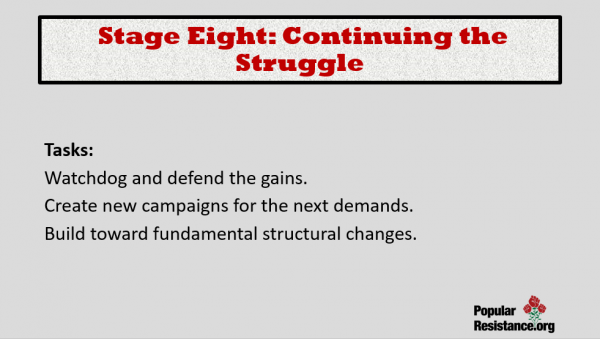 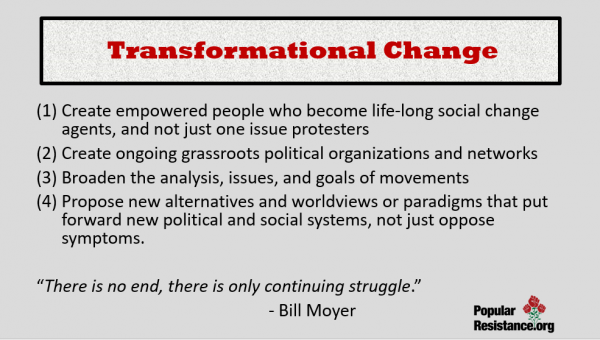 STAGE SIX: MAJORITY PUBLIC SUPPORT
The movement must consciously undergo a transformation from spontaneous protest, operating in a short-term crisis, to a long-term popular struggle to achieve positive social change. It needs to win over the neutrality, sympathies, opinions, and even support of an increasingly larger majority of the populace and involve many of them in the process of opposition and change. The central agency of opposition must slowly change from the new wave activists and groups to the great majority of nonpolitical populace, the PPOs, and the mainstream political forces as they are convinced to agree with the movement’s position. The majority stage is a long process of eroding the social, political, and economic supports that enable the powerholders to continue their policies. It is a slow process of social transformation that create a new social and political consensus, reversing those of normal times.

Although movements need to organize both nationally and locally, they are only as powerful as the power of their grassroots. All the national offices in Washington, D.C., The Movement Action Plan 27 can do is “cash in” on the social and political gains created at the community level all over the country. The movement’s chief goal, therefore, is to nurture, support, and empower grassroots activists and groups. Finally, activists also need to have a grand strategy for waging Stage Six majority movements to win positive social changes against the strong opposition of the powerholders.

Opposition
The opposition needs to wage a Stage Six strategy. Too often strategy has meant a calendar of events, an assorted number of unconnected campaigns, and reactions to new governmental policies. A Stage Six strategy includes a set of strategic programs, new organizational and leadership models, and an overall grand strategy.

New empowerment organization and leadership model
Movement organizations must switch from the “loose” to the “empowerment” model. The loose organization model was highly appropriate at the beginning of the new movement. It allowed for creative, spontaneous activities, which included civil disobedience and quick, flexible, and direct decision-making by all involved. But after six months the loose structure rapidly becomes a liability. It becomes too inefficient, people burn out from long meetings, the most experienced and strongest activists become dominant leaders, new people have difficulty becoming full participants, and the whole organization evolves into a informal hierarchy. The empowerment organization model is the name given to a new structure that activists must construct themselves, in which they try to maximize the advantages and minimize the disadvantages of the hierarchical and loose models. Its goal is to be participatory democratic, efficient, flexible, and capable of lasting over the long haul. This requires more structures, but structures that assure these principles.

This is a critical time for the offices and staff of national movement organizations. While they need to advocate practical policies of “real politics”, maintain the organization, and operate in bureaucracies (no matter how “collective”), they must prevent the organization from becoming a new POO, and the staff from becoming new movement elites. The primary goal is to serve, nurture, and empower the grassroots and to ensure that internal participatory democracy is carried out. The staff model must continue to be that of nurturing mothers, not dominant patriarchs. When the national staff behaves as if they are the movement, the grassroots dries up and the movement loses its power.

Grand Strategy
Activists need to develop a “grand strategy” for waging social movements in Stage Six. Lacking a viable strategy, most activists are unable to see a relationship between their day-to-day activities and the accomplishment of the movement’s goals. Some of the key elements are the following:

Powerholders
The powerholders launch a hardline conflict management strategy to defend their policies, which included the following:

Public
Public opinion opposing the powerholders’ policies grows to as much as 65 percent within a few years, and then, over many years, slowly swells to a large majority of up to 85 percent. The populace, however, is evenly split over wanting a change in the status quo. Half fear the alternatives more than they oppose the present conditions and policies. By the early 1970s, for example, 83 percent of Americans called for an end to the Vietnam war, and currently 65 percent oppose aid to the contras and U.S. military intervention in Central America.

Conclusions
Over many years, perhaps decades, public opinion against the powerholders’ policies swells to an overwhelming majority of up to 85 percent, as was opposition to the Vietnam War. Almost every sector of society eventually wants to end the problem and current policies—most politicians, the Democratic Party, celebrities, professionals, students, Middle America, youth, the unemployed, local governments, and the general population. But strangely, nothing seems to change. The problem continues, Congress seems unable to make decisive votes, and the central powerholders continue their policies, although with cosmetic changes. Moreover the movement appears to be in a lull. There are demonstrations, meetings, and activists, but they seem small, routine, and mechanical, as the movement’s position has been adopted by the mainstream of society. Over the years, however, the weight of the massive public opposition, along with the defection of many elites, eventually takes its toll. The political price that the powerholders have to pay to maintain their policies grows to become an untenable liability.

STAGE SEVEN: SUCCESS
Stage Seven begins when the long process of building opposition reaches a new plateau in which the new social consensus turns the tide of power against the powerholders and begins an endgame process leading to the movement’s success. The Stage Seven process can take three forms: dramatic showdown, quiet showdown, or attrition.

Opposition
The chief engine for change switches from the “movement” to traditional progressives; the “nonpolitical” majority of the population; and mainstream political, social, and economic groups and institutions. The public becomes involved in a broad range of social actions which keep the spotlight on the issues, reveals the evils of the present policies , and creates real political and economic penalties. Most of the business and political powerholders are forced to defect from their ties to the status quo, because it is in their self-interest. The penalty for defending the status quo has become bigger than for accepting the alternative. The politicians will face hostile voters at their next election, and the business community can suffer loss of profits or business community can suffer loss of profits or business through boycotts, sanctions, and disruption of the marketplace. There sometimes is a general, worldwide insurrection which isolates the central powerholders and their dwindling support.

The opposition’s efforts and feelings vary according to the endgame form:

Public
The public demands change. The opposition to the powerholders is now so overwhelming that the whole issue is publicly recognized as the “good guys vs. bad guys”. One is either for decency or for President Marcos, apartheid, and the Vietnam War. While a majority opposition has existed for some years, up to now the mass population was not willing to act on their beliefs. They had not acted because they:

Citizens are so repulsed that their desire to end present policies and conditions overtakes their worry about the consequences of the alternative.

They are ready to vote, demonstrate, and even support the central powerholders in changing present policies. For example, people want an end to nuclear weapons more than they fear Soviet attack and takeover.

Goals
The movement’s goals for this stage include:

Pitfalls
The movement needs to avoid:

Conclusion
The movement finally achieves one or more of its demands. It now needs to address some hard questions: What is success? What needs to be done next? The movement needs to recognize successes achieved, follow up on the demands won, raise larger issues, focus on other demands which are in various stages, and propose larger alternatives and a new paradigm.

STAGE EIGHT: CONTINUING THE STRUGGLE
The success achieved in Stage Seven is not the end of the struggle but a basis for continuing that struggle and creating new beginnings.

Opposition
The movement has to continue the struggle in five different ways:

Powerholders
Governmental bureaucracies are supposed to carry out new laws and directives but could drag their feet and even fail to follow through. While most powerholders will be part of the new social and political consensus and try to carry out the new laws and policies, some may counterattack to reverse the new successes, as the Reagan administration did in ignoring the Boland amendment and continuing its support of the contras after 1984.

Public
A new social consensus of about 80 percent of the populace supports the favorable resolution of the movement’s demand and the resulting new policies and conditions. The new demands on which the movement now begins focusing are supported by between 10 and 80 percent of the public and are different MAP stages.

Goals
The movement’s goals are to assure that the demands achieved are maintained and to circle back to focus the movement on other demands.

Pitfalls
The chief hazards of Stage Eight are having the new successes either inadequately implemented or revoked from backlash.

Conclusion
There is no end. There is only the continuing struggle, acted out in cycles of social movements. The process of winning one set of demands creates new levels of citizen consciousness and empowerment, and generates new movements on new demands and issues.

Peoples’ movements move the world further along the path towards more fully meeting the spiritual, physical, social, and political needs of humanity. Moreover, the very process of being fully involved in the struggle of peoples’ movements contributes to peoples’ political and spiritual fulfillment. Activists are part of the emerging people-power movements around the world. People worldwide are struggling to transform themselves and the world from the present era of superpowers, materialism, environmental breakdown, disenfranchisement, abject poverty amidst opulence, and militarism, to a new, more human era of democracy, freedom, justice, self-determination, human rights, peaceful coexistence, preservation of the environment, and the meeting of basic human needs.

Consequently, the long-term impacts are more important than their immediate successes. The civil rights movement, for example, created a new positive image of Blacks among themselves and whites, established nonviolent action as a means to achieve people power, directly spun off the student and anti-Vietnam War movements, and inspired peoples’ movements got the American people, for the first time, to challenge and change American foreign policy and created the “Vietnam syndrome” in which the American people oppose the century old policy of U.S. military intervention in Latin America to achieve the interests of American powerholders. Social movements are also contagious: Philippines people’s movement spurred similar efforts in Haiti, Chile, and now South Korea.

Real Change is Closer than you Think by Kevin Zeese and Margaret Flowers, 2013

The Tasks of the People-Powered Movement by Kevin Zeese and Margaret Flowers, 2014