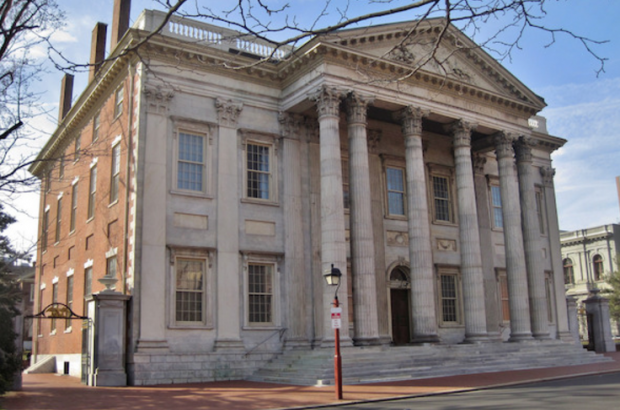 Above Photo: The First Bank of the United States in Philadelphia. (Teemu008 / CC BY-SA 2.0)

Mayor Javier Gonzales of Santa Fe, N.M., was defiant when he spoke with National Public Radio’s Kelly McEvers in November. Donald Trump had just won the election after running on a strong anti-immigrant platform, emphasizing his intent to cut federal funding to “sanctuary cities,” municipalities that have pledged to neither detain nor prosecute people solely for being undocumented immigrants. Gonzales said that would not, while mayor, use municipal funds or resources to enforce federal immigration laws, nor would he allow police or city employees to inquire about a person’s immigration status.

In the interview, Gonzales pointed out that Santa Fe had welcomed immigrants for over 400 years, longer than the age of the republic. He said the city would honor U.S. Immigration and Customs Enforcement requests to refer undocumented individuals arrested for violent crimes to ICE. But he saw the incoming administration’s funding threats as “a test of our values,” saying, “every leader across the country will have to make a decision about what are we going to stand for?”

In Santa Fe’s case, the proposed cuts would amount to 2 percent of the city’s budget—about $6 million—and Gonzales acknowledged that the loss would be difficult to absorb. “We’ll work to find the funds if it gets to that point,” he said, “to make sure that people aren’t left behind.”

If McEvers had asked what possible sources of funding might replace the money Trump is threatening to take away, Gonzales might have answered that Santa Fe was in the advanced stages of considering the creation of a publicly owned bank. In late October, three City Council members introduced a resolution to take the “final steps to determine” whether a public bank would be feasible. Earlier in 2016, a local advocacy group named Banking on New Mexico released a five-year model projecting that a Santa Fe bank could reduce debt service costs by $1 million a year and earn an annual profit, netting the city over $10 million in the bank’s first five years. While that wouldn’t completely offset funds the new administration is threatening to withhold, it would put the city in better shape to absorb the loss and begin the process of building an autonomous local economy that over time could transcend much of the need for federal dollars.

The many municipalities that have stated their intention to remain sanctuary cities despite the incoming administration’s threats have done so because sanctuary status reflects their moral values, their policy concerns (including the preferences of their law enforcement officials), and the desires of their residents. If the new administration makes good on its threat to strip federal funding from cities that refuse to comply with ICE detainer requests, it could mean those cities will pay a price for exercising their values, from the $6 million at stake in Santa Fe to hundreds of millions of dollars in Los Angeles, Oakland, or San Francisco. In fact, President-elect Trump’s threats put these cities between a rock and a hard place since, as Rolling Stone’s Tessa Stuart recently pointed out, giving up their sanctuary status could prove to be even more costly to cities than reasserting it, with irreparable damage done to local businesses and communities.

But like Santa Fe, many sanctuary cities have strong movements for public banks, although not all have taken the steps Santa Fe’s city council has. Oakland’s city council adopted a resolution to study public banking several weeks ago (and reaffirmed their status as a sanctuary city at the same meeting). Philadelphia’s did the same earlier this year. Public banking movements exist in San Francisco, Los Angeles, Portland (Ore.), Denver, Washington D.C., New York City, and Seattle, as well as in states like New Jersey and Vermont, which contain sanctuary cities. If implemented in those cities and states, public banks could provide a financial foundation for municipalities charting their own courses in the face of an aggressive national executive.

What Public Banks Do, and Why Cities Need Them

Run as a public utility and subject to public oversight, a public bank takes deposits of government money, money which is now typically deposited with Wall Street banks. In turn, the bank’s credit can be used to finance public works and local business and pay a dividend into the public treasury. The Bank of North Dakota (BND), currently America’s only public bank, helps finance that state’s infrastructure, education, and public services, supporting community banks when those banks lend to local businesses. BND provides low-interest loans to towns, farmers, small business startups, and students. For several years, the Bank paid the state an annual $30 million dividend, and stopped doing so only when the state budget was so healthy that the BND was better off retaining the earnings to expand its capital base. Public banks in other countries do the same thing, steering financial support to public goods at low or no interest, providing liquidity and financial security through economic downturns and keeping local economies diverse and vibrant.

Public banks can do all of this by giving municipalities (and states—if they model themselves after the Bank of North Dakota) the power to create money through fractional reserve banking, as private financial institutions currently do. This creates multiple benefits: the public’s credit can be used to build a loan portfolio that funds projects that reflect the values of the taxpaying public; the tax base can be expanded by using this loan portfolio to direct and grow the local economy; and a new, non-tax source of public revenue is established. (The BND generated $169 per every North Dakotan in 2015.) Most importantly, these benefits allow a municipality to achieve a greater measure of economic independence, rendering threats of a withdrawal of funds from the federal government less relevant.

The financial threats made by the incoming administration to punish sanctuary cities rely on a myth of fiscal scarcity, the idea that there’s only so much money to go around, and that only big private banks and tax-hostile politicians can define those limits. Cities are reliant on the federal government because they are chained to Wall Street banks, whose propagandists perpetuate the myth of scarcity, while their managers mismanage public funds.

Municipal finance is vulnerable because government at all levels has facilitated the colonization of cities, counties, and often states, by Wall Street. The chief means of colonization has been through the manipulation of financial markets and the trapping of governmental financial management in those markets. Reluctant to raise taxes, cut budgets, or sell public assets, these municipalities are mandated to use private financial institutions to make public financial decisions. Hostage to the bad deals that make brokers and managers wealthy even when they fail their client investors, cities pushed to financial insolvency rely on federal aid, and are thus vulnerable to pressure from an administration filled with the same financial interests as the banks themselves.

Cities, counties, and states can build a firewall against the incoming administration’s threats, and create long-term fiscal stability in the chaotic years ahead, by opening public banks. By lending at low interest and paying that interest directly back to treasuries, public banks provide governments with both a source of financing and a regular source of revenue. A city-owned public bank could turn a profit for the city in its first year by using the bank to fund its infrastructure with public credit. Not only would the city avoid the costs of the municipal bond market and the risks of Wall Street losing its savings in a bad debt swap or other chicanery, but investment could target the services, economic sectors, or infrastructure upgrades the city needs most.

Even if public banks didn’t offset losses of federal funding dollar-for-dollar, they would help sanctuary cities build additional value-generating and budget-saving projects resulting in long-term immunity from federal fiscal blackmail. The Bank of North Dakota helps municipalities in North Dakota avoid the bond market by providing infrastructure loans of up to $15 million at 2% annum for up to 30 years. Public banks ensure small business liquidity, infrastructure financing, the provision of public services, and healthy, in-the-black municipal treasuries, and they do so democratically, without feeding the destructive forces of finance capital. Public banks have the power to finance municipal economies which, when scaled correctly, can meet people’s needs with or without federal support.

Additionally, public banks can serve as engines of new economic practices, some of which many sanctuary cities are already beginning to support. As Alexander Kolokotronis of the Student Organization for Democratic Alternatives writes, many of the biggest cities defying the president-elect’s ICE demands, from city governments in the San Francisco Bay Area to New York and Boston, “are increasingly funneling resources into worker-cooperative development, and devolving fiscal capacity to the community through participatory budgeting—both of which have also empowered undocumented immigrants in the policy realm as well as in their day-to-day economic well-being.”

Welcoming immigrants and providing them with safe space is also part of a vision articulated by organizations like Right to the City, in which democratically-run, socially and economically just communities emphasize environmental sustainability, immigrant rights and the view that land is a public commons. Municipalities’ ability to overcome material insecurity is a bulwark for defending such values. Because public banking treats finance as a public utility rather than a source of private profit, it is a values-compatible approach to funding cities’ longstanding commitments to both sanctuary and economic justice.