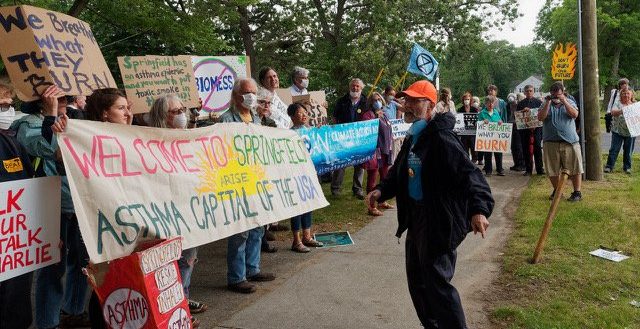 The Public Health Council of Springfield on Saturday, November 21, sent a letter to the chairs of the House-Senate Climate Change Conference requesting that there be no incentives written into the legislation under consideration promoting the building of biomass as a source of electricity. According to the letter signed by the Public Health Council Environmental Health Chair Dr. Jeffrey Scavron, “The Public Health Council urges you to do all you can to not allow the construction of a Biomass Furnace in our city. The potential adverse health consequences to our extremely vulnerable population are enormous and our people must be protected from them.”

The letter to Conference Committee chairs Senator Mike Barrett and Rep. Thomas Golden includes copies of motions passed unanimously by the Public Health Council which cited the “questionable…carbon neutrality” of biomass burning and the “inevitable…particulate pollution” in a city where “asthma and respiratory disease burden…is already among the very worst in the United States.” For these reasons, “The Springfield Public Health Council appeals with great urgency to the Legislature of Massachusetts to not provide any incentives that would enable a Biomass Incinerator to be built in the City of Springfield Massachusetts.”

The biomass plant was first proposed by Palmer Renewable Energy twelve years ago. It faced stiff resistance within the low-income and diverse East Springfield neighborhood where it was to be sited, due to its potential contribution to Springfield’s already poor air quality and to climate change. It was thought to have been defeated when its permit  ran out, but new owners and the City say there was an oral agreement to extend the permit.

Finances were at issue in the failure to construct the plant. Costs of producing electricity through burning biomass reduced its competitiveness. However, in the House Climate Bill submitted this summer, Municipal Light Plants were for the first time in the state’s history required to acquire electricity from renewable and “non-carbon-emitting” sources, a term newly minted, which included biomass. Environmentalists and scientists immediately protested, since burning wood emits more carbon and other pollutants than coal, and thus neither combats climate change nor prevents the respiratory disease caused by burning fossil fuels. However, the bill does create a ready market for the Springfield plant’s electricity, once again making the enterprise viable.

The Springfield Public Health Council joins a growing number of voices, including members of the City Council, health care workers, Neighborhood Councils and thousands of individual petition-signers who have called on the Conference Committee to eliminate any language supporting biomass as an alternative to fossil fuels from the legislation.

The Conference Committee is expected to meet in December and those who wish to sign the petition may do so here. There will be a “Day of Action Against the Biomass Plant on Tuesday, December 1. Those opposing the plant will be calling their legislators to request they urge the conference committee to remove the language from the bill labelling biomass a “non-carbon emitting” energy source.

Further information about the biomass campaign can be found here
http://climateactionnowma.org/biomass-top/