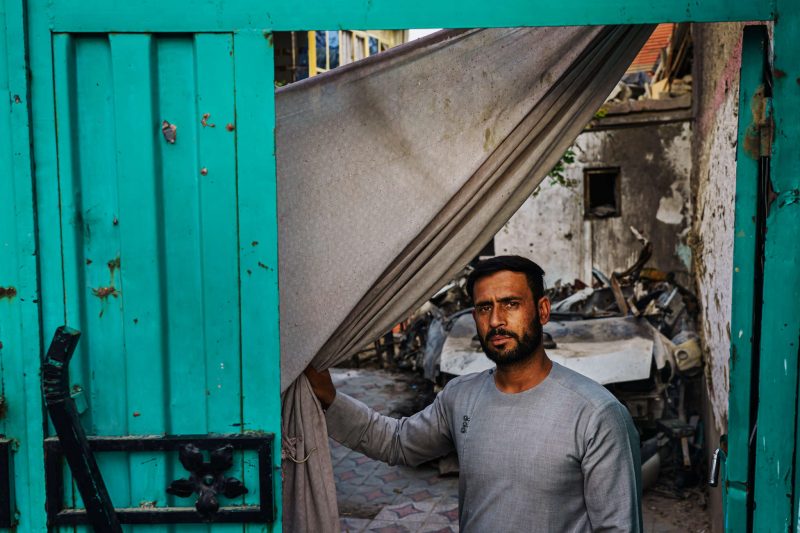 Public Health Professionals Must Demand An End To Weaponized Drones

Above Photo: Emal Ahmadi surveys the damage to his home after a U.S. drone strike killed 10 of his family members in Kabul, Afghanistan, on October 2, 2021. Marcus Yam / Los Angeles Times.

On January 13, 2017, a family including a husband, wife and three small children scurried from building to building in East Mosul, Iraq. They were seeking refuge as a battle between ISIS (also known as Daesh) and U.S.-backed forces swirled around them. The family was huddled in an abandoned school surrounded by other civilians when a U.S.-operated drone struck and destroyed the structure. The father and one of his sons narrowly escaped with their lives. The tragic fate of his wife and other children would not be confirmed until months later when he watched as their bodies were excavated from the rubble.

This account was just one of several described in a recent publication of Pentagon reports documenting the extensive civilian casualties resulting from U.S. drone and air strikes. As the reporting shows, the considerable toll armed drones reap on civilian populations has largely been obfuscated by the U.S. government. What reporting such as this makes clear, however, is that weaponized drones are becoming a serious threat to public health.

The use of weaponized drones for targeted killings is not new and neither is the government’s lack of transparency. The U.S. government has been steadily increasing lethal covert drone operations since 2008, and almost everything we know about the program comes from whistleblowers and leakers. Specifics around the number of civilians killed and the extensiveness of the program are difficult to ascertain, but stories like the one above demonstrate the disregard for human life that results from the use of weaponized drones.

Like all violations of human rights, the public health community, of which I am a part, has an obligation to condemn the use of weaponized drones and demand an end to these targeted killings. If the goal of the public health sector — which includes health care practitioners, researchers, academics and policy makers — is, as the American Public Health Association’s (APHA) website states, “to prevent people from getting sick or injured,” then surely lending an authoritative voice in opposition to weaponized drones is more than appropriate.

U.S. citizens bear special responsibility. Unlike other causes of death or disability, weaponized drones are built, maintained and funded by our tax dollars. It is our elected officials who put them in action. Our complicity is unacceptable.

The APHA has made impassioned arguments advocating for the prevention of armed conflict from a public health perspective. However, little has been written specifically with regard to drones. This omission is important when one considers how our political leaders — even those often seen as advocates for “peace” — view the use of weaponized drones. For example, the Nobel-Peace-Prize-winning former President Barak Obama saw drone strikes as an alternative to the more uncouth, “stupid wars” that he railed against during his campaign. This perspective resulted in a huge expansion of the program under his administration with well over 500 strikes, including one that explicitly targeted and executed a 16-year-old-boy. Political leaders like Obama see drones as an acceptable “middle ground” that allows for the implementation of U.S. force without, at least ostensibly, the traditional collateral of American casualties or civilian deaths.

Drone strike-related deaths are not the only consequence felt by civilians. One researcher explains how children living in a region such as northern Pakistan — with heavy U.S. drone activity — “become hysterical when they hear the characteristic buzz of a drone,” which often circle overhead 24/7. The psychiatric toll this constant threat of violence takes on children is hard to imagine.

Despite the common refrain from U.S. government officials that weaponized drones offer an extremely “precise” method of targeting, the truth is that civilian casualties of weaponized drone attacks are a common occurrence. The indiscriminate nature of weaponized drone attacks is reminiscent of a much older though equally brutal weapon — landmines. Over the past several decades, human rights organizations, academics and activists have worked tirelessly to show the world that landmines maim and kill civilian populations, and therefore, their use should be banned. The public health community has played a pivotal role in this movement by, for example, conducting research which adds evidentiary support for the movement’s claims. The same tact should be taken with weaponized drones. Public health researchers should work with activists and human rights scholars to form a coalition that demands an end to the use of weaponized drones.

Professional societies such as the APHA could provide guidance highlighting the role of public health in ending the use of weaponized drones. This could take the form of a bold policy statement similar to the one APHA released in 2009 regarding public health’s role in the prevention of armed conflict.

With political leaders from both major U.S. parties seeing drones as a convenient workaround to the traditional pitfalls of American use of force, it is imperative that the public health community remind the world that these weapons have tragic consequences. It is our responsibility to lend our voices, research skills and positions of prominence to stop the use of weaponized drones and end the pain and suffering they cause.