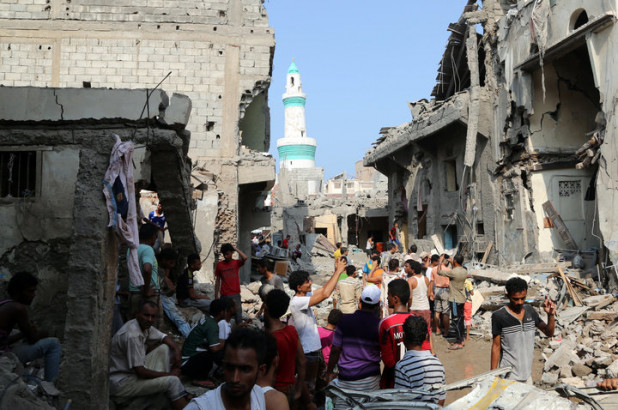 Above Photo: STRINGER VIA GETTY IMAGES. Yemenis gather on September 22, 2016 amidst the rubble of buildings destroyed during Saudi-led air strikes in the rebel-held Yemeni port city of Hodeida the previous day.

If you have never called your representative in Congress, now would be a good time to do it.

Shame on us,” wrote Nicholas Kristof in The New York Times last month. “The Saudis have managed to block coverage of the crimes against humanity they are perpetrating in Yemen, and the US backs the Saudis.”

He was referring to a Saudi-led military intervention in Yemen, which now puts millions of people at risk of death from famine.

As the new administration approaches its first 100 days, Americans who care about the future of their country have understandably been preoccupied with the humanitarian consequences of Trump’s rule at home. These are things that affect us the most – with “us” including immigrants who live here. Health insurance, the environment, education, climate change, taxation and the budget – big battles have been joined, some have been won, and there are many more ahead.

But there are moments when we can help save millions of lives by taking a break from our daily struggles to prevent terrible damage that our government is about to do to people thousands of miles away. This is one of those moments.

The White House is reported to be deciding this week whether to support a planned attack on the port of Hodeida, in Yemen, by a Saudi-led coalition supporting the deposed government there in its two-year old war with Houthi rebels, who now control most of Yemen’s population centers.

This is a port where almost 80 percent of the country’s food enters – Yemen is overwhelmingly dependent on food imports, and was already the poorest country in the region prior to the U.S.-backed Saudi war. The UN reports that 3.3 million people, including 2.1 million children are already acutely malnourished. Hundreds of thousands of children could die if this port is further destroyed in the bombing that will likely ensue if our government gives the green light and direct assistance in the operation.

Here in Washington, dozens of members of the House of Representatives have signed a bipartisan letter to the White House put forth by Representatives Mark Pocan (D-WI) and Justin Amash (R-MI), demanding that Trump seek Congressional approval before a potentially disastrous escalation of US hostilities in Yemen. The letter states:

The United States has participated in Saudi-led airstrikes that have been blamed for most of Yemen’s 10,000 civilian deaths, creating a security vacuum that Al Qaeda has exploited to expand its base of operations. We therefore urge you to terminate US refueling for Saudi coalition warplanes and end, rather than increase, U.S. logistical assistance for the Saudi-led bombings in Yemen. At minimum, any decision by the administration to engage in direct U.S. hostilities against Yemen’s Houthis must be subject to a congressional debate and vote, as the framers of the Constitution intended and the 1973 War Powers Resolution demands.

One might ask, why should the Trump administration care what members of Congress think about its military intervention in Yemen? The answer is that Trump administration officials, as well as Republican Congressional leaders, are reported to be divided as to whether to pursue this escalation.

This is clearly a war of choice, with no legal footing, and where many things can go wrong.
Republican Senator Bob Corker, the influential Chair of the Senate Foreign Relations Committee, made it clear that he doesn’t believe the Authorization for the Use of Military Force that Congress passed in 2001 to counter al-Qaeda would apply to Yemen’s Houthis.

The Trump administration has to choose its battles, and this is clearly a war of choice, with no legal footing, and where many things can go wrong. If it looks like the White House is going to have a continual and possibly escalating fight with Congress—which could spill over into the media – the forces within the administration that oppose further involvement may prevail.

It’s not like repealing Obamacare – defeated for now ― which was a Trump campaign promise. In fact, it’s the opposite: Trump campaigned on a pledge not to get involved in wars other than fighting terrorism. But in this war, Al Qaeda is effectively on the side of the Saudis, whereas the Houthis – who are Shia Muslims – are fighting against Al Qaeda. (Some people still remember that Al Qaeda was behind the attacks that killed 3,000 Americans on 9/11). U.S. support that is essential to Saudi Arabia’s prosecution of this war – through weapons transfers, mid-flight refueling for bombing raids, and targeting and logistical assistance – is not easy to defend in public, if the White House were forced to defend it, especially when it is starving ordinary Yemenis and radicalizing them against the United States.

If you have never called your representative in Congress to ask them to sign a letter, now would be a good time to do it. You could help save hundreds of thousands of people from starvation.