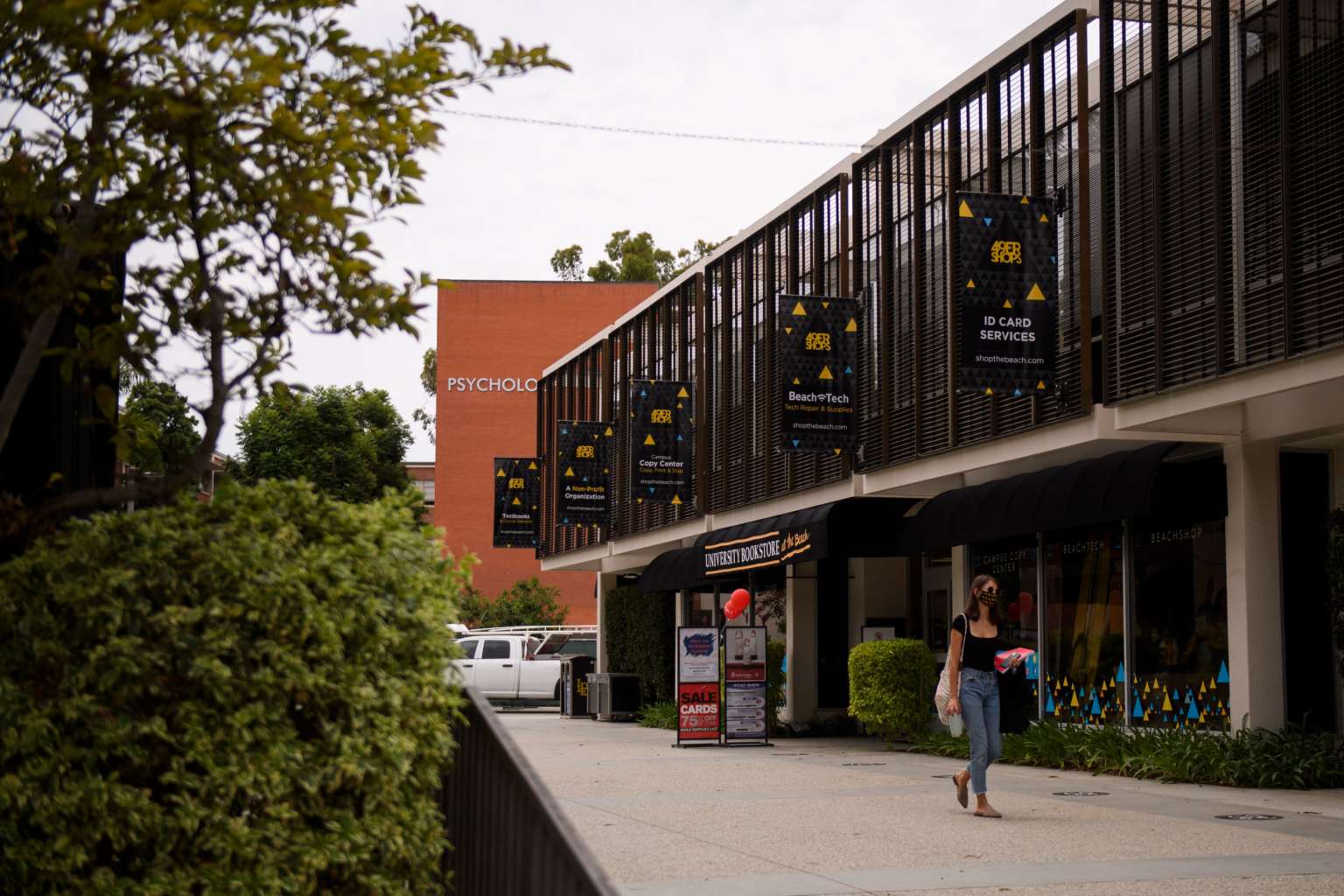 Above Photo: A person wears a face mask as they walk past the University Bookstore at the California State University Long Beach (CSULB) campus on August 11, 2021, in Long Beach, California. Patrick T. Fallon/ AFP Via Getty Images.

Castro’s problems began with an underling — Fresno State’s Vice President of Student Affairs Frank Lamas — who was the subject of ongoing sexual harassment complaints and investigations. In 2018, Castro “enthusiastically” nominated his colleague to become the next president of CSU San Marcos. But later, as complaints about his VP’s behavior avalanched, Castro authorized a $260,000 payout and retirement package for the troubled subordinate. The sweetheart deal included a glowing recommendation letter. That’s golden parachute number one.

When these actions came to light last winter, Castro was forced to end his brief reign as chief administrative officer at CSU. Despite a rather ignominious departure, Castro received more than $400,000 “to advise” the CSU board of trustees for a year and, even without a glowing letter of recommendation, he retains the right to a high-salaried, tenured faculty position at Cal Poly San Luis Obispo. Say “hello” to golden parachute number two.

In what sounds like an episode of “The Real Presidents of Cal State” or a “Game of Thrones” spinoff, within the past month, CSU signed a check for $600,000 to a former provost to quietly settle retaliation and sexual harassment allegations made against the husband of Sonoma State’s president, Judy Sakaki. The claim was settled just weeks before Sakaki and other CSU presidents met with a key state legislator to express their qualms over Castro’s leadership of the system.

These cases are not exceptions. For top CSU administrators, golden parachutes and insider dealing are the rule. As the Los Angeles Times recently reported, more than $4 million in salary and benefits has been paid out in recent years to former high-level administrators. CSU started its “executive transition” program in 1981; it has since been expanded three times. Castro’s predecessor as CSU chancellor, Tim White, receives $327,000 a year for two years plus a $24,000 car allowance. Executives in the program are typically “transitioned” into well-paying tenure-track faculty jobs. California’s state auditor has noted that these arrangements lack transparency and recommended that CSU do a better job of oversight. One beneficiary of the program recently informed a Los Angeles Times reporter that “she was not required to document her work performed under the program.” As students and faculty at the nation’s largest public university system struggle with a pandemic, skyrocketing costs of living, and major disruptions to teaching and learning, CSU continues to subsidize no-show jobs and secret deals for its managerial elite.

In its first public meeting since the revelations about the ex-chancellor, the Board of Trustees faced vocal criticism from CSU students, faculty and staff. Proclaiming that they “were kept in the dark” about Castro’s problems, the board announced that the executive transition program will be put on hold until an internal task force reviews the program and issues its recommendations.

We wish this scandal was just about some bad actors. Instead, it’s time to recognize that the whole mess — self-dealing, secrecy, mismanagement — reflects a systemic failure in higher education.

For over three decades, the academic job market has boomed only for those at the very top of the pay scale — university and college administrators. In 1993, the CSU system employed a little over 2,000 administrators; by 2018, that number had grown to 4,281. In the short span between 2007 and 2015, the numbers of CSU managers grew by 15 percent while the number of faculty grew by 7 percent. Over a five-year period (2011-2016), the budget for the CSU Chancellor’s Office rose by $10 million. From 2005 to 2018, the average CSU president’s salary — exclusive of housing and car allowances — rose by 38 percent. Meanwhile, the number of tenure and tenure-track faculty has stagnated at around 10,500 professors. The number of underpaid, temporary faculty has exploded to almost 17,000, just about two-thirds of CSU faculty.

This lopsided growth reflects a tectonic shift in California (and the U.S. more generally) — the ongoing privatization of public higher education as the cost of a bachelor’s degree is shifted from the state to students. In California, the story begins with Ronald Reagan, who spent most of his two terms (1967 to 1975) as governor trying to punish student and faculty activists by imposing tuition at California’s largely free public colleges and universities. By the late ‘70s, these efforts had borne fruit. In 1980, the State of California spent about $11,240 per CSU student; by 2013, that number had dropped to $6,147. (Over just five years — 2007 and 2012 — CSU and University of California lost a combined $2 billion in state aid.) To make ends meet, CSU’s largely working-class students picked up the tab. CSU annual tuition and fees skyrocketed from about $500 in 1979 to $7,300 in 2022. Over just two decades, 1994 to 2014, in-state tuition at CSU tripled even though institutional expenditures barely grew. By one estimate, students paid 1,360 percent more in inflation-adjusted dollars to attend CSU in 2022 than they did in 1972. Today’s student debt crisis is a direct consequence of this history.

Banks and other lenders reaped the profits from this shift, while public college and university administration responded by mimicking the private sector. Presidents added “CEO” to their titles, while provosts became “chief operating officers” and budget offices were headed by CFOs. More importantly, administrators began to take control of public higher education from faculty and students. Student enrollment in U.S. higher education grew by 78 percent from 1976 to 2018 and full-time faculty kept pace by growing 92 percent, but the number of administrators and executives grew by 164 percent over the same period. Within the CSU system, the number of full-time faculty grew by a measly 3 percent from 1975 to 2008; over the same period, the number of administrators grew by a whopping 221 percent. Over a critical 10-year period (2004-2014) that witnessed catastrophic state budget cuts, California offloaded the costs of higher education onto students and faculty salaries trailed behind inflation, even as management salaries rose 24 percent and CSU president salaries swelled by 36 percent (excluding perks like housing and car allowances). The moral of the story echoes one of neoliberalism’s basic principles: austerity for most, prosperity for a few.

While some describe this management boom as “administrative bloat,” we believe it points to a more profound problem: the creation and growth of an administrative class within higher education, a special interest group that is profoundly disconnected from the vital heart of the university — teaching and learning, faculty and students. Members of this administrative class move from one position and one campus to another — often quite frequently. Many have brief or limited experience of the classroom. They usually have exclusive control of an institution’s purse strings. They also typically view the university in terms of organizational charts and “chains of command.” And, because they are only accountable to each other, they survive and prosper through patronage and clientelism.

When a subordinate reported being bullied and harassed by Fresno State’s vice president of student affairs, ex-Chancellor Castro reportedly responded: “Well, I’m in a really tough spot because Frank [the vice president] is babysitting my son this weekend.” It’s difficult to find a statement that better or more richly sums up the dynamics and dysfunction of the administrative class.

Like any large organization, universities require administration. That’s not the same as saying that universities need an administrative class. To avoid crony managerialism and create more effective administration, universities should instead practice a more democratic and participatory model of leadership. British, German, Japanese, and many other university systems offer one alternative. In these systems, students and faculty (and sometimes staff) play a more central role in decision-making because they elect academic officers — including chancellors, presidents and deans. The university rector is not a professional administrator but instead a member of the faculty who knows the institution well through their career as a teacher and scholar. In many of these systems, the rector enjoys a specific term of office before they return to the faculty. While rectors may appoint managers, their decisions are ultimately subject to the academic community they represent — not to a coterie of like-minded bureaucrats.

As recent events at CSU demonstrate, higher education leadership is in crisis. The current system — with its sweetheart deals and cronyism — benefits a few at the expense of the many, including students, faculty and the public. Hiring consultants and assembling task forces won’t resolve this crisis. More democracy is the only path to more accountability at California’s public universities and colleges.