Above photo: From 2015. Teachers strike against corporate education reform. From GadflyOnTheWall.

San Juan, Puerto Rico – In an escalation in their fight to stop the government from closing or privatizing public schools in the aftermath of Hurricane Maria, the Puerto Rican Teachers Federation occupied Education Secretary Julia Keleher’s office Nov. 7 in an act of civil disobedience. 21 teachers were arrested standing up in defense of public education in Puerto Rico. 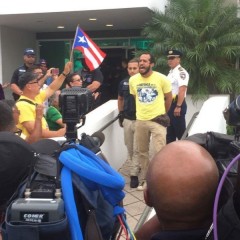 All 21 teachers were released late the night of Nov. 7. In a press conference the morning of Nov. 8, the Puerto Rican Teachers Federation called on school communities to intensify the struggle to demand that their schools be reopened. The majority of public schools still have not been reopened a month and a half after Hurricane Maria devastated Puerto Rico Sept. 20. Secretary Keleher has said they plan to close and consolidate schools after the hurricane.

The Teachers Federation called on teachers, families and students to join them in a national protest on Nov. 9 at 1 p.m. in front of the Education Department. They are calling for all public schools to be reopened and for an end to the agenda of privatization. Mercedes Martínez, president of the Puerto Rican Teachers Federation, said, “Secretary Keleher should know that if she continues her plans to close our kids’ schools, our communities will continue to build resistance. She must reopen all schools!”

The Teachers Federation has been warning that the government is opportunistically taking advantage of the chaos after Hurricane Maria to close hundreds of public schools. The government has tried to close and privatize public schools for a decade but has been thwarted by teachers, students and communities organizing to defend their schools and public education. They warn that the government is trying to copy what happened in New Orleans after Hurricane Katrina, when 7000 teachers were fired and all public schools were converted to charter schools overnight. The Teachers Federation is working to prevent that ‘disaster capitalism’ from dismantling public education in Puerto Rico.