Above Photo: San Juan’s mayor blamed the government for the deaths of more than 4,500 people Harvard researchers tied to the storm.

The mayor of San Juan, Puerto Rico, tore into President Donald Trump after a study released this week estimated Hurricane Maria’s death toll was at least 70 times higher than the government’s official count.

Carmen Yulín Cruz blamed the Trump administration for not doing more to save the 4,645 people estimated by Harvard University researchers to have died as a result of last year’s historic storm. The government’s official death toll remains at 64.

“It was about creating a narrative that made him and his administration look good,” Cruz said in an interview on Wednesday with the Latino Rebels radio program. “And many in the political class in Puerto Rico looked the other way, disregarded the truth and played into his narrative, that he gets a 10 out of a 10” for the federal response to the storm.

“No, Mr. President ― you get 4,645 souls that were lost on your watch because the federal government that you are supposed to be in charge of was incapable of doing its job,” she said.

The Harvard study, published Tuesday in the New England Journal of Medicine, found a lack of access to medical care was the primary cause for an increase in mortality rates in the roughly three months after Hurricane Maria made landfall on Puerto Rico on Sept. 20.

Researchers said their 4,645 estimate is “likely to be conservative” and the death toll that can be tied to the hurricane may actually exceed 5,000. But the high death toll is just one of the study’s alarming revelations, such as the lingering effects of the storm on the island’s older population.

“Sixteen versus literally thousands of people,” Trump said in October. “Everybody around this table and everybody watching can really be very proud of what’s been taking place in Puerto Rico.”

During the same trip, he cavalierly bizarrely tossed paper towels to local residents and lamented how much federal money was being spent on the disaster relief efforts.

“I hate to tell you, Puerto Rico, but you’ve thrown our budget a little out of whack — because we’ve spent a lot of money on Puerto Rico and that’s fine, we’ve saved a lot of lives,” Trump told local officials at an airport hangar. 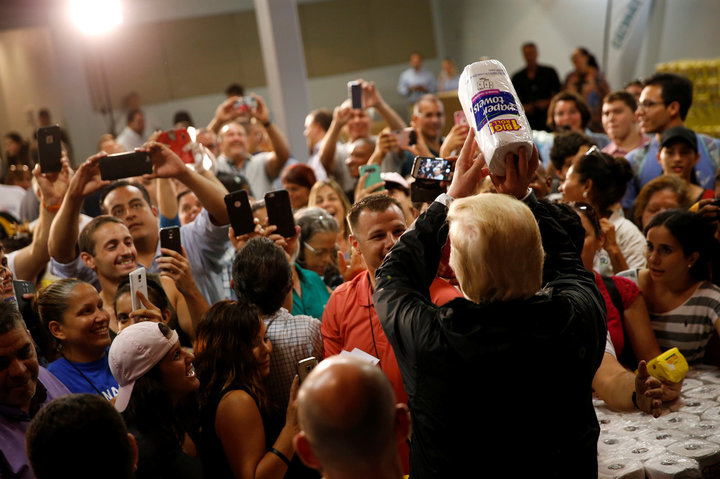 Cruz had begged the federal government to increase rescue and relief efforts, accusing Trump of turning his back on fellow Americans.

Trump responded by calling Cruz “nasty” and claiming her accusations were politically motivated.

“It took too long to understand the need for an appropriate response was NOT about politics but about saving lives,” Cruz tweeted Tuesday in response to the Harvard study.

During an appearance that same day on “CBS This Morning,” Cruz demanded the government be held accountable for “the negligence that allowed those lives to be lost.”

“These people were killed by the neglect of two governments,” Cruz said. “One: the Trump administration that was very dismissive of the value of our lives. And two: those in Puerto Rico that favored political positioning rather than telling the truth.”

“The negligence that allowed those lives to be lost, needs to be accounted for,” San Juan mayor @CarmenYulinCruz told @DavidBegnaud regarding the estimated death toll from Hurricane Maria. https://t.co/XKnNKSVYdD pic.twitter.com/1V68xUD6pT

“We’ve been supportive of [Puerto Rico Gov. Ricardo] Rosselló’s efforts to ensure full accounting and transparency, and those who have suffered from this tragedy deserve nothing less than that,” Sanders said.

“We’ve responded with the largest [Federal Emergency Management Agency] operation in history,” she said. “And we’re going to continue to work with the people of Puerto Rico and do everything we can to be helpful.”

A representative for the White House did immediately respond to HuffPost’s request for a response to Cruz’s latest comments.