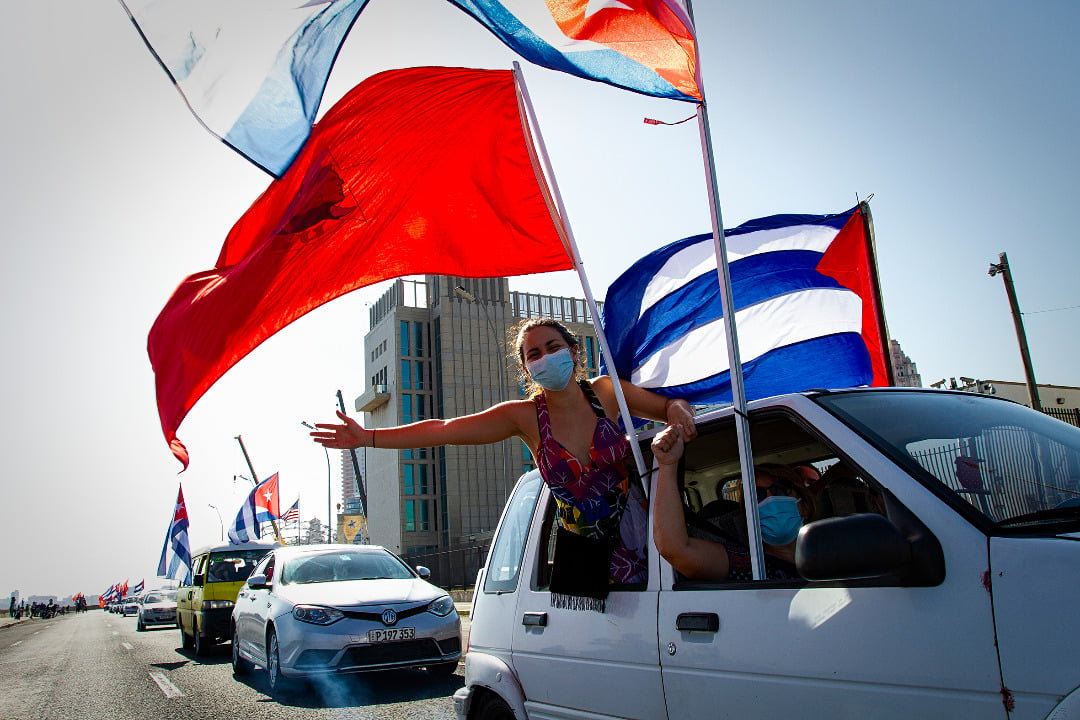 Above Photo: Havana, Cubans caravan against the blockade in front of the US embassy. Alejandro Azcuy.

Today car and bike caravans in many U.S. cities are rightly demanding that Cuba be taken off the U.S. State Department’s “State Sponsors of Terrorism” list.

Did you know there was such a thing?

Every presidential administration appoints a secretary of state. Now it is Antony Blinken; before him was Mike Pompeo, and under Obama it was John Kerry and Hillary Clinton. And the president, through the secretary of state, can put countries on this list or take them off. It is that arbitrary.

As a parting slam against Cuba, on Jan. 12, 2021, just eight days before Joe Biden assumed the presidency, the Trump administration condemned Cuba once again. And Biden has let it stand, although he can waive provisions or decide to remove Cuba from the list altogether.

There are automatic consequences, not only for the country put on the “naughty” list, but other countries, businesses and even individuals. The State Department website says sanctions “include restrictions on U.S. foreign assistance; a ban on defense exports and sales; certain controls over exports of dual use items; and miscellaneous financial and other restrictions.”

Okay, the U.S. won’t give foreign aid or sell weapons or export “dual use” items – like how Washington blocked chlorine to purify water in Iraq when that country was on “the list,” or how it designated Pastors for Peace/U.S.-Cuba Friendshipment school buses and toasters as possible “dual use” items!

But let’s look at “miscellaneous and other restrictions.” Additional “sanctions laws that penalize persons and countries engaging in certain trade with state sponsors” are activated.

If a relatively small country like Cuba wants to buy ventilators or other medical equipment, raw materials for their life-saving vaccines, or anything on the international market, who will trade with it when threatened by the U.S.?

There are plenty of examples of mega-fines levied by the U.S. against major foreign banks, corporations like Honda and even Airbnb. Is it worth the risk of irritating Uncle Sam to trade with a small market of 11 million people?

There is no knowing what else is activated, just by putting a country on “the list,” until you run afoul of it. If a vacationer from England enjoys a vacation at Varadero, snorkeled or enjoyed a bird-watching or cigar aficionado trip – perfectly legal in their country, unlike the U.S. – they are surprised if they decide to visit the U.S.

The U.S. excludes these individuals from using the visa waiver program simply because they enjoyed a Cuban beach. They may not get an appointment for a visa interview for months.

Even U.S. states have automatic laws prohibiting sales to countries on “the list.”

Who is the real terrorist?

What gives the United States the authority to call anyone a terrorist?

Cuba was again voted to be part of the United Nations Human Rights Commission. A Cuban woman got the highest number of votes for the Convention on the Elimination of All Forms of Discrimination against Women (CEDAW). On Nov. 2 and 3 the U.N. General Assembly will again call on the United States to end its one-sided war against Cuba – as it has for 30 years.

Pro-blockade politicians try to use the scary word “terrorism” to stop people from looking for the facts. Is it really terrorism to help end racist South African apartheid? At a time when police and their agents were assassinating Black leaders like Fred Hampton, Mark Clark, Malcolm X and Martin Luther King Jr., was it wrong to give refuge to Assata Shakur? Was it wrong to host peace talks to end the civil war in Colombia? These are some of the excuses that are given to divert from the real reasons which is to bring Cuba to its knees.

Cuba gained independence and sovereignty through a revolution. Cuba prioritizes human needs and development, not exploiting workers to make a handful of billionaires rich. It has no landlords or predatory bankers. Instead of restricting rights, Cuba expands rights, consultation and participation.

“Will the Real Terrorist lease stand up?” The title of the documentary made by Saul Landau as the world fought to free the Cuban 5 from U.S. prisons seemed irrelevant on Dec. 17, 2014, when the U.S. decided to switch Cuba strategies allowing Gerardo Hernandez, Ramon Labanino and Antonio Guerrero, the last three Cuban heroes, to fly home, free from U.S. penitentiaries.

But after Jan. 12, 2021, the history of U.S.-sponsored terrorism against Cuba and its friends became important to review.

It is important to note that Cuba has never attacked or threatened the United States. Never planted bombs in hotels, shot bazookas at the United Nations or assassinated diplomats in the streets of New York or Washington, D.C., never spread biological toxins or attempted to assassinate political leaders. In fact, it was information from Cuban intelligence that prevented the assassination of President Ronald Reagan in North Carolina.

All of the actions described above were, however, carried out by the U.S. and its agents against Cuba.

The Oct. 6 anniversary of the midair bombing of a commercial airliner will be recognized in Barbados with a renovated memorial to Cubana Flight 455 and the 73 people who died. Luis Posada Carilles, who died a free man in the U.S., organized and paid for this mass murder.

At the same time, communities across the U.S. are passing resolutions asking for better relations with Cuba. Most recently, the City Council of Willimantic, Connecticut, called for the U.S. to end the blockade in a 7-2 vote.

It is likely that ratio could be applied to the entire U.S., where resolutions representing more than 41 million residents have been passed in labor unions and city councils, state legislatures, school boards and county commissions. This is a clear indicator that the majority of people in the US want normal relations with Cuba.

A small but important first step toward justice is for President Biden to remove Cuba from this scurrilous and self-serving list. He should do it now.

As we support the heroic Puentes de Amor monthly caravans through the streets of Miami by creating support actions in our local communities on the last weekend of each month, we need to keep raising the demand to #Delist along with #UnblockCuba.

We encourage all supporters of Cuba to come to New York City on the weekend before the vote at the United Nations, Oct. 29-30!