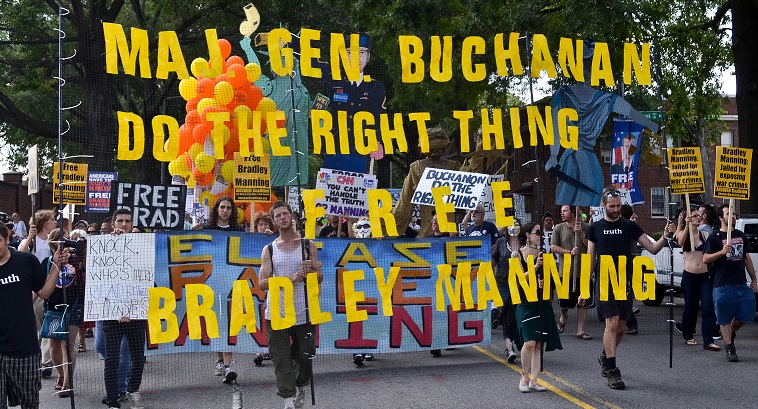 Pvt Manning Needs You To Write A One Page Letter Now

[A] legal system that doesn’t distinguish between leaks to the press in the public interest and treason against the nation will not only produce unjust results, but will deprive the public of critical information that is necessary for democratic accountability.PVT Chelsea (formerly Bradley) Manning’s 35-year sentence is an outrage to the idea of American justice, and creates serious concerns for democracy advocates around the world. It’s been condemned by public figures as wide ranging as Cornel West, Ron Paul, and American Civil Liberties Union ‘Speech, Privacy, and Technology’ Project Director Ben Wizner, who stated,

“[A] legal system that doesn’t distinguish between leaks to the press in the public interest and treason against the nation will not only produce unjust results, but will deprive the public of critical information that is necessary for democratic accountability.”

However, there’s something you can do right now. Under the Uniform Code of Military Justice, Convening Authorities are granted the power to reduce or eliminate a convicted soldier’s sentence. They use this power when they feel the court martial failed to deliver justice. As Commanding General of the Military District of Washington, Major General Jeffrey S. Buchanan is the only other individual besides President Obama with the power to lessen WikiLeaks whistleblower PVT Manning’s sentence in the immediate future.

We are now requesting letters from professors, law experts, human rights advocates, politicians, artists, veterans, and concerned citizens urging Maj. Gen. Buchanan to reduce PVT Manning’s sentence. These letters will be submitted as part of an application for clemency from PVT Manning’s legal defense. We are collecting these letters atnathan@bradleymanning.org

So what are you waiting for? Write a letter yourself, then encourage any professors, lawyers or community leaders you know to do the same.

There are a few important guidelines to keep in mind as you compose your letter:

Your letter should be approximately 1 page long.