‘Qassem Soleimani Assassination: Trump Is Playing With Fire To Save His Presidency’

By Nader Entessar and Kaveh Afrasiabi, Middle East Eye
January 3, 2020
| Educate!
‘Qassem Soleimani Assassination: Trump Is Playing With Fire To Save His Presidency’2020-01-032020-01-03https://popularresistance-uploads.s3.amazonaws.com/uploads/2017/12/popres-shorter.pngPopularResistance.Orghttps://popularresistance-uploads.s3.amazonaws.com/uploads/2020/01/irans-qassem-soleimani-and-us-president-donald-trumpafp-e1578064438631.png200px200px

Note: The article below provides some context for the assassination of Commander Qassem Soleimani. It is difficult to find words that describe the recklessness of this murder by President Trump and the Pentagon. Iran is carefully considering how to respond. It has the capacity to strike the US military and its allies anywhere in the Middle East. They also have the capacity to stop oil from being exported from the Middle East with tremendous implications for the global economy. The price of oil is already increasing in response to the assassination. It is hard to imagine any step Iran can take that will not do more harm than good as it will lead to escalation. Stopping an all-out war between the US and Iran, will allies of each country lining up for a regional war, must be the goal of all who oppose war and militarism.

While saying Trump took this action in order to win re-election seems trite, Trump has in the past said President Obama would start a war with Iran to win re-election. Instead, Obama entered into the nuclear agreement which was a path to peace.

President Trump has been unable to negotiate anything with Iran. Once he unilaterally withdrew from the nuclear agreement and refused to lift the sanctions and fulfill US obligations under the agreement, even though Iran was living up to its side of the bargain, it was impossible for Iran to trust the US or the president. Now, Trump seems to be doing what he said his predecessor would do — go to war to aid his re-election. Some in the US corporate media are cheerleading this illegal murder, people across the globe see the action as a flagrant violation of law that could lead to war between the US and Iran, as well as war throughout the region.

Join us on Saturday, January 4 in a national day of action calling for the US to get out of Iraq and the Middle East. This action is more essential after this escalation of conflict by Donald Trump brings the region to the brink of war.  KZ

To shore up his flagging presidency, undermined by the sting of impeachment, Trump is pushing for another calamitous Middle East war

The US assassination of Qassem Soleimani, Iran’s top commander, and a number of Iraqi militia leaders, on Friday, represents a significant escalation tantamount to an act of war with grave long-term consequences.

Iran’s volcanic anger will inevitably explode into retaliatory action, as indicated by the statement of the country’s supreme leader, and will undoubtedly target US forces in Iraq.

Viewed from Tehran, this is American rogue behavior run amok, a blatant act of war with the full-blown arrogance of a declining superpower willing to cross any red line, transgress any rule of law, to achieve its hegemonic ends.

Trump’s dangerous escalation brings us closer to another disastrous war in the Middle East that could cost countless lives and trillions more dollars.

Trump promised to end endless wars, but this action puts us on the path to another one.

The timing of the operation is of the essence.

For the Trump administration, 2019 ended on a sour note, with the double whammy of an impeachment-induced domestic political crisis and a combustible, dangerous escalation in Iraq that could, in light of this latest development, easily turn 2020 into another year of US war in the Middle East.

With the seeds of such a war firmly planted by unbounded Iranophobia, which is reflected in the unilateral US warfare waged under the rubric of a “maximum pressure strategy”, its slow but steady manifestation in the Iraqi theatre of conflict has become an inescapable reality.

Locked in a zero-sum competition for influence in Iraq, Washington and Tehran are now on a collision course and, unless prudent diplomacy prevails, a highly unlikely possibility in light of Soleimani’s assassination, the current situation will likely trigger a new military dimension in Trump’s anti-Iran strategy.

Some context to this week’s events is useful here.

Coinciding with a joint Iran-Russia-China naval exercise in the Gulf of Oman as a clear indication of Beijing’s and Moscow’s antipathy towards Trump’s anti-Iran policy, last week’s US airstrikes on pro-Iran militias in Iraq and Syria have been portrayed as “precision defensive” strikes by the US military in response to the growing threat of pro-Iran forces in the region.

Yet, it is abundantly obvious that these strikes also have geo-strategic connotations, in light of Secretary of State Mike Pompeo’s outreach to leaders in Israel, the UAE, and Saudi Arabia immediately after launching the strikes, which were denounced by Iraq and Syria as a flagrant violation of their sovereignty.

With Saudi and UAE officials warming to the notion of a thaw in relations with Iran, Pompeo’s intention is clearly to neutralize that prospect, which runs contrary to US hegemonic interests in the region. The dependency of Gulf Arab states on the US means they are mortgaged to a sustained rivalry with Iran, which is pushing its own peace card in the region while simultaneously upping the ante against US dominance.

But it would be a mistake to reduce the sum of US President Donald Trump’s intentions behind the recent airstrikes -and most importantly a miscalculated risk like Soleimani’s assassination – to the external circumstances in Iraq and the region, and to overlook the distinct possibility that Trump is drawing from the old playbook of instigating a foreign crisis as a diversion from the domestic perils to his presidency. This recalls how Bill Clinton, back in 1998, ordered an airstrike on Iraq on the eve of an important impeachment vote.

Likewise, seeking to deflect attention from the impeachment process, which has gained momentum by the disclosure of more damning evidence suggesting a “quid pro quo” with respect to Ukraine, Trump, and his foreign policy team are counting on the political dividends of his latest “standing up” to Iran – including with respect to Iraqis’ assault on the heavily fortified US embassy in Baghdad.

Thus, the entire mainstream US media has lined up behind Trump, crediting him with prudent use of force and patting him on the shoulder for putting aside his earlier reservations overuse of force. But little of that US media propaganda for a warmongering US policy – which stands in direct violation of international law – washes with the local population in the region, as even the New York Times has admitted that Iraqis across the political spectrum were united in condemnation of the US attacks, which killed and wounded dozens of Iraqis.

As a result, the tables have turned on the US, and no matter how many tweets Trump sends to the Iraqi people exhorting them to direct their anger against Iran, the die has been cast – and the new level of anti-Americanism seen in Iraq today is unlikely to recede anytime soon. 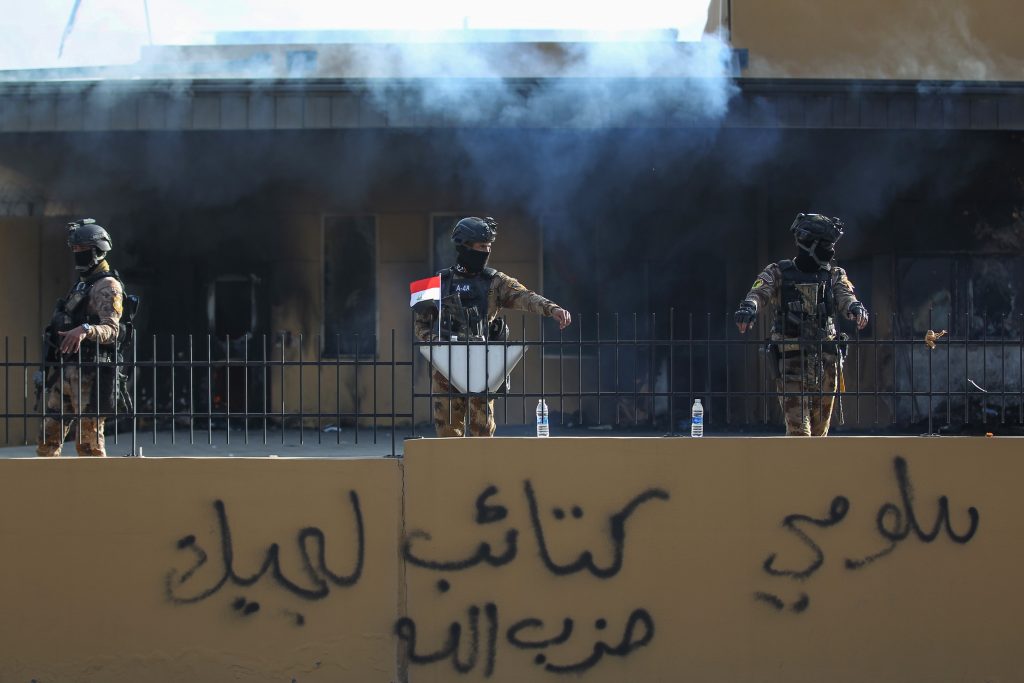 Iraqi security forces are deployed in front of the US embassy in the capital Baghdad, after an order from the Hashed al-Shaabi paramilitary force to supporters to leave the compound on January 1, 2020. – Thousands of Iraqi supporters of the largely Iranian-trained Hashed had encircled and vandalized the embassy compound yesterday, outraged by US airstrikes that killed 25 fighters of the military network over the weekend. (Photo by AHMAD AL-RUBAYE / AFP)

Already, the powerful Sadr faction has called on other Shia political factions to unite to expel the US from Iraqi soil.

As the situation escalates with the killing of both Soleimani and the deputy head of the Popular Mobilisation Units (PMU), it is fair to bet that the US has miscalculated the ramifications of its military action, which has elicited the promise of revenge and retaliation from the Iraqi PMU. The pro-Iran militia will likely freeze or reverse their integration process with the Iraqi armed forces, particularly if they feel Baghdad’s reaction to Trump’s transgression of Iraq’s sovereignty is insufficient.

Right now you have a lot of Americans across the region (as well as US allies) who are feeling pretty vulnerable. Iran’s retaliation will probably be carefully calculated rather than all out, but waiting for it (and any wider fallout) will be nerve-wracking.

The new blow to Washington-Baghdad ties caused by this latest dramatic developments also goes against US national security interests, even though it may serve Trump’s personal interests vis-a-vis impeachment.

In essence, this reflects a bifurcation of interests, whereby Trump may end up inflicting severe damage to US interests abroad by creating an artificial crisis to save his own presidency, wrapping himself in the flag and tapping into the hidden reservoir of American jingoism to neutralize the attrition facing his presidency.

It is difficult to overestimate the grave American error in perpetrating this state-sponsored act of terror that will most likely trigger a deadly cycle of violence exacting many lives.

Nonetheless, it is in the US’s interests to prevent the deepening of the Iraq crisis that it has willfully generated, and yet lacks full control to contain.

Essentially, an outgrowth of the US-Iran crisis has played out inside Iraq, which could escalate well beyond “shadow wars” and the use of proxies, with unpredictable twists that present a clear risk to the thousands of US military personnel in the region – not to mention the health of the global economy, which is tied to the free flow of oil through the Strait of Hormuz.

Playing with fire to shore up his flagging presidency, undermined by the sting of impeachment, Trump is now showing all the symptoms of a trigger-happy president apt to cause another calamitous Middle East war, thus betraying his pledge to avoid getting the US entangled in another conflict.

Sadly, as his misguided policies with respect to both Iran and Iraq clearly show, Trump is not only repeating the impeachment ploy of his predecessor, but he is also on the verge of recycling the errors of the Bush-era wars in the Middle East.

Nader Entessar is a Professor Emeritus in the Department of Political Science and Criminal Justice at the University of South Alabama.
Kaveh Afrasiabi, PhD, is a former political science professor at Tehran University and the author of several books on international affairs and Iran’s foreign policy. His writings have appeared on several online and print publications, including UN Chronicle, New York Times, Der Tagesspiegel, Middle East Journal, Harvard International Review, Bulletin of Atomic Scientists and The Guardian among others.
Donald Trump Iran Qassem Soleimani Wars and Militarism
Donations to "Popular Resistance" are tax deductible through our fiscal sponsor:
The Alliance for Global Justice, 225 E. 26th St., Suite 1, Tucson, AZ 85713