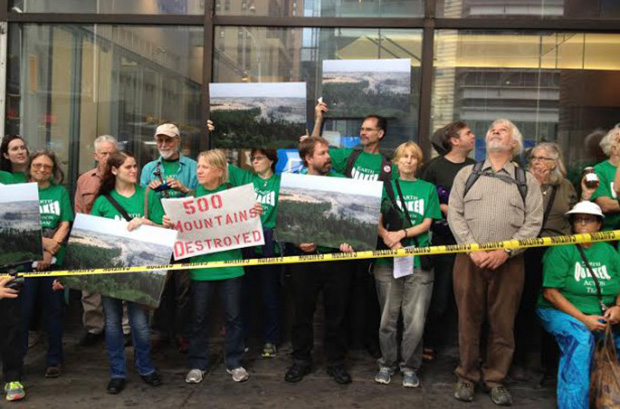 Bowing to pressure from Quaker environmentalists, today PNC Bank announced that it will be restricting financing of mountaintop removal coal mining in Appalachia. The shift outlined in its 2015 Corporate Responsibility Report means PNC Bank will effectively cease its investment in this controversial practice.

In 2012 PNC Bank financed Alpha Natural Resources, Arch Coal, CONSOL Energy, and Patriot Coal, which together were responsible for nearly half (44.97%) of Appalachian mountaintop removal production (1). PNC’s total investment was $687.5 million for that year.

The grassroots group leading the charge for PNC’s new policy, Earth Quaker Action Team, hails the change as a major shift by the seventh largest US bank. “When we initiated our campaign in 2010, PNC attempted to placate us with a hollow policy. It’s good to see that PNC Bank is now taking meaningful steps,” says Matthew Armstead, staff coordinator for EQAT. “Since this shift happened because of external pressure, it should be a wake-up call for everyone that the power of change lies with regular citizen activists.”

According to EQAT’s analysis, PNC’s changes in investment will sever ties with the two largest companies (Alpha and Arch). Given Patriot Coal’s bankruptcy and CONSOL Energy’s imminent shifting out of mountaintop removal, PNC Bank will be left without any major investments in mountaintop removal.

Mountaintop removal has long been criticized for its negative environmental and health impacts. This process of getting coal from a mountain involves blowing up the top of the mountain and dumping the remains into rivers and valleys. The contaminants from the dynamite hang in the air and the sludge and residue from this process poisons water (2). Scientists note the impact of burning dirty coal is speeding up global climate change.

Released today, PNC’s 2015 Corporate Responsibility Report began their new policy by admitting they were “driven by environmental and health concerns.”

Rainforest Action Network (RAN), a watchdog expert on the energy sector, issued a statement: “We see today’s news as indicative of a broader trend within the financial sector. Banks no longer want to be associated with a dangerous, abhorrent practice like mountaintop removal; there is an emerging financial industry consensus that these practices are unacceptable. Concretely, this means mountaintop removal companies will have a harder time securing financing to operate and expand in the future.” PNC follows in the footsteps of other banks pressured to adopt policies cutting ties with firms specializing in mountaintop removal: JPMorgan Chase, Wells Fargo, RBS, BNP Paribas, and UBS.

Dustin White, an 11th-generation native Appalachian with Ohio Valley Environmental Coalition, lauded the tiny Quaker environmentalist organization for making this change. “PNC’s new policy is a step in the right direction, and we applaud our friends at EQAT for their success in moving this big bank to do the right thing. For over 150 years, Big Coal has endangered our health, our heritage, and our homes.”

For members of Earth Quaker Action Team this is a major victory from a long campaign. “In our early encounters with PNC, they didn’t take us or this issue seriously. We showed them evidence, delivered them Appalachian water poisoned by mountaintop removal, and brought them face-to-face with residents hurt by this practice,” says George Lakey, a retired teacher who was arrested twice during the campaign. “We had to take direct action for them to see the light.”

Earth Quaker Action Team (EQAT) is a grassroots, nonviolent social action group founded in 2009 by Quakers and inclusive of people of all faiths or no faith, who join with millions of people around the world fighting for our threatened planet.

For a timeline of the campaign, see A Brief History of the EQAT Campaign.
More information is available at: www.eqat.org.