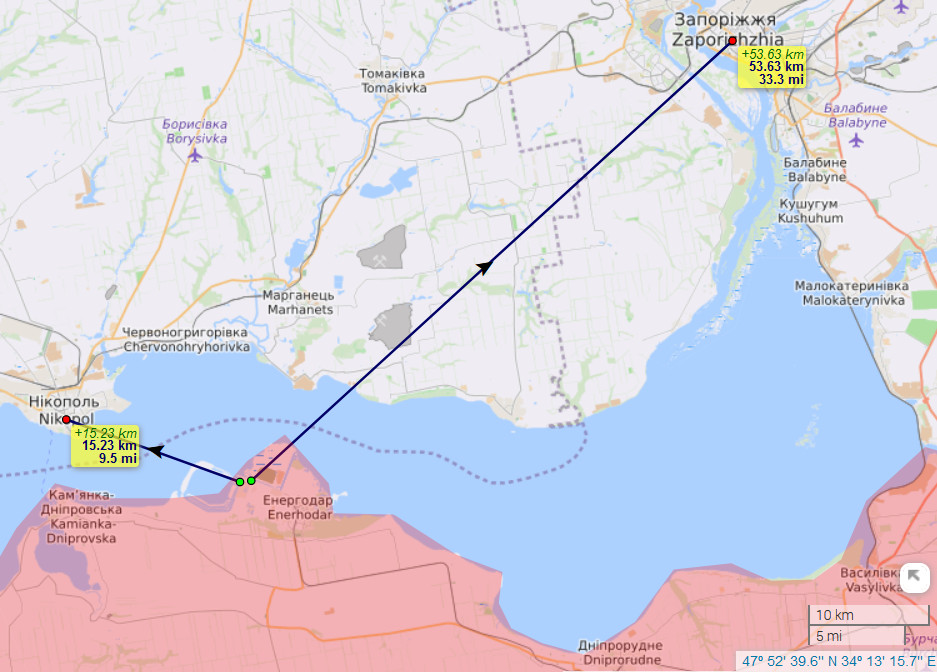 The news about the war in Ukraine is getting so fake that even an amateur can debunk it no time.

Across the river from Ukraine nuclear plant, shelling adds to fear.

In Nikopol, just two miles across the Dnieper River from the Zaporizhzhia Nuclear Power Plant, the threat of imminent nuclear catastrophe is compounded by daily shelling from Russian forces near the plant.

The real distance between the Zaporizhzhia Nuclear Power Plant and Nikopol is 15 kilometers (9 miles) not “just 2 miles”.

Nikopol is too close to the plant for sirens to be of use — there’s no time to switch them on. Instead residents on the other side send warnings if they see artillery batteries being rolled out.

The well protected six reactor blocks of ZNPP can be seen in the upper left of the picture. The next civilian settlement is on the right side, some 2+ kilometers away from the plant with several big buildings between the two.

How anyone would see “artillery batteries being rolled out” at the plant is beyond me. The Russian side of course insists that there is no artillery at the ZNPP and that the Ukrainians are shelling the plant. Which makes sense as the plant is, since early March, under complete control of the Russian side.

This misreporting by the Washington Post comes after it published a big fake story about an alleged Russian intelligence failure at the beginning of the war:

Just consider this circular sourcing of the story:

In the final days before the invasion of Ukraine, Russia’s security service began sending cryptic instructions to informants in Kyiv. Pack up and get out of the capital, the Kremlin collaborators were told, but leave behind the keys to your homes.

The communications exposing these preparations are part of a larger trove of sensitive materials obtained by Ukrainian and other security services and reviewed by The Washington Post.

Ukraine’s security agencies have scored notable victories. Early on, a Ukrainian nongovernmental organization published what it described as a roster of FSB operatives linked to the war effort, posting the identities and passport numbers of dozens of alleged spies in a move meant to disrupt the agency’s plans and rattle its personnel. A person connected to the NGO, which is called Myrotvorets, or Peacemaker, said the data was obtained by Ukraine’s security services. The person spoke on the condition of anonymity, citing threats to his security.

Details published by Peacemaker and confirmed by Ukrainian security officials describe Kovalenko as a 47-year-old veteran of the spy service who in recent years was responsible for managing the agency’s clandestine ties to Ukraine’s parliament and main pro-Russian party.

The extremist rightwing  ‘NGO’ Myrotvorets is not independent but run by the Ukrainian secret service. It is known for publishing ‘kill lists’ of alleged ‘enemies of Ukraine’:

The site reflects the work of NGO “Myrotvorets centre”, led by a person only known with the alias “Roman Zaitsev”, former employee of Luhansk Security Service of Ukraine office. The website is allegedly curated by the government law-enforcement and intelligence agency Security Service of Ukraine (SBU) and was promoted by Advisor to the Ministry of Internal Affairs of Ukraine Anton Gerashchenko. The identity of the staff is secret, and a hidden panel sifts through information, often collated from Open-source intelligence, as well as information provided by individuals on a confidential basis.
…
On 24 May 2016, Committee to Protect Journalists wrote an open letter to then Ukrainian President Poroshenko urging him to “condemn the unfounded and damaging allegations published on Myrotvorets, and to clarify publicly that the Ukrainian Interior Ministry is dedicated to protecting journalists and apprehending the people responsible for threatening them, in contrast to Interior Minister Avakov’s previous statements”.On 2 June 2016, G7 ambassadors to Kyiv released a joint statement expressing deep concern about disclosures of journalists’ personal data on the Myrotvorets website and called on the Myrotvorets team to withdraw personal data from public access.

Other such lists put out by the Ukrainian government accuse U.S. political scientists and journalists of pro-Russian disinformation.

That still means that the only source of that alleged ‘data’ are “Ukraine’s security services” which, as the Washington Post notes, “have an interest in discrediting Russia’s spy agencies”.

That make the whole story about the alleged FSB failure a garbage in-garbage out product based on a sole source, the fantasies created by the Ukrainian secret services.

Which altogether tells you something about the ‘quality’ of Ukraine war reporting by the Washington Post.