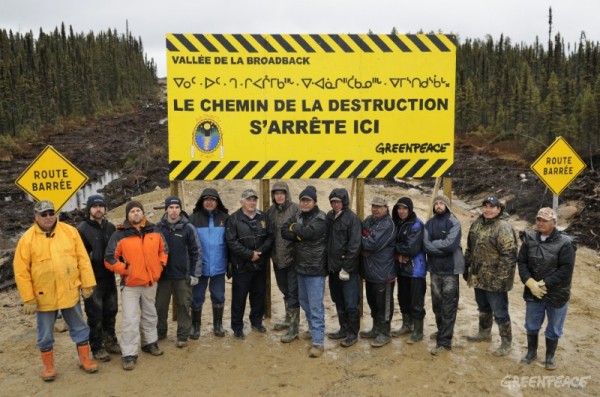 Some Cree in Northern Quebec are teaming up with Greenpeace to pressure the Quebec government to finally move ahead with an ambitious conservation plan in the James Bay region.

They also want the candidates running for premier in the current Quebec election to commit to protecting more than 13,000 square kilometres of intact forest.

So far in the election campaign, there has been little discussion of environmental issues.

”Once these areas are gone, there will be no place left in Waswanipi to show our children what the forest was once truly like when our elders thrived there.’– Paul Gull, chief of Waswanipi

Recently Cree hunters, guides and elders from Waswanipi, along with several members of the Greenpeace Quebec team, took a group of journalists on a four-day expedition into an area known as the Broadback Valley. It’s more than 600 kilometres north of Montreal, near the communities of Waswanipi, Oujé-Bougoumou and Nemaska. 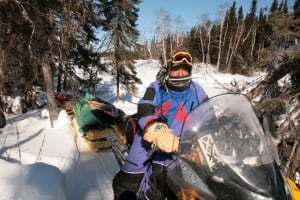 Last week, Cree hunters, guides and elders, along with members of Greenpeace Quebec, took a group of journalists on a four-day expedition into an area known as the Broadback Valley. Don Saganash, master trapper, joined the expedition. (Annie-Claude Roberge/ Waswanipi Cree Nation)

“Once these areas are gone, there will be no place left in Waswanipi to show our children what the forest was once truly like when our elders thrived there.”

“So that last 10 per cent is really important for them to protect,” said Nicolas Mainville, director of Greenpeace Quebec and one of the people who helped organize the expedition. About 90 per cent of the land around Waswanipi has been fragmented or clear cut by forestry companies, according to Greenpeace Quebec.

Among the journalists on the expedition was a team from Agence France Presse. The Cree and Greenpeace are hoping to get some international attention to their efforts to protect one of the largest and last remaining intact parts of Quebec’s Boreal Forest.

“It’s extremely precious for the Crees, but it’s also very valuable for Quebec in terms of the potential of conservation,” said Mainville.

Last April, the Grand Council of the Crees released the Broadback Watershed Conservation Plan, an ambitious plan to create a protected area that would be jointly managed by the Cree Nation and Quebec.

At the time, Grand Chief Matthew Coon Come said, “The Crees have been fortunate enough to receive wide support for their conservation efforts in the past.”

“We hope that this support continues for our efforts to protect the Broadback River for benefit, not only of the Crees and the residents of James Bay, but for all who appreciate the importance of retaining rare intact ecosystems,” Coon Come said.

Discussions were already underway between Coon Come and Parti Québécois leader Marois, according to Mainville, when the election was called.

In 2011, the Quebec government of former premier Jean Charest set aside part of the area as a national park reserve called the Assinica National Park Reserve.  It is 3193 square kilometres of territory, located about 20 kilometres north of the village of Oujé-Bougoumou.

The Broadback conservation plan would establish a core of fully protected areas measuring some 9,355 square kilometres along the river. With the rest of the proposed area, special buffer zones would be created where some controlled development would be allowed. The area is an important habitat for the endangered woodland caribou herds.

After 10 years of trying to protect the area, Waswanipi Chief Paul Gull finds himself frustrated.

“What we are looking for is a response from the government on what they are going to do with this. Because they are not talking or they are not saying anything. They have a certain amount of land they want to protect in the region and we want (to know),” said Gull.

While there is currently a moratorium on logging in the Broadback Valley, the Cree and Greenpeace say more needs to be done to ensure it’s long term protection.

Quebecers will vote on April 7.