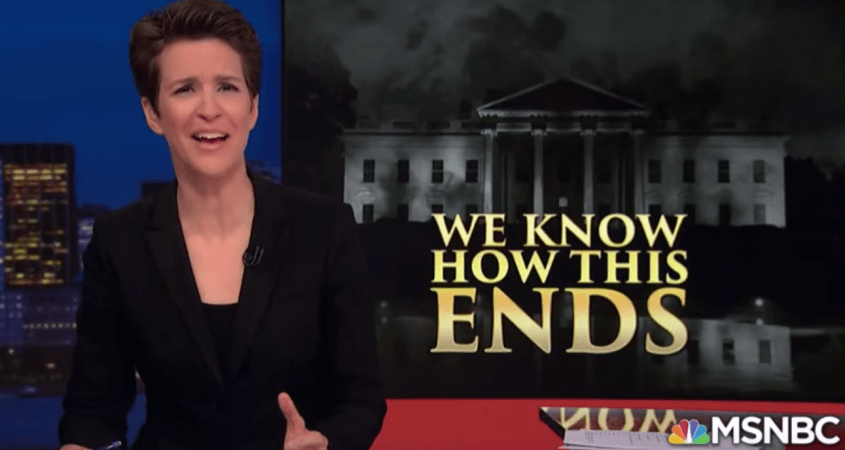 Rachel Maddow Endorses Regime Change In Venezuela To “Push Russia Back,” Sympathizes With Bolton And Pompeo

Note: Senator Bernie Sanders made a factually inaccurate statement in the last Democratic Party presidential debate on September 15. He said:

“Let me be very clear. Anyone who does what Maduro does is a vicious tyrant. We need international and regional cooperation for free elections so the Venezuelan people can create their own future.”

We join Alliance For Global Justice in urging people to call Sanders to withdraw his comment.

“Senator Sanders. Withdraw your demand for an international force to invade Venezuela.  U.S. Hands off Venezuela. Stop your slander of President Nicolas Maduro, issue an apology to the Venezuelan people, and join the anti-intervention movement now!”

The top-rated MSNBC host took her trademark brand of liberal militarism to new levels by branding efforts to avert a catastrophic war against Venezuela as – what else? – colluding with Russia.

The loudest voice among the corporate media hack pack doubling down on Russiagate conspiracies is MSNBC’s, Rachel Maddow. On May 3, Maddow took her propaganda to an entirely new level of militaristic cheerleading, launching into a rant that offered de-facto encouragement for the current neocon cause-du-jour: regime change in Venezuela.

Maddow not only cast Trump as a Russian stooge for daring to discuss – and possibly de-escalate – the Venezuelan crisis with Russian President Vladimir Putin, the top-rated liberal cable news host expressed sympathy for John Bolton and Mike Pompeo, the most militaristic members of the Trump administration.

Since the Trump administration first launched its coup attempt against the government of President Nicolas Maduro in January, Maddow and other conspiracy theorists have done their best to ignore it. For one, acknowledging this brazen coup effort would show their hyperventilation about “the Russian attack on our election” to be a hypocritical farce: it is far more difficult to liken stolen emails and juvenile Russian social media posts to Pearl Harbor or 9/11 when your supposedly “defenseless” country is openly trying to overthrow a foreign government via lethal sanctions, propping up the coup plotters, and trying to trigger a military revolt.Furthermore, the Trump administration’scoup attempt in Venezuela  is yet one more development that undermines the notion of Trump and Putin secretly colluding to destroy American democracy. Indeed, Venezuela is one more site of US and Russian conflict, with Trump presiding over an unprecedented escalation of tensions.

As the Financial Times noted in February, as Russia pushes back against Trump administration attempts to remove the Maduro government through internal destabilization, “it is clear that the US and Russia are engaging in a new sort of proxy conflict in America’s backyard.” Last week, Politico observed that the conflict over Venezuela has become “a proxy battle… [threatening] a return to the tense Cold War years.” The Trump administration’s Venezuela compliments many other dangerous developments – Trump pulling out of the INF treaty; sending arms to Ukraine; seeking to block a German-Russia gas pipeline; increasing U.S. troop deployments to Russia’s borders, and many, many more examples that have simply tumbled down the memory hole.

As I documented in a recent Twitter thread, Maddow has been “leading purveyor of now debunked Trump-Russia conspiracy theories, falsehoods and innuendo of the last 2+ years.” Looking back, I should have mentioned that Maddow has also been a vocal promoter of unhinged propaganda that encourages perilous tensions with Russia, and cultivates pro-war opinion among her base of extremely suggestible liberal viewers.

When Maddow finally broke her silence on Venezuela, it was on May 3, after Trump held a phone call with Putin to discuss, among other things, lowering the temperature on Venezuela. The diplomatic contact between two world leaders should have been considered routine, but in the feverish world of liberal conspiracism, it was another opportunity for hallucinatory claims of collusion and the posting of homophobic Trump-Putin memes on social media.

After a week of saber-rattling by Washington and a failed, violent coup attempt in Caracas, Maddow launched into an indignant pro-war diatribe:

Maddow: “Even though his whole administration spent all week saying that Russia was interfering in Venezuela, and propping up the Venezuelan dictator there, turns out President Trump now says: Putin isn’t doing that at all, because Putin told him so.

…And so, hey John Bolton and hey Mike Pompeo, are you guys enjoying your jobs right now? You each thought your job this week was to name, and shame, and threaten, and counter Russian government involvement in Venezuela while saber-rattling about how everybody else better get out of the way because the US is really mad about it. Guys, turns out your actual job is figuring out how and why you work for a president who says whatever Vladimir Putin tells him.”

Maddow went on to offer empathy for National Security Advisor John Bolton, noting that he had just told CNN this week that “the Russians like nothing better than putting a thumb in our eyes” and that their “behavior is unacceptable to us.” Maddow then mocked Bolton not for his hawkishness, but for the obvious incongruity between his stance and Trump’s:

How do you come to work anymore if you’re John Bolton? pic.twitter.com/gYfuZANiaS

Maddow: Yeah, you though that was your job. But not all. Not after Vladimir Putin gets done with President Trump today…. This is who you’re working for. You thought your job was to push Russia back because of what they’re doing in Venezuela. The president spent an hour on the phone with Vladimir Putin today. Putin told him he’s not in Venezuela so now the new position of the U.S. government in Venezuela.

Trump’s conciliatory comments track with accounts that have emerged of him being out of step with his top officials’ push for a coup in Venezuela. Trump, CNN reports, has been “expressing frustration that some aides are more openly teasing military intervention” in Venezuela. He has also “privately express[ed] concern over how solid [coup leader Juan] Guaido’s plans are to take power and win support from Venezuela’s military,” and has begun to “ask questions about the reliability of US intelligence that suggested senior members of Maduro’s inner circle were preparing to defect.”

Whether accounts of Trump’s second-guessing are correct or not, it is one more indictment of the delusional Russiagate media culture that one of its leading voices, Maddow, is actually discouraging a peaceful outcome in Venezuela, rather than welcoming moves towards de-escalation.