Above Photo: 30 November 1991: Barack Obama, then a young social activist, speaks to local youths in the South Side of Chicago about ‘Project Vote’. Photograph: Polaris / eyevine

Ahead of President Obama’s farewell speech in Chicago this week, the author of a celebrated book about the city explains how it works as a microcosm of the US, with its legacy of policies reinforcing ethnic and economic divisions

In a couple of days, President Barack Obama will give a farewell speech in his adopted hometown of Chicago. This is the city to which he moved as a young man in the 1980s, to work asacommunityorganiser, inspired by Harold Washington, the city’s first black mayor. Chicago is also where Obama met his wife, Michelle, a native of the city, had two daughters and launched a dazzling political career.Obama’s swan song will take place a touch north of Bronzeville, the South Side neighbourhood historically known as the “Black Belt”. When African Americans left the south in droves a century ago as part of the great migration, this is where they landed if Chicago was the final destination. Authors Richard Wright and Gwendolyn Brooks wrote stories and poems set in that milieu. Jazz flourished. Black businesses boomed. Politics prospered.

Chicago is arguably the capital of black America. The legacy of African Americans reverberates from the Johnson Publishing Company, with its flagship publication Ebony, to multiple black hair-care companies to the first black US congressman elected in the north. All of this before Oprah Winfrey set roots here.

It’s not by accident, then, that the country’s first black president came from Chicago. It was preordained. Chicago, notably the South Side, where most black folk live, reeks of soul. That soul dances in the air in the form of house music, gritty blues, the plumes of smoke from barbecue joints, lounges that cater to “stepper sets”, a unique partner dance.

I imagine none of these scenes registers as what black Chicago is or has to offer to outsiders. The dominant narrative is that the city is full of wartorn corners, with gun-toting black and brown people. Violence has been the singular elephantine story ever since Obama took office in 2009. It’s a fetish. It’s reductive. It’s an incomplete story. We are not Chi-raq, the inane phrase that compounds “Chicago” and “Iraq” in an attempt to describe shared levels of violence.

Chicago murders may make the headlines, but our problems of violence actually stem from something larger, something many other American cities face: racism, segregation and inequity. Chicago is a microcosm of a larger American story. Uprisings in Ferguson, Missouri, and Baltimore illustrate the racial tension that’s in part defined by deep-seated housing segregation.

On New Year’s Day, my aunt hosted the family for a feast at her house, in an integrated South Side neighbourhood. We ate black-eyed peas, a tradition within the black community, eaten for good luck on 1 January. Tradition says to eat greens (collard, mustard, turnip – take your pick) for money. My aunt made coleslaw, instead, to go with her insanely delicious, perfectly fried chicken.

A family friend suggested that we turn on the CBS news magazine show 60 Minutes, which was set to air a segment on Chicago violence. Murders in 2016 had clocked in at more than 700. Wall-to-wall media coverage dominated the weekend.

I quickly piped up in between sips of an apple martini: “Please, let’s not.” I had little faith that the story would move beyond the routine tropes. We keep being told how violent we are. We hear the murder tallies on Monday mornings or on a daily basis. They don’t really tell us much. We get collective hand-wringing and we internalise the message that we’re only violent, in the process erasing or ignoring our own histories and capabilities.

I’m not wearing blinkers about the violence that ravages family and community. I’ve seen the despair and despondency in some neighbourhoods that have high rates of home foreclosures, preventable diseases, unemployment and poverty. This is what violence looks like. I’m not sheltering myself from a problem that is the city’s problem as a whole. I’m just tired of the framing.

Turns out I likely saved our new year holiday by not turning on 60 Minutes. Saved us from becoming infuriated. The segment, called Crisis in Chicago, did not get to the deep causes of violence and was skewed heavily towards the police. Ousted former police superintendent Garry McCarthy accused the Black Lives Matter movement of creating anti-police sentiment. Black Lives Matter didn’t do that. Look more, instead, to the video of black teenager Laquan McDonald, shot 16 times by a white police officer, eroding already tenuous trust in the Chicago police department. The US Department of Justice is investigating the department and activists have been steadfast in pushing reform in the wake of consistent documented police brutality or misconduct.

And consider the response of the Chicago Urban League, a group dedicated to “empowering African American communities”. Its president, Shari Runner, criticised CBS and released a statement: “Crisis in Chicago was an opportunity to present a complete story of Chicago gun violence that showcased the perspectives of both the victims and perpetrators equally. It instead furthered the false narratives that continue to burden the black community, rehashing negative stigmas and attempting to gain sympathy from unlawful policemen.”

While denouncing such skewed media portraits on Facebook, a friend posted an article from the Atlanta Journal-Constitution about so-called America murder capitals, according to 2015 FBI crime data. Chicago is ranked 24th in this grim table, which is headed by St Louis. People conflate murder rate with raw murder numbers, whereas the table takes account of population size, noting murders per 100,000 residents.

If Chicago isn’t Chi-raq or the murder capital of the world, murder capital of the US or even of the midwest, what are we? We do have more murders than Los Angeles and New York, cities with larger populations. And Chicago does have the dubious distinction of being the urban face of gun violence. On the presidential campaign trail, Donald Trump joined the fray by calling inner cities such as Chicago “hell” for African Americans and Hispanics. He bragged that he could solve crime in a week. Recently, as president-elect, he said that Chicago needed federal assistance to fight crime. But his ideas seem to be about law and order and more policing, instead of urban investment.

There’s often talk about two Chicagos – one with the gleaming skyline close by Lake Michigan, with magnificent architecture, renowned museums and theatre. The other Chicago is defined by a shrinking middle class, joblessness on the South and West Sides and poor performing schools.

I challenge this binary account while not disagreeing with the descriptions. Chicago is all of those things and more. There’s a myth that black people’s communities wait for government handouts, whereas many volunteer neighbourhood organisations, block clubs and ad hoc groups have people dedicated to improving their areas, even in places that have been written off as the most violent. There’s also an overlooked joy in black communities. Life and verve do exist.

What obstructs these communities is not collective inefficacy but a long legacy of housing segregation and policies that reinforce that status quo. As vibrant as the Black Belt was, African Americans had no choice but to live there when their population swelled in the 1900s. Racially restrictive housing covenants prevented whites from selling homes to blacks until 1948. “Redlining” allowed banks not to give home loans to blacks. Public housing was contained to black areas. 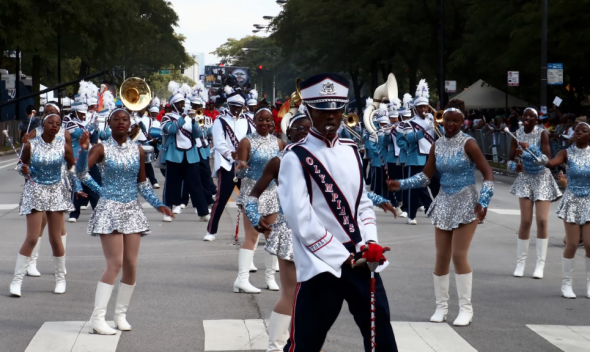 The annual Bud Billiken parade, which has been held since 1929 in Chicago’s Bronzeville neighbourhood. Photograph: Anadolu Agency/Getty Images

Later, white flight turned white neighbourhoods black in a decade and those white families benefited from the federal government, which built highways and favoured suburban home loans for them. Today, affordable and open housing continues to be a fight in the region. Public school officials eschew opportunities for integration. Black home values are consistently less than those of white homes. Predatory lending still happens.

Noting the local persistent segregation, which translates into unequal public and private resources, the Chicago Urban League is unveiling a 10-year blueprint for a more equitable city. It is taking on systemic and structural issues around race. This is how to address violence, the blueprint argues.

Meanwhile, the city is hiring more police officers, which, as one journalist quipped, is a solution for white folk.

All Chicago denizens need to embrace the city’s vexing violence problem if we want change. For so long, the problem has been seen as something “other” by people who live far away from gun shots. Segregation allows residents to stay in their racial enclaves and effectively brush off troubles that don’t directly or personally touch them.

If Obama does address violence in his speech, I hope he concentrates on these wider, deeper, historical issues. That would be a worthwhile parting message.