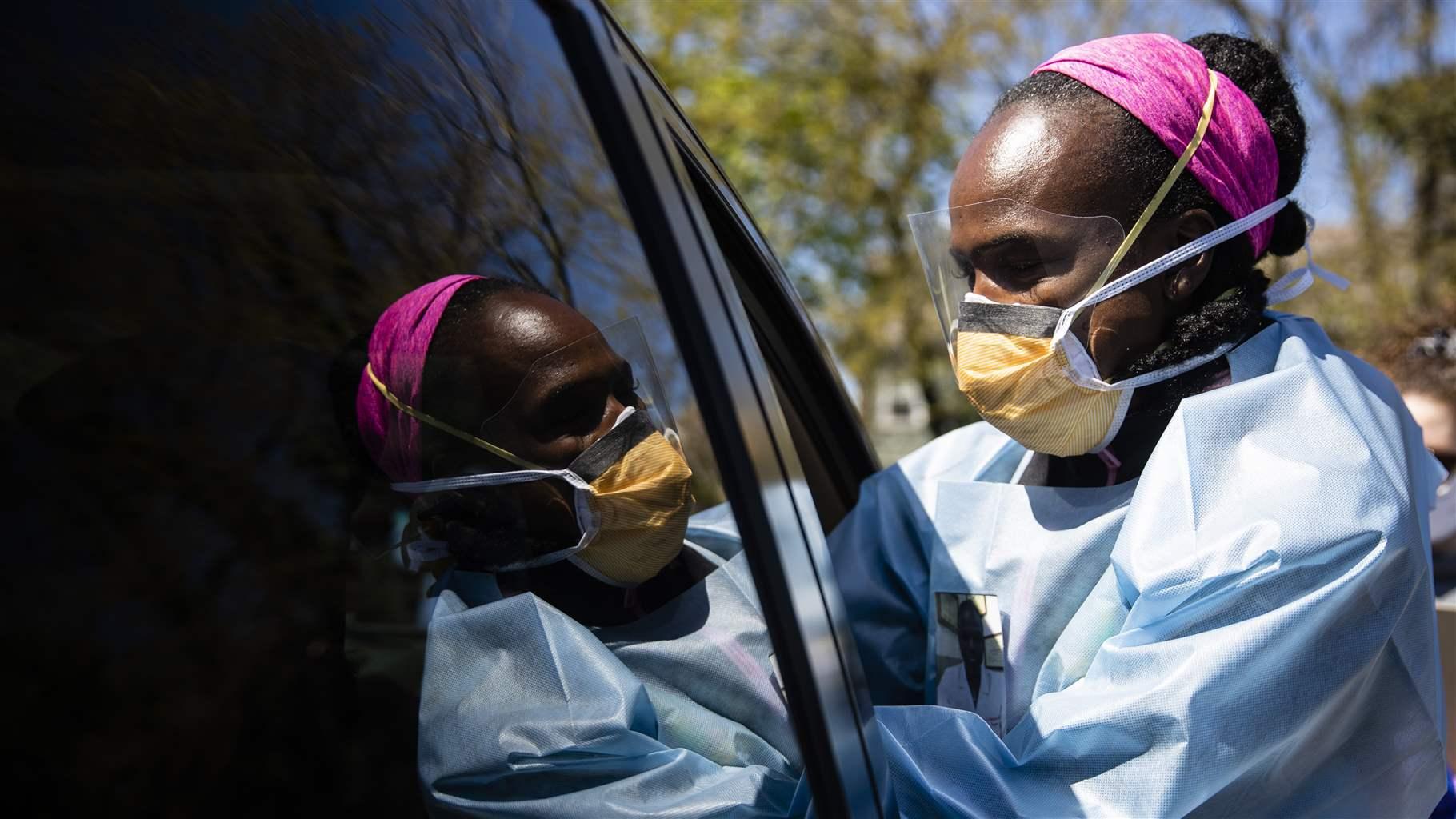 Racism Is A Public Health Crisis

Being black is bad for your health. And pervasive racism is the cause.

That’s the conclusion of multiple public health studies over more than three decades. “We do know that health inequities at their very core are due to racism,” said Dr. Georges Benjamin, executive director of the American Public Health Association. “There’s no doubt about that.”

The data is stark: Black women are up to four times more likely to die of pregnancy related complications than white women. Black men are more than twice as likely to be killed by police as white men. And the average life expectancy of African Americans is four years lower than the rest of the U.S. population.

The bleak statistics have helped convince more than 20 cities and counties and at least three states, Michigan, Ohio and Wisconsin, to declare racism a public health crisis.

Supporters say the designations are meant to spur changes across all sectors of government — including criminal justice, education, health care, housing, transportation, budgets and taxes, economic development and social services — with the goal of shrinking the health gap between African Americans and white Americans.

But the declarations generally do not prescribe specific actions or allocate money, which is why some critics say they don’t go far enough. 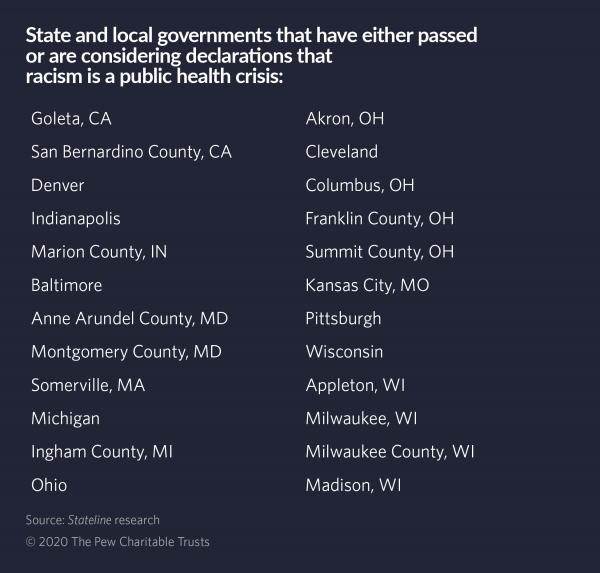 The Indianapolis City-County Council this month declared racism a public health crisis. But critics dismissed the action: The Baptist Minister’s Alliance, National Action Network of Indiana and the Concerned Clergy of Indianapolis said it “had no true depth,” according to the Indianapolis Star.

“People say nothing has changed. But things have changed, and it’s important to acknowledge that,” said Dr. Leana Wen, an emergency physician and public health professor at George Washington University.

As a former Baltimore Health Commissioner, Wen said, “When I talked about racism as a public health issue, it was a rallying cry, a theme that we would convene our stakeholders around, not only the health department but also our partners, and really start addressing issues with a racial lens.”

In Wisconsin, Democratic Gov. Tony Evers said at a news briefing earlier this month: “We cannot look away from the reality that inaction, indifference and institutional racism has harmed generations of black and brown Wisconsinites.”

In Congress, U.S. Sen. Sherrod Brown, an Ohio Democrat, introduced a resolution to declare racism a public health emergency. He said in a news briefing that greater investment in public health and a better understanding of racial health disparities would help reduce the racist health gap.

The American Medical Association, the American Academy of Pediatrics and the American College of Emergency Physicians also have declared institutional racism an urgent public health issue in statements and vowed to eradicate racism and discrimination in health care.

“The tide has changed in a pretty short period of time,” Wen said. “I got a lot of raised eyebrows when I first started using that word as a label. You needed to first flag racism as even being related to public health before you could start calling it a public health emergency.”

But when a 25-year-old black man, Freddie Gray, died in Baltimore Police custody in 2015, Wen said she tried to highlight racism as a public health issue.

Still some elected officials have questions. Last week, as Ohio lawmakers discussed whether to declare the public health crisis, Republican state Sen. Steve Huffman wondered aloud if more black residents were getting COVID-19 because they have poor hygiene.

“Could it just be that African Americans or the colored population do not wash their hands as well as other groups? Or wear a mask? Or do not socially distance themselves?” said Huffman, who is an emergency room doctor. “Could that be the explanation for why the higher incidence?”

Huffman clarified that he meant to say “people of color” rather than “the colored population,” and that he had asked the question to further his understanding. His employer, TeamHealth, subsequently fired him.

But after class and poverty are accounted for, African Americans still have worse health outcomes than white Americans.

Public health studies have shown that the racism African Americans experience in their daily lives creates stress that affects their internal organs and overall physical health. This results in a higher prevalence of chronic diseases such as high blood pressure, asthma and diabetes, and a shorter lifespan.

The health equity gap between wealthy African Americans and well-to-do whites is even wider. A 2018 study by researchers at Ohio State University found that “racial disparities in health tend to be more pronounced at the upper ends of the socioeconomic spectrum.” The cause? “Acute and chronic discrimination,” the researchers said.

By all accounts, Wisconsin was the first state where local governments declared racism a public health emergency.

In 2017, the University of Wisconsin Population Health Institute began talking to the Wisconsin Public Health Association about urging local governments, health care organizations and individuals to declare racism a public health emergency and commit to fighting it. The first to do so was Milwaukee County, home to Milwaukee, which has been deemed one of the most segregated cities in the country.

According to Nicole Brookshire, director of the county’s Office on African American Affairs, more than 4,000 county employees, including judges and police, have received racial equity training since last year’s declaration. The county also has developed a budgeting tool its agencies must use to ensure that expenditures, budget cuts and capital investments are racially equitable.

Paula Tran Inzeo, director of community engagement for the University of Wisconsin institute, said she considers the initiative a success because local governments, hospitals and other organizations continue to sign on. “That’s a measure of progress, because you can’t sign on unless you commit to taking action.”

“People tend to think of racism as an individual thing that’s regrettable,” he said in an interview with Stateline. “But they don’t connect the 400-plus years of systemic, legal racism that leads to death for many black people.”

Jawando said he plans to follow up with a proposal to change police regulations by raising the standard for justifiable use of deadly force and requiring police to intervene if they see another officer wrongfully using force.

“Whether it’s police-involved killings or disparate health outcomes where black patients can’t get treatment because they’re not seen as being sick, or financial redlining in certain ZIP codes, food deserts, or people of color getting hit by cars more often because their communities aren’t walkable, it’s ultimately due to racism,” Jawando said.

At least 1 in 4 COVID-19 deaths in Montgomery County have been black residents, Jawando said. Of the roughly 1 million county residents, 20% are black. As in other parts of Maryland, the county is deploying mobile coronavirus testing units to highly affected, primarily black communities in response to the unequal death toll.

The county’s health director, Dr. Travis Gayles, said the public health emergency declaration is intended to go beyond combatting blatant racism to address the implicit bias that he said exists in every sector of the government, as well as in health care.

In a separate effort, the county health agency is asking OB-GYNs to treat pregnant black women as high-risk patients, just as they would older pregnant women of any race, Gayles said. The high-risk designation, he said, ensures additional testing and office visits, which could result in lower black mortality, regardless of any implicit bias the doctor may have.

“I don’t think implicit bias will magically disappear,” Gayles said. “But the legislation forces the conversation to be had.”

Benjamin, the public health association director, said the rising tide of local public health declarations across the country could mark the beginning of better health outcomes for people of color.

“You can’t solve a problem until you define it,” he said. “So, the first step, the first thing you must do is name racism. Name it when you see it, you’ve got to call it for what it is. If it hurts people, if it kills people, it’s a public health issue.”