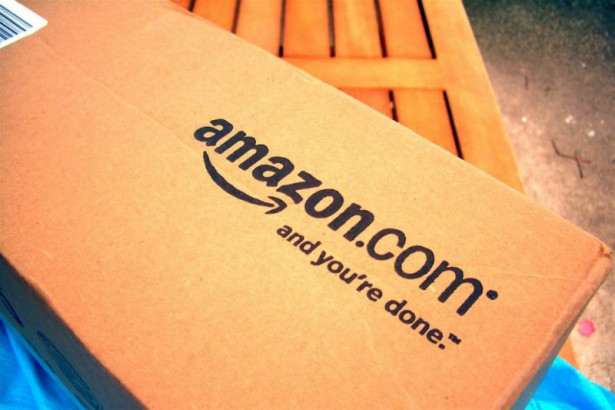 Radical Municipalism: The Only Solution To Amazon’s Extortion Of Cities

Above Photo: By Mike Seyfang

Last week saw a flurry of humiliating pitches by North American cities for Amazon to pick them as the location of the corporation’s second headquarters.

Meanwhile in Canada, Calgary released a deeply cringey video, bought a massive billboard in Seattle claiming that it would “fight a bear” for Amazon and paid for sidewalk graffiti that joked about how it would also change its name for it. NHL teams in Calgary and Ottawa led arena-wide chants pleading for the company to pick them. Winnipeg bragged in its application that it was the inspiration for Winnie the Pooh’s name.

This is the near-dystopian endpoint of the neoliberal city: gargantuan corporations forcing cash-strapped cities to publicly bid against each other with tax breaks, subsidies and crass public relations campaigns. In the excellently titled “Amazon’s New Headquarters Should Be In Hell,” author Hamilton Nolan argued: “This is what the extortion of public resources looks like.”

And the only solution is reasserting our collective right to the city.

Let’s take a look at what Amazon is actually asking for in its glorified job posting.

Firstly, the proposed location has to be close to an international airport, major highways and have “direct access to rail, train, subway/metro, bus routes.” It also has to have a massive amount of space: over 500,000 square feet for the facility by 2019, up to 8,000,000 square feet by 2027. There must be a “highly educated labor pool,” a “compatible cultural and community environment” and an “overall high quality of life.”

All of those things require historically significant government resources, including infrastructure, public transit and post-secondary education: things that Amazon assumes the automatic right to without having to pay for in exchange for the privilege of the corporate behemoth in your backyard.

Amazon’s presence in a city will also inevitably lead to massive gentrification and displacement of primarily low-income Black, Indigenous and people of colour from urban areas, as has already happened in Seattle.

Then there are the demands for a “stable and business-friendly environment and tax structure” — AKA low corporate tax rates without threat of change — and a wide range of incentives including tax credits/exemptions, relocation grants, workforce grants, utility grants and fee reductions.

This is a textbook “race to the bottom” situation, in which governments are expected to commit massive public funds to subsidize a for-profit corporation so it doesn’t lose the “opportunity” to another jurisdiction.

As the managing director of Invest Ottawa put it to CBC News, cities in the U.S. are “going to go hard at this one — they’re going to put serious cash on the table.”

That’s right: serious cash for a half-trillion company led by one of the richest men in the world, who stations ambulances outside of warehouses instead of providing air conditioning because it was cheaper.

An associated irony is that every dollar spent in the form of tax breaks and subsidies is a dollar that can’t be spent on things like public housing and mass transit. That matters a great deal given that “the costs of tax breaks for the city will far outweigh whatever benefits come from the number of jobs created,” as Margaret O’Mara put it in an interview with GeekWire.

Of course, it’s not like the Amazon bid is new.

Rapacious corporations have spent decades blackmailing governments for handouts. But this is surely one of the most brazen examples that we’ve seen. And as one of the most powerful companies in the world, Amazon could set an even worse precedent for cities going forward.

The fundamental reason that cities across the continent are debasing themselves for Amazon is that they’re woefully underfunded and straitjacketed by incessant capitalist propaganda.

It’s estimated that Canadian cities only receive eight cents of every tax dollar. Yet they provide a large chunk of services and own most public capital stock in the country. They’re also forced to rely on a politically toxic combo of property taxes and user fees, augmented by ad-hoc grants and funding arrangement from higher levels of government (especially when it’s election season).

Throw in grotesque public relations campaigns by far-right astroturf groups like the Canadian Taxpayers Federation and the Canadian Federation of Independent Business, and it makes it very difficult for a municipality to actually do its job of building and operating a city.

In turn, that represents an utter inability to launch massive job programs to build and operate public housing, mass transit, building retrofits, renewable electricity or climate adaptation infrastructure. Sure, cities could beg for handouts from higher levels of capitalist governments, but it’s very unlikely to happen in this era of cynical deficit politics, downloading austerity and refusal to even legislate municipalities as autonomous entities.

There’s only one way out of this hellscape: a fierce re-commitment to the “right to the city.”

This does not mean dedicating enormous time and resources to get leftist candidates elected to municipal councils.

There’s perhaps a place for that in some contexts: Seattle’s socialist city council member Kshama Sawant has been a fervent critic of Amazon’s impacts, and veteran anti-poverty organizer Jean Swanson would have been an invaluable addition to Vancouver’s city council if she’d won.

But the promise of truly leftist and democratic city-building that can challenge the powers of Amazon and other multi-nationals is much more than electoral politicking, which is almost always poisoned with money and influence from sectors like finance and real estate.

In the words of journalist Debbie Bookchin, daughter of the late Murray Bookchin:

That largely parallels the concept of the “right to the city,” originally coined by Henri Lefebvre and explained by Marxist geographer David Harvey:

Greater democratic control over the production and utilization of the surplus. Since the urban process is a major channel of surplus use, establishing democratic management over its urban deployment constitutes the right to the city.

Granted, these are all extremely intimidating examples. Many of them were also brutally crushed by the state. But they hold the keys to what a municipal future would look like that can actually build serious alternatives to vulturous multinationals picking at the fiscal scraps offered up by desperate cities.

They can start small, like New Orlean’s Common Ground Collective founded in the wake of Hurricane Katrina or the recent Parkdale rent strike in Toronto that beat back slumlords from spiking rent prices.

The statement released after the Parkdale victory included the declaration: “We are prepared to take up the struggles of all working class people in our neighbourhood whether around housing, education, employment, or any other area of our lives. By continuing to organize, we will become stronger and build our power in Parkdale.”

And that’s how Amazon and every other predatory corporation will be resisted: by the power of the people coming together and imagining a better world in which we control the means of production and distribution, and render ghoulish companies obsolete.