The Drones Quilt Project is currently on tour across the USA. The exhibit consists of 3 to 5 quilts of 36 blocks, each measuring 66″ x 66″, four information panels measuring 20″ x 30″ each, and a resource/take action handout. We hope to have the exhibit travel the country, so if you are interested in hosting the exhibit in your town, please contact us. Check the website to see when the exhibit is coming to a town near you.

The idea for a Drones Quilt came from some women in the UK who started the project as a way to memorialize the victims of U.S. combat drones. We believed that there were lots of anti-drone activists in the U.S. who would like to make our own version of a Drones Quilt, and so the idea traveled across the Atlantic.

The idea is to collectively create a piece of artwork which connects the names of activists with those killed. The names humanize the victims and point out the connectivity between human beings.

Plans for the American version of the quilt include creating educational materials, photographs and information which together with the quilts will create an exhibit which will travel the country, informing and educating the American public.

Sadly, according to the Bureau of Investigative Journalism, only about 20% of the drone victims have been identified, so there are many, many victims whose names are not known. 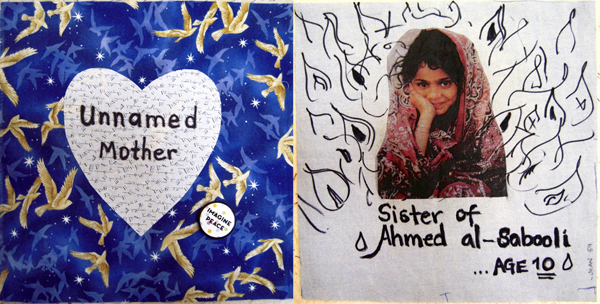 Additionally, Pashtun culture prohibits the release of an adult woman’s name, as they consider that an invasion of her privacy, so there are hundreds of women’s names which may never be known to us. We are remembering these unnamed victims with quilt blocks that say “Anonymous,” “Unnamed Woman,” “Unnamed Man,” or “Unnamed Child.”

The important thing to remember is that each victim was a human being, with hopes, dreams, plans, friends and family. We hope that the Drones Quilt Project will help us remember that we are all the same–we are not worth more, and they are not worth less. We all have value.

Please help me spread the word! Making the blocks can be a wonderful group project for children, young people and adults. And I want to remind you that you definitely don’t have to know how to quilt or sew to make a block. You can use fabric paint or markers, glue on decorations, and use your imagination and creativity to make your block.

Blocks should be 10″ x 10″ and made of cotton fabric or a cotton blend– something that won’t stretch. We encourage you to include your name as as well as the name of a victim on the block. PLEASE make sure to leave a margin around your artwork so that it is not obscured in the seam allowance when the blocks are sewn together. You may embroider, cross stitch, appliqué, quilt piece, draw, paint, or whatever you like.

Please contact me at leahbolger@comcast.net to receive the name of a drone victim for your block. Instructions for making the blocks can be found on the drones quilt project website.

In peace and solidarity,
Leah 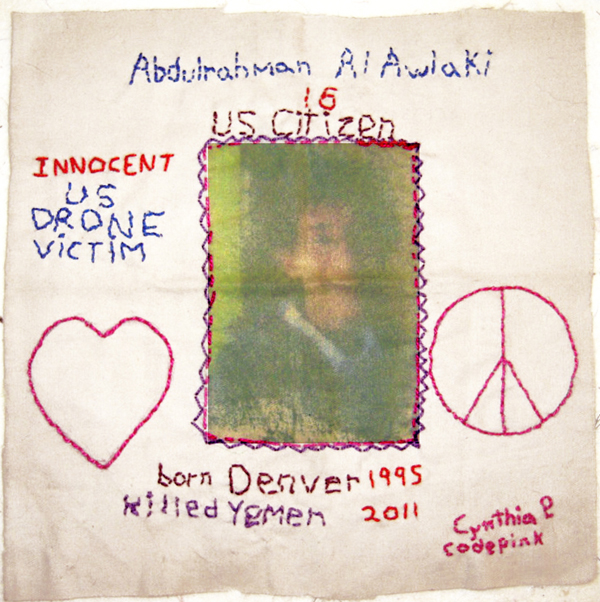 “While I was thinking about the design for my quilt block, and sewing it, I thought about the 16 year old boy, Zabihullah, who lost his life in a drone attack. I wondered about his life. What dreams did he have? Was he a scholar? Did he help support his family? What teenage things did he do for fun?

I wondered how I would have felt, if out of the sky, which brings the life-giving rain and sun, instead came an instrument of death. The children are the innocent victims. It is too easy for us to put the war out of our minds. The quilt will help us us to remember, to memorialize the victims, and then to rededicate ourselves to working for peace for all of the families over all of the world.” –Jeanne Raymond, Corvallis, Oregon

“I made this quilt block 6 months after visiting Pakistan to participate in a peace march protesting US drone strikes in their tribal areas along the Afghanistan frontier. This block symbolizes many things that I learned on that visit and how they relate to both this one boy and to the bigger international issue of drone strikes.

First, it commemorates the life of a four year old boy whose name we don’t even know. We only know him as the four year old son of his father. How sad that we can’t even name the dead.

Second, it sheds some essential light on the CIA covert drone war in Pakistan, if only by reporting the number of attacks.

Last and most personally, this quilt block declares my sorrow for the loss of this boy: my condolences to his mother, his family, his country, our world. When will we recognize that drone strikes are creating more militants than they are destroying? When will we accept that drones do not lead to the peaceful future that we wish for all citizens of the world? When will we invest more in peace (State Department) than in war (Defense Department)?” –Lorna VanderZanden, Arlington, VA