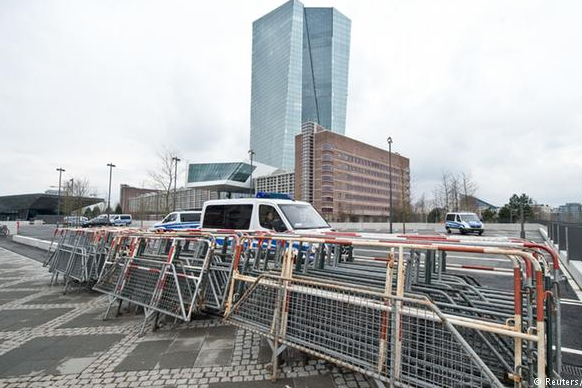 Rage Against The ECB: What’s Blockupy Against?

The Frankfurt-based European Central Bank (ECB) had scheduled Wednesday as a festive day to commemorate the official opening of the 185-meter (202-yard) tall skyscraper that will serve as its new headquarters building – a big glass tower that took five years and 1.3 billion euros ($1.4 billion) to build.

But the anti-capitalist Blockupy network has other plans. It’s gearing up for a day of protest and blockade, speeches and street theater. Blockupy’s goal: To draw attention to ECB policies which, they say, have favored the rich over the poor, the banks over the people, the creditor class over debtors – policies that have amounted to bailing out irresponsible financiers at the expense of ordinary citizens.

The ECB has reacted to Blockupy’s pre-announced day of protest by scaling back the opening festivities at the new headquarters. Now there will be just 20 guests taking part in a modest ceremony “appropriate” to a time of economic crisis, an ECB spokesperson said.

Blockupy isn’t some rag-tag little group of anarchists. It’s a leftist alliance composed of more than 90 organizations from across Europe – some big, some small – that have united in opposition to what Blockupy calls “the European crisis regime”.

Some of the bigger member organizations include the activist groups Attac, founded in 1998 to advocate a financial transaction tax; the German political party ‘Die Linke’ (The Left), which currently has a little over ten percent of the seats in the national parliament; and even Germany’s second biggest union union, Verdi, which has over two million members.

In November 2014, Blockupy protestors and police faced off in downtown Frankfurt near the ECB’s new headquarters building

The organization describes itself as a broad Europe-wide movement whose aim is to “build democracy and solidarity from the bottom up”. It’s against the economic policy stance of most current eurozone governments, which Blockupy describes as ‘austerity,’ or a push for balanced budgets at the expense of the poor and middle class.
A specific example of austerity policies Blockupy condemns is the harsh budget restraint imposed on Greece since 2010. Those policies were imposed by the three institutions that have funded the rolling-over of Greece’s accumulated national debt since the country nearly went bankrupt five years ago: the International Monetary Fund (IMF), European Commission, and ECB, which together are often referred to as ‘the Troika’.

How does Blockupy relate to Occupy?

Occupy Frankfurt is a member of the Blockupy alliance, and helped organize it. Occupy Frankfurt was inspired by Occupy Wall Street, which was formed in response to a call to “occupy Wall Street” on September 17, 2011, put out by the Canadian activist public relations group and magazine publisher Adbusters in the summer of that year.

Occupy Wall Street and – just weeks later – Occupy Frankfurt protesters responded by setting up tent camps in public parks as symbols of ‘occupation’. Both camps were shut down by police about a year later.

Occupy Frankfurt and allied anti-capitalist groups called for a blockade of Frankfurt’s banking district over Ascension weekend in April 2012. Several tens of thousands of people turned up for the demonstration. The demonstration’s organizers kept working together afterward, and recruited additional member organizations. The Blockupy alliance emerged from that.

What role does the ECB play in Greece’s on-going economic drama?

It plays a huge role. For one thing, the central bank funds Greece’s banks, which have borrowed billions from the ECB. The central bank has set a limit, for the time being, of 69.4 billion euros on the total loans available to Greece’s banks – loans they’ve needed because their skeptical depositors have been pulling money out on a very large scale.

Moreover, when it became apparent in 2010 that Greece would not be able to refinance sovereign debts coming due, the Troika bought large amounts of Greek sovereign bonds from the private banks and institutional investors holding them – thereby largely holding investors harmless, though it did impose a partial ‘haircut’ on some of Greece’s creditors in March 2012.

The Troika’s intervention effectively prevented Greece from having to declare bankruptcy. It also transferred the risk of Greek bond defaults or any additional ‘haircuts’ away from the owners and creditors of banks or investment funds, and onto European taxpayers.

Between the ECB’s support to Greece’s banks and its purchases of Greek sovereign bonds, the volume of total credit granted to Greece by the ECB is “currently at 68 percent of the country’s annual GDP, and with that, higher than anywhere else in Europe,” ECB president Mario Draghi recently said.

What were the consequences to Greek citizens?

Without the ECB’s loan support, Greece’s banks would have failed, and the government would have had to default on its debt servicing obligations. That would probably have led to Greece’s exit from the eurozone and a return to a separate national currency.

That’s something most Greeks oppose, because they prefer being paid in euros, a hard currency, rather than in a revived drachma, which everyone expects would rapidly drop in value and purchasing power.

In exchange for refinancing a substantial chunk of Greece’s debt, which currently stands at about 175 percent of GDP, the ECB – as one of the country’s three main creditor institutions – has had an important say over the list of structural reforms and budget cutbacks the Greek government has been required to agree to in exchange for the Troika’s refinancing support.

Those cutbacks were a factor in precipitating a subsequent wave of mass unemployment and a drop in Greece’s GDP of around 25 percent. They were not, however, the ultimate cause of Greece’s economic problems.

The main controversy isn’t over whether or not the ECB should have bailed out Greece’s creditors. It’s about whether the package of structural reforms and budget cutbacks imposed on Greece by the troika was well-designed.

In particular, there’s heated dispute about whether the Troika’s reforms will foster future growth or choke it off – and whether financial pain was imposed on the right segments of the Greek population. Syriza and Blockupy say the Troika package – which the Troika negotiated with past Greek governments beholden to old elites – crushed the poor and middle class and drove Greece into a self-reinforcing GDP deflation, whilst letting Greece’s oligarchs and wealthy tax-dodgers walk away unscathed.

Did the ECB’s support help Greece’s people or only the banks?

The ECB’s mandate is to ensure monetary stability in the eurozone. Had Greece’s government or its banks been allowed to default in 2010, the ensuing financial chaos might have destabilized the eurozone as a whole – with incalculable economic consequences to Greece and to the rest of the eurozone. It was primarily to limit those systemic risks that the Troika institutions stepped in to refinance Greece’s debt and to keep Greece’s banks afloat.