Rage Against The War Machine To Protest At White House Monday

Above photo: World Beyond War.

Remember the Gulf of Tonkin false flag incident in 1964 that led to The Gulf of Tonkin resolution on August 7, 1964?  Congress passed the Gulf of Tonkin Resolution, authorizing President Johnson to take any measures he believed were necessary to retaliate and to promote the maintenance of international peace and security in southeast Asia.

Millions of dead Vietnamese later and a generation of US military veterans that have killed themselves since then at a race that is over twice the number (around 58k) that were killed in country.

For its entire existence, but especially with the advent of the spreading cancer of US imperialism around the turn of the last century, the US military industrial complex has metastasized out of control and it seems incapable of leaving any country in peace, or unstained by its filthy military bases.

There is much evidence to believe that Iran DID NOT attack the Japanese tanker last week when Prime Minister Shinzo Abe was in a meeting with Supreme Leader Ayatollah Khamenei in Teheran.
On this past June 20th,  apparently Iran shot down a US Unmanned Aerial Vehicle (Drone) that it claims was in its airspace, and, of course, shills from the Pentagon are claiming that the military weapon /surveillance drone was in “international space.”

The empty suits from the Pentagon and their stenographers in the corporate media are using fake gravity to claim that it seems Iran is “provoking” the US to strike, when common sense and an understanding of history would make it seem quite the opposite.

Cindy Sheehan recently stated from her Vacaville home, “Along with crippling economic sanctions and belligerent statements from the US hegemon, any person with his/her head on correctly can see that the US/Israel is provoking Iran into a war that would be disastrous for all sides, but, most of all for the innocent people in Iran.”
The sovereign state of Iran has long been the “jewel in the crown” of neocon hopes and dreams and it seems with the addition of well-known Zionist neocons and architects of the Project for a New American Century to the Trump regime, the realization of that dream is tragically nearing. 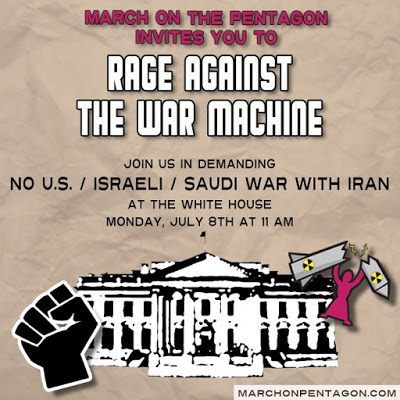 March on the Pentagon and Cindy Sheehan’s Soapbox is inviting everyone to join us in front of the White House on Monday, July 8th to demonstrate our opposition to any imperialist war, but particularly the increasing US/Israel/Saudi Arabia hostilities towards Iran.

We are meeting at 11 am on the Lafayette Park (Pennsylvania Avenue) side of the House of U.S. Horrors, bring your signs, bullhorns, noisemakers and outrage with you!

Cindy Sheehan and others are available for interview, or comment.