Montgomery County, VA — Early this morning, Duff Benjamin, a 75-year-old midwife, grandmother, and self-identified “raging granny” locked herself to Mountain Valley Pipeline construction equipment in Montgomery County, VA. Next to a banner reading “PIPELINES BLOW,” Duff shut down construction adjacent to Cove Hollow Road (nearby the ongoing tree sit blockade). She blocked work for 5 hours before being extracted, arrested, and charged with 5 misdemeanors. She has since been bailed out of jail. 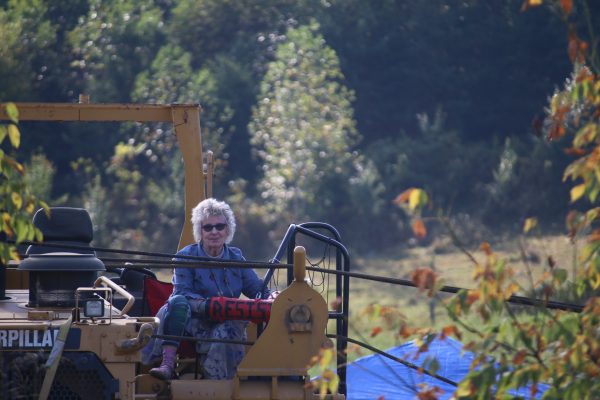 By Appalachians Against Pipelines.

Duff stated: “The problem with pipelines is they always leak. What they leak are toxins into the land, water, and air. The other problem with pipelines is that they frequently explode, and when they do, it’s the equivalent of a dirty bomb going off into poor, Black, and Latino neighborhoods — communities that pipelines are purposely routed through and near (never through wealthy white neighborhoods!). Because I see humankind as one huge family, and I am a member, I cannot sit back and watch this happen silently. I must voice my thoughts and feelings. I say, ‘NO! STOP IT!’” Duff considers herself a “raging granny,” in reference to a group of women old enough to be grandmothers who fight for social and environmental justice.

Duff’s action happened down the road from the dual tree sit blockade outside of Elliston, VA, that is currently protecting some of the last remaining trees in the pipeline’s path. The tree sits have been preventing construction of the Mountain Valley Pipeline for 388 days and counting.

Tree sitters and supporters on the ground stated the following in support of Duff: “Thank you, Duff, for stopping the pipeline on its path to the tree sits. Thank you for stepping up the climate strike from refusing to participate to actively preventing the destruction of the earth. We are so pleased to see that we are part of an intergenerational struggle, and that our elders are not leaving all of the challenges facing the planet to the youth. Let’s all rise up together to stop the MVP!”

Crystal Mello, a Montgomery County resident who herself took up residence in the nearby tree sits a few months ago, stated: “Any action to prevent any more destructive actions taken by this company is one hundred percent OK with me. This pipeline will be a ticking time bomb, especially in this spot that MVP had to abandon on December 4, 2019, and still has yet to attempt to dig. MVP is steadily ripping up earth and planting pipe elsewhere.”

This site at Cove Hollow Road has long been a point of contention for anti-pipeline activists. Crystal’s statement refers to December 4 of last year, when MVP halted construction at Cove for the winter because they had exposed several underground springs. Pipeline workers attempted to dig a trench to lay pipe, only to have the area repeatedly fill with water, turning the site into a muddy pond. Pipeline opponents held a press conference at the site after MVP “surrendered to the groundwater,” asserting that nature itself was fighting back against the pipeline. MVP claimed they would return in the spring when the area would be “less wet,” but they have yet to dig up that particular site again. In addition, this summer, pipeline fighters staged a protest nearby where over 30 people walked onto the pipeline work site and blocked construction. Today, Duff’s action escalates the ongoing resistance in this area.

The Mountain Valley Pipeline is a 42-inch diameter, 300-plus mile, fracked gas pipeline that runs from northern West Virginia to southern Virginia, with a proposed 70-mile extension into North Carolina. The Mountain Valley Pipeline contributes to climate change, increases demand for natural gas (and as a result, fracking), and is entrenched in corrupt political processes. It endangers water, ecosystems, and communities along its route. Last month, 1 person died and several others were injured after an explosion of a 30-inch natural gas pipeline owned by Enbridge in rural Kentucky. The Mountain Valley Pipeline poses similar threats to those along its route, in addition to the risks posed by the construction process itself. From flipped excavators, to sinkholes opening up, to landslides, MVP continues to risk the lives of protesters, residents along the route, and even its own workers.