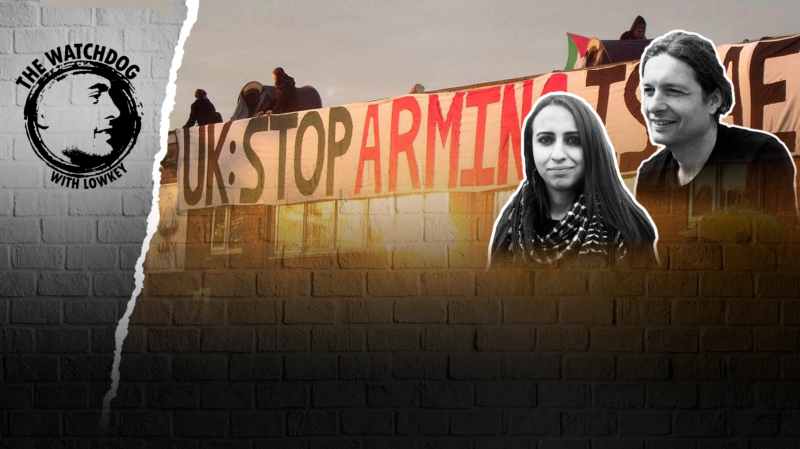 “We’re Not Breaking The Law; What We’re Doing Is Actually Rooted In Law; It Is A Lawful Act To Do Something To Prevent The Greater Crime — To Act To Save Lives.” — Huda Ammori, Palestine Action

Earlier this week, rapper Lowkey joined campaigners on the streets of Oldham as they protested at the Elbit Ferranti weapons factory located in the northern English town.

While the post-industrial town of 96,000 people might not seem like a likely flashpoint for the Israel-Palestine conflict, many of the weapons used against the civilian Palestinian population are actually manufactured there by the Israeli arms corporation.

Pro-Palestine activists in Oldham took part in the weekly protest at Israel’s Elbit Ferranti Arms Factory in solidarity with the Palestinian people.#ShutElbitDown pic.twitter.com/d8PCKiFIhB

In this interview, Lowkey speaks to the co-founders of Palestine Action, Huda Ammori and Richard Barnard, both of whom have been arrested for their anti-Apartheid activism. Ammori is a Palestinian-Iraqi whose father was chased from his home by Israeli soldiers in 1967. He was forced to flee to Iraq without even a pair of shoes.

The pair discussed what they were trying to achieve with their disruptive tactics and the legal basis for their actions. As Ammori told Lowkey:

People often think when we do these things that we are doing it to defy the law or breaking the law in the process. But we would always say that we’re not breaking the law; what we’re doing is actually rooted in law; it is a lawful act to do something to prevent the greater crime — to act to save lives.

In 2006, at the height of the Israeli invasion of Lebanon, nine activists in Northern Ireland forced their way into the offices of Raytheon, a major arms manufacturer. Once inside, they destroyed everything they could, from servers to computers to documents. At their trial two years later, they were found not guilty by a court, the decision spurring Raytheon to close down operations in the United Kingdom.

A similar protest was carried out in 2009 at the factory of Israeli weapons company EDO in Brighton in the south of England. The plant was a key site for the manufacturing of components for Israeli jets that were pounding Gaza at the time. Once again, the courts cleared the protesters of any serious wrongdoing.

Palestine Action hopes that their actions will have a similar effect, and ultimately force British manufacturing to divest from Israeli war crimes.

While much has been made about the unshakeable U.S. support for Israel, the United Kingdom has been receiving much less negative attention. The British military has designated Israel as a “strategic partner” and has sold the country over half a billion dollars worth of arms since 2015. U.K. forces also help train the Israeli Defense Forces (IDF), with a small number of British soldiers stationed inside the country as well.

After the Israeli bombardment of Gaza in the summer — an action that left more than 250 dead — then-Prime Minister Benjamin Netanyahu personally thanked his British counterpart Boris Johnson for his “unwavering” support for his state’s actions.

Here, Johnson’s government is at odds with the British public, only around 10% of whom, when polled, say their sympathies lie more with Israel than with Palestine. There is widespread anger at Israeli atrocities. Yet this has not been mobilized into much in the way of direct consequences. Palestine Action hopes to change this.