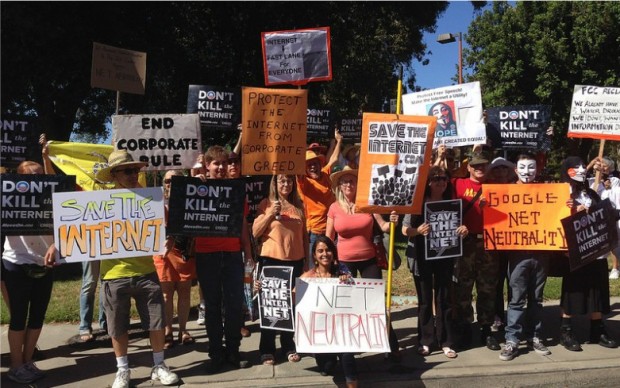 Rally With #TeamInternet On September 15

Rallies in New York, Philadelphia, Atlanta and Dallas — and beyond — to continue to send a message to the FCC that we need to save real Net Neutrality and stop the Comcast merger

Get ready to ditch your same-old lunch-hour routine on Sept. 15 — because on that day we need your help to fight FCC Chairman Tom Wheeler’s plan to allow discrimination online.

Sept. 15 is the deadline for final comments on Wheeler’s proposal — and while big broadband providers like Comcast are lobbying overtime to push this plan forward, we can’t let them have the last word. To that end we’ve organized big lunchtime rallies in New York City and Philadelphia to save Net Neutrality and fight the Comcast-Time Warner Cable merger.

Your voice is essential right now. If you don’t live in New York or Philly, you can organize a rally in your own community. It’s a pretty easy process and we’ve put together a handy toolkit with all the info you need to launch your own event.

All of us on #TeamInternet have made a ton of noise since Wheeler proposed his rules — sending record-breaking numbers of comments to the FCC, rallying in Washington, D.C., and California, meeting with our elected officials to push them to stand up for real Net Neutrality.

But we need to keep speaking out to win this one. We’ve got to keep the momentum moving until Wheeler faces facts and realizes that his proposal would kill the open Internet and please no one except mammoth companies like Comcast that want to squash their competition.

So grab your megaphone and get ready to rally on Sept. 15. Let’s make this national day of action one that Net Neutrality haters will never forget.