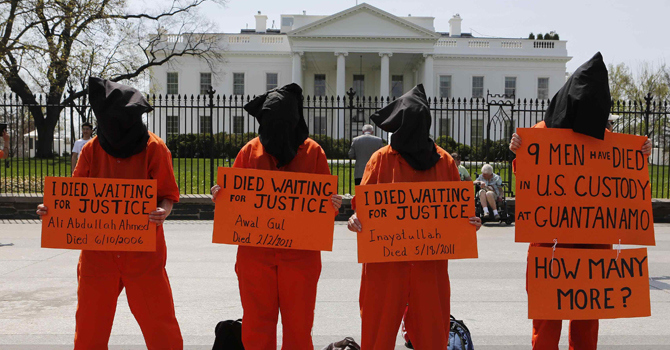 Islamic community leaders are calling on the Obama administration to rethink its policy of force-feeding hunger-striking detainees in Guantánamo during the month-long fast of Ramadan that begins on Monday.

The US government has said that barring “unforeseen emergency or operational issues” it will respect the daylight fast by trying only to force feed 45 detainees at night. Muslim groups say that by refusing to suspend the practice during Ramadan the US is adding insult to injury.

“We believe it’s wrong to force feed at any time but it is particularly upsetting to do it through Ramadan,” said Ibrahim Hooper, spokesman of the largest US Muslim civil rights and advocacy group, the Council On American-Islamic Relations (CAIR). He said the situation was Kafkaesque: “It’s not just a religious issue, it’s also a human rights issue in violation of international norms and medical ethics.”

Dr Azzam Tamimi, an Islamic community leader in Britain, said he hoped the Obama administration would reconsider. “As Ramadan starts, this issue is becoming increasingly embarrassing for the US government; it’s about time President Obama took a brave decision to end this in a way that would be appreciated around the Islamic world.”

The continuation of force-feeding through Ramadan is being legally challenged by four of the 106 detainees who are on hunger strike in protest at their prolonged detention without trial. A lawsuit filed with a federal court in Washington last week argues that night-time feeding could lead to long periods without water, endangering the hunger strikers.

To mark the beginning of Ramadan, the human rights group Reprieve has released to the Guardian a video in which the actor and rapper Yasiin Bey (aka Mos Def) submits himself to the enteral feeding imposed in Guantánamo. When the first tube was dislodged, he was unable to go ahead with a second attempt by the medical team to insert it.

The star said that he volunteered to be force-fed by two volunteer doctors to highlight what was happening to the hunger strikers in Guantánamo.

The four-minute video, directed by Bafta award-winning filmmaker Asif Kapadia, seeks to reconstruct the specific force-feeding instructions set out in standard operating guidelines from Guantánamo leaked to al-Jazeera. It shows a plastic tube being inserted through Bey’s nostril into his stomach. The “Medical Management Standard Operating Procedure” document leaked from the detention camp defines a hunger striker as a detainee who has missed at least nine consecutive meals or whose weight has fallen to less than 85% of his ideal body weight.

If force feeding is deemed medically necessary, medical personnel shackle the detainee “and a mask is placed over the detainee’s mouth to prevent spitting and biting”. A feeding tube is then passed through the detainee’s nostril into the stomach.

The process takes about 20 to 30 minutes but they can be required to stay in the restraint chair for up to two hours until a chest x-ray confirms the nutrient has reached their stomach.

The prisoner is then removed from restraint chair to “dry cell” where they are observed by a guard for up to an hour “for any indication of vomiting or attempts to induce vomiting”. If they do vomit, they are returned to the restraint chair for the entire duration of the observation period in subsequent feeds.

If they bite the tube, the guards hold their head still for “as long as necessary for the detainee to relax his jaw”.

Other religious groups have also spoken out against the practice. Last month Bishop Richard Pates, chair of the committee on international justice and peace for the US conference of Catholic bishops, wrote to the defence secretary Chuck Hagel noting the opposition of the International Committee of the Red Cross to force-feeding. “Rather than resorting to such measures, our nation should first do everything it can to address the conditions of despair that have led to this protest.”