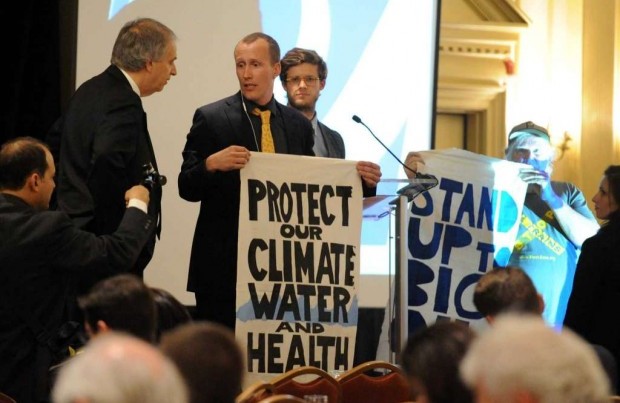 Amid shouts, FERC chairman driven from stage at Desmond conference

Climate protesters drove the head of federal energy policy from the stage Wednesday during a conference of power plant owners.

Near the end of a speech to the Independent Power Producers of New York, Federal Energy Regulatory Commission Chairman Norman Bay was interrupted and confronted by about a half-dozen protesters at the Desmond Hotel and Conference Center.

As the protesters shouted about the risks of man-made climate change and demanded that he answer, Bay tried to leave the podium, and appeared uncertain of where to go before IPPNY President Gavin Donohue quickly whisked him away through a side door.

Shouting broke out between protesters and conference attendees, with some of the former yelling “genocide” due to impacts of climate change. “Why are you signing the death warrant for so many people?” one protester demanded of Bay.

One audience member yelled, “What, now we are Nazis?” while others shouted at banner-holding protesters that the “circus is over” and to leave.

One protester was Igor Vamos, a media professor at Rensselaer Polytechnic Institute and a founder of the Yes Men, a media protest group that has staged fake press conferences to draw attention to social issues like climate change. The team has made several films.

Vamos and other protesters were members of Break Free Albany, an anti-fossil fuel group that plans to disrupt oil train traffic at the Port of Albany on Saturday, organizer Aly Johnson-Kurts said.

“The World Health Organization predicts there could be up to 100 million deaths worldwide from climate change by 2050,” she said. “Continuing to develop more fossil fuels is completely unacceptable.”

Johnson-Kurts said several hundred protesters will gather at the port Saturday to block the tracks, preventing trains from moving, until they are removed or arrested by authorities.

The group is also planning a kayak flotilla Friday evening on the Hudson River to draw attention to the issue of crude oil trains from the Midwest coming into the port.

On Wednesday, Vamos was carrying a microphone and video camera to record the event, and as he was leaving the room, a man who was attending the conference confronted him and tried to wrench the equipment from his hand.

State Police showed up and finished escorting Vamos and other protesters out of the hotel.

Afterward, Bay declined comment. His speech consisted of technical FERC issues on transmission and markets, and if Bay had any thoughts about several planned natural gas pipeline projects in New York to carry gas from Pennsylvania, he kept that to himself.

Last month, the state rejected key water quality permits for the Constitution natural gas pipeline project to carry gas from Pennsylvania to Schoharie County roughly near the Interstate 88 corridor. FERC had already approved the Constitution project and usually, state approval of such permits has been a routine matter.

Bay did not speak to the Constitution issue.

Donohue said protesters were “aggressive,” “disruptive,” and “out of line.” He said that FERC headquarters in Washington, D.C. had warned him that protests were possible.

“We were keeping an eye out, but we did not see anything before this … the protesters disguised themselves in suits and ties to blend in” before bursting unannounced into the conference room.

There was a meeting of police officials in another conference room and two State Police officers took the protesters out of the building. They quickly left the property.

FERC also faces lawsuits from gas pipeline opponents in New York and Pennsylvania who claim the agency is a rubber-stamp for pipeline projects.

This month, FERC moved to dismiss a lawsuit filed by the environmental group Delaware Riverkeeper Network, said network leader Maya van Rossum. That lawsuit claims the commission is biased toward industry, has staff and commissioners who routinely leave to get jobs in the energy industry, and had never rejected a pipeline proposal — which was the case until FERC rejected an Oregon proposal in March, shortly after the lawsuit was filed.

Delaware Riverkeeper seeks to invalidate a 1986 federal law under which FERC relies on fees collected from energy companies based on natural gas pipeline shipments. These payments account for 20 percent of total FERC revenue. The lawsuit seeks to have the 1986 FERC funding law declared unconstitutional because of its potential to make the agency biased in favor of pipeline project approvals. It also seeks to have declared unconstitutional two specific FERC powers — its authority to grant eminent domain rights to pipeline companies, which allows private property to be taken over the objection of landowners, and its authority to pre-empt local and state law.

Also pending against FERC is a lawsuit filed by Stop the Pipeline and other groups over the Constitution pipeline proposal.