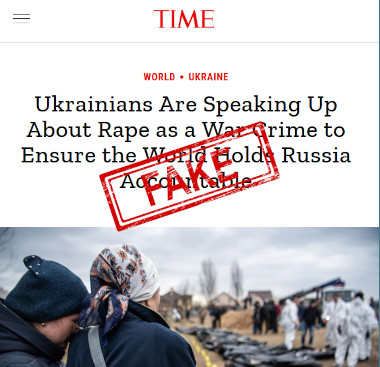 Rape Allegations Against Russian Troops In Ukraine Were Fake

There is a first and still very low noise signal that the Zelenski regime in Kiev is coming apart.

Six weeks ago there were suddenly many claims that Russian soldiers in Ukraine had raped people.

Time headlined: Ukrainians Who Have Been Raped by Russian Troops Are Refusing to Stay Silent

Ukraine’s human rights ombudsman, Lyudmyla Denisova said that 25 teenage girls were kept in a basement in Bucha and gang-raped; nine of them are now pregnant. Elderly women spoke on camera about being raped by Russian soldiers. The bodies of children were found naked with their hands tied behind their backs, their genitals mutilated. Those victims included both girls and boys, and Ukrainian men and boys have been sexually assaulted in other incidents. A group of Ukrainian women POWs had their heads shaved in Russian captivity, where they were also stripped naked and forced to squat.

“25 teenage girls were gang-raped; 9 are now pregnant. Elderly women spoke about being raped by Russian soldiers. The bodies of children were found naked with their hands tied behind their backs, their genitals mutilated.” A harrowing read, by @Amie_FR.

Such accusations of mass rape by the enemy de jour are made in every war (Libya, Syria) . They rarely turn out to be true.

It turns out that my hunch was right:

238 MPs voted her out. Other complaints were that Denisova had failed to organize humanitarian corridors and POW exchanges, and that she had spent time in “warm Western Europe” during the invasion “but not in Russia or Belarus, where her status and powers could help prisoners.”

Lyudmila Denisova had made lots of sensational claims about Russian soldiers:

Ukraine’s human-rights commissioner said on Tuesday that investigators had heard more than 400 allegations of sexual violence, including rape, of Ukrainians by Russian soldiers in the space of two weeks.

First, she said, the allegations generally involve young soldiers between 20 and 25 years old. “That is, those who just grew up on Putin’s rule, on his propaganda,” she said.

Second, the soldiers are typically accused of committing rape in public or in view of others, she said. She gave an example of a 25-year-old woman who said she was made to watch the rape of her 16-year-old sister and begged that they rape her instead.

“We need help for both,” said Denisova. She went on to describe the alleged rapes of two 11-year-olds, a girl and a boy, and a 14-year-old.

She said she had received a report that the 11-year old girl was raped after sneaking out to pick flowers in Hostomel, a city northwest of Kyiv that has been under heavy assault. She said the girl “remembers only the beginning, and then remembers nothing, only when she was knocked to the ground.”

Back then the rape allegations were part of the Ukrainian propaganda campaign:

Kuleba did not give any evidence for his claim. Reuters was unable to independently verify the claim.

However, a bunch of eager NGOs in Ukraine, hoping for fresh ‘western’ money for new ‘rape consultation and recovery’ projects, tried to find real rape cases. They were disappointed when they found that there was no evidence that any rape had taken place (machine translation):

On May 25, a number of media outlets and NGOs published an open appeal to Lyudmila Denisova calling for improved communication on sexual crimes during the war.

The signatories insist that Denisova should disclose only information about which there is sufficient evidence, avoid sensationalism and excessive detail in their reports, use correct terminology and take care of the confidentiality and safety of victims.

“Sexual crimes during the war are family tragedies, a difficult traumatic topic, not a topic for publications in the spirit of the ‘scandalous chronicle.’ We need to keep in mind the goal: to draw attention to the facts of crimes, “the appeal reads.

Other reason cited for firing Denisova were her extensive stays in west Europe during the war and her neglect of negotiations with Russia about prisoner exchanges and other humanitarian issues:

[Deputy Chairman of the Standing Committee the Verkhovna Rada Pavlo] Frolov also noted that since the beginning of the war and the great suffering of Ukrainians, Denisova has hardly exercised her authority to organize humanitarian corridors, protect and exchange prisoners, oppose the deportation of people and children from the occupied territories, and other human rights activities.

The incomprehensible concentration of the ombudsman’s media work on numerous details of “unnatural sexual crimes” and “rape of children” in the occupied territories, which could not be confirmed by evidence, only harmed Ukraine and distracted the world media from Ukraine’s real needs.

After February 24, the current Verkhovna Rada Commissioner for Human Rights spent abroad, but not in Russia or Belarus, where her status and powers could help prisoners, deportees and victims of the occupation of Kherson, and in Davos, Vienna, Warsaw and other warm Western Europe.

Denisova had become too embarrassing. Her firing seems to be part of a remake of the Ukraine propaganda campaign. Here is another data point from The London Times  that points into this direction:

The Azov Battalion has removed a neo-Nazi symbol from its insignia that has helped perpetuate Russian propaganda about Ukraine being in the grip of far-right nationalism.

At the unveiling of a new special forces unit in Kharkiv, patches handed to soldiers did not feature the wolfsangel, a medieval German symbol that was adopted by the Nazis and which has been used by the battalion since 2014.

This reminds one of al-Qaida in Syria which was relabeled to Jabhat al-Nusra before being named Jabhat Fatah al-Sham and ended up being called Hayat Tahrir al-Sham. Names and symbols changed. But all the time the leadership, ideology and behavior of the group stayed the same.

Rebranding of radical groups to make them more acceptable in ‘western’ media happens all the time. Here are two more Moon of Alabama headlines about similar product name changes:

Nothing of the above will change the cold fact that Ukraine and the ‘west’ are losing in their war against Russia.