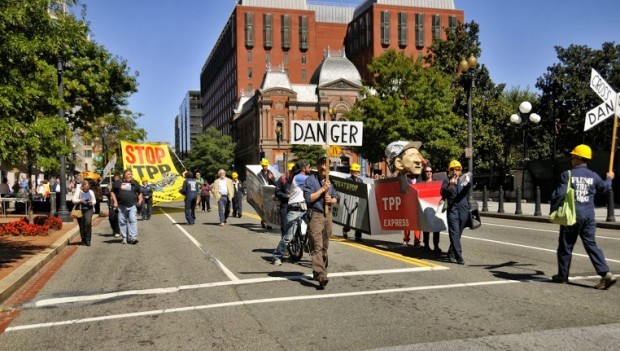 Rapid Response To Stop Fast Track And The TPP

We are continuing our focus on Senator Ron Wyden. We’ll return on March 3 to occupy his office every day!! Help us out by joining us in the office or calling Wyden and telling him to stop Fast Track. He’s starting to say that Fast Track legislation should not move quickly and that’s a start, but we need more. Tell Wyden to publicly oppose Fast Track and introduce a bill calling for release of the TPP text instead. His number is 202 224 5244.

We need to organize quickly. President Obama and the new Congress are moving to pass Fast Track legislation which will permit the President to sign secret trade agreements like the Trans-Pacific Partnership (TPP) before Congress sees them and restrict Congress from determining what impacts the TPP will have on our health, economy, communities and planet.

We know what previous trade agreements like NAFTA have done to outsource jobs and lower wages, block efforts to protect public health, expanded inequality and increase our deficit. The TPP is a whole new breed. We call it “NAFTA on steroids.” The reason the TPP has been negotiated in secret and is being pushed through Congress in this unconstitutional and undemocratic way is because it contains provisions that will give corporations even more power to determine our laws even down to the local level and remove our power to fight back.

We aren’t going to let that happen. We are working with our allies across the continent to stop Fast Track and the TPP.

We have stopped them every time they have tried to past Fast Track for the last two years and we can do it again, but we need your help.

Here’s the timeline: Congress is expected to introduce Fast Track legislation shortly after the President’s week recess. It must pass in the Senate Finance Committee and House Ways and Means Committee as well as votes in both the Senate and House. They can move quickly and we expect arm-twisting to get enough votes. We must be vigilant and persistent to stop Fast Track. It is a game-changer.

1.  Visit www.StopFastTrack.com to email and call your legislators. Spread the word to others. We need to swamp Congress with tens of thousands of calls and emails.

2. Bring back TPP Tuesdays. On Tuesdays, do something to raise awareness in your community about Fast Track and the TPP. Hold signs up with a few friends or hand out TPP Occucards in a highly trafficked area, organize a teach-in, write a letter to the editor. Join the #TPPMediaMarch twitter storms at 9 pm Eastern.

3. Week of actions at member of Congress’ local office during the March 6 to 15 recess. CLICK HERE TO SUBMIT/FIND ACTIONS. If your member of Congress is not publicly condemning Fast Track, then you can assume that they either support it or are moveable. Plan a creative action at their office to show them that their constituents oppose Fast Track. You can dress up as movers and “outsource” them (see first video below), hold a “Billionaires for Fast Track” rally, make your own Fast Track train and stop it (see second video below), hold a funeral for our jobs, planet, sovereignty…. Be creative! Post your actions on the FlushtheTPP action map and share photos and videos with us afterwards.

**And if you live in the Washington, DC area or can travel there, join our Fast Track Rapid Response Team to mobilize quickly for actions when needed. Contact StopFastTrack@FlushtheTPP.org**