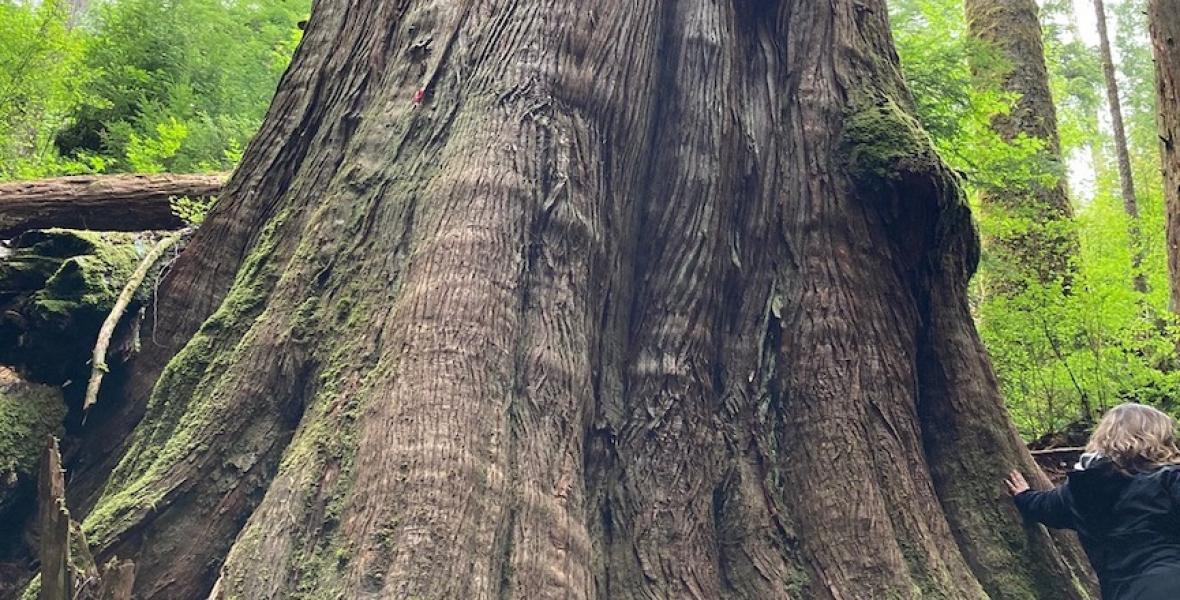 On Aug. 9, the one-year anniversary of the Fairy Creek protection efforts, the RCMP raided Fairy Creek’s headquarter camp. Twenty-five police vehicles, a helicopter and an emergency tactical unit were deployed against peaceful ancient forest protectors that day, and almost every day since.

What is the emergency that the police are responding to with such a massively expensive show of force?

Since the United Nations’ Intergovernmental Panel on Climate Change issued a code red warning on Aug. 9, is it the climate emergency that is so clear to us this summer with deadly heat waves and extreme forest fires?

No, the science tells us that RCMP are actually making this climate emergency worse by enforcing the clear cutting of some of the last remaining old-growth forests on the West Coast. These rainforests create rain and the cooling weather that we all urgently need; their destruction is ultimately our destruction, once we understand how humans rely on naturally functioning ecosystems for our health and well-being. Nature is the bottom line.

The emergency, then, is a human-made one, borne of a government privileging money and control above all else, disrespecting and destroying the beauty and biodiversity of life itself. The invasion of militarized forces in these peaceful forests is a power trip that is ultimately self-defeating, destroying the very basis we need for a livable climate. This is the emergency that B.C.’s provincial government is failing to respond to when it turns a blind eye to police violence, and misleadingly implies that enough old-growth deferrals have occurred.

I was supposed to be inside the HQ the morning of Aug. 9, but had spent the night in nearby Lake Cowichan because of a late meeting. So I was caught by surprise outside HQ and deeply worried for many of my friends inside, who know the space as a peaceful, loving community with a beautiful kitchen, an Indigenous healing garden in the process of being cultivated, and a spontaneous, creative crew of people who truly love the land.

Instead of being threatened by the police with arrest, I found myself forced to remain outside HQ at the newly named Roadside entrance, documenting police vehicles entering and exiting, and offering support to people who were forced out of HQ by the police. I also observed the installation of a new orange gate by a company named Arla Holdings and Domcor Security on Aug. 9, so that the RCMP could expand their illegal, arbitrary exclusion zones in service of Teal-Jones, against the public interest.

Over the course of the next few days, I saw families with small children leave, youth being picked up by their mothers, as well as people being driven out in RCMP vans. One can only guess how many millions were spent on police enforcement over the months since the injunction was granted by B.C.’s courts. (Almost $20 million has been spent policing Wet’suwet’en Territory, where Wet’suwet’en hereditary leaders oppose a natural gas pipeline through their traditional territory.)

On Saturday, Aug. 14, a couple of hundred people re-entered HQ in order to bear witness to the destructiveness of RCMP enforcement.

Although blockaders had been told they had 24 hours to collect their belongings and leave on Aug. 9, the RCMP’s Community-Industry Response Group officers and Emergency Response Team officers laid waste to much of the camp before people could pack their things. Those who re-entered saw that the RCMP had turned the kitchen into debris and made large piles of people’s lost things that they then spun as “garbage,” obscenely ignoring how they themselves had actually turned a vibrant, beautiful village into piles of rubble and stranded belongings.

The use of an injunction in the name of the “rule of law” ignores how the clear cutting of old-growth trees violates natural law and Indigenous law. It also ignores the real dangers we face due to rapidly destabilizing climate, with each distressing, record-breaking summer.

Even the courts have found that some of the RCMP blockades are unlawful for too broadly excluding media, legal observers and the public from rightfully spending time in the old-growth forests.

Visiting Fairy Creek, I saw both hope for the future, as people peacefully and lovingly converged for the sake of the ancient forests, as well as the systemic violence of police officers hiding their names and sporting thin-blue-line patches that they are not supposed to wear.

These RCMP officers are flouting the rule of law by wearing personal statements linked to white supremacy. The RCMP’s overly broad exclusion zones are an abuse of their colonial, institutional power.

To me, the RCMP’s show of force at Fairy Creek asserts white male privilege and the worship of money and property against all other values, against respect for life itself. They are so threatened by peaceful land defenders that they are sending three different police units from across B.C. and Canada to terrorize and coerce peaceful youths and Elders who want a livable future for everyone.

The emergency that is mobilizing such a wasteful show of police force is a crisis in colonial power, being threatened by a peaceful challenge to its values of white male supremacy and control at all costs.

And this is at all costs, make no mistake. We are in the midst of the most urgent and largest scale emergency that we all collectively face — even the RCMP, the judges and the poorly named Emergency Response Team in green uniforms stealing and destroying peaceful land defenders’ belongings.

They are in this emergency along with the little children, the folks who looked after HQ’s kitchen, the dogs in the camp, the beloved Pacheedaht Elder Bill Jones and more.

While the RCMP are clearly in denial about the climate emergency, they breathe the same smoky, polluted air that we do, and their children face the same terrifying future that we do, if the last ancient rainforests are rapidly eliminated in the next few years.

In order to meaningfully respond to the climate crisis, we could learn from U.S. President Joe Biden, of all people, who recently announced the protection of the United State’s largest forest, the Tongass National Forest.

We could also learn from Washington state, which is actively working towards proforestation instead of deforestation as a response to impending climate disaster.

On Monday, people organized actions at 18 different RCMP detachments across B.C. and Canada, as well as three locations in New Zealand, to say no to unlawful police violence against peaceful land defenders.

Hundreds of people spoke and sang at the Burnaby RCMP detachment on short notice, in a strong show of solidarity with Fairy Creek land defenders. As I said at that event, frontline Indigenous youth like Rainbow Eyes remind us that Indigenous people across Vancouver Island have been calling for the end of old-growth logging for many decades. This principle of respect for elder trees is wisdom that brings people together at Fairy Creek.

We are nearing almost 800 arrests now, yet people continue to stand strong for the old-growth forests. The depth and breadth of the movement around Fairy Creek is compelling and inspiring. In the face of police intimidation tactics, pepper spray and violent abuse of power, people continue to assert their love for the land, for one another, and for the future generations to whom we have a duty of care.