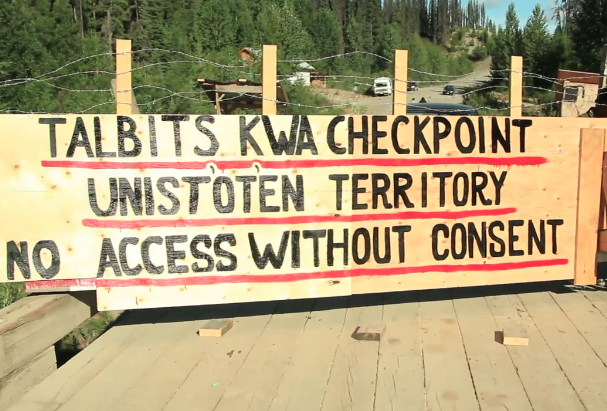 The RCMP are preparing to carry out a mass arrest operation against the indigenous Unist’ot’en Clan of the Wet’suwet’en Nation in northwestern BC under Harper government’s Bill C-51 labelling as terrorists First Nations activists exercising their Aboriginal Title and Rights to protect their lands from oil and gas development, according to a joint statement by the groups supporters.

The Conservatives’ controversial anti-terror act criminalizes protests that may be seen as interfering with ‘the economic or financial stability of Canada’ and opponents of the bill had long feared that it would be used to stifle opposition to oil pipelines aggressively promoted by Prime Minister Stephen Harper.

The RCMP have made a number of visits to the Unist’ot’en as well as other First Nations leadership regarding the Unist’ot’en camp, located on the shores of the Wedzin Kwah and mouth of the Gosnell Creek, tributaries to the Skeena, Bulkley, and Babine Rivers.

The activists have been protesting against the proposed Enbridge Pipeline and Pacific Trails Pipeline (Chevron), which are planned to cross the river at the exact points of our Pithouse, and Permaculture Garden that was built on the Unist´ot´en Territory of Talbits Kwah.

Today over fifty individuals and organizations have issued a letter to the provincial government, federal government and RCMP to express support for the Unist’ot’en Camp.

“The courageous stand taken by the Unist’ot’en and their supporters must not be criminalized by the RCMP nor targeted by government,” states Maude Barlow, National Chairperson of the Council of Canadians. “Through the draconian Bill C51, the federal government is attempting to brand people defending the land and water as ‘security threats.’ The Unist’ot’en are heroes, while the real threat is this government destroying the planet and economy.”

“Why is the Senior Command of the RCMP so hell bent on deliberately provoking a conflict between themselves and the Indigenous Peoples of British Columbia?” Grand Chief Stewart Phillip of the Union of BC Indian Chiefs asked. “Are they taking these instructions from Premier Christy Clark or Prime Minister Harper?”

Since 2009, the Unist’ot’en have maintained a camp by Wedzin Kwah (Morice River) that is blocking seven pipelines that do not have Unist’ot’en consent to use their land.