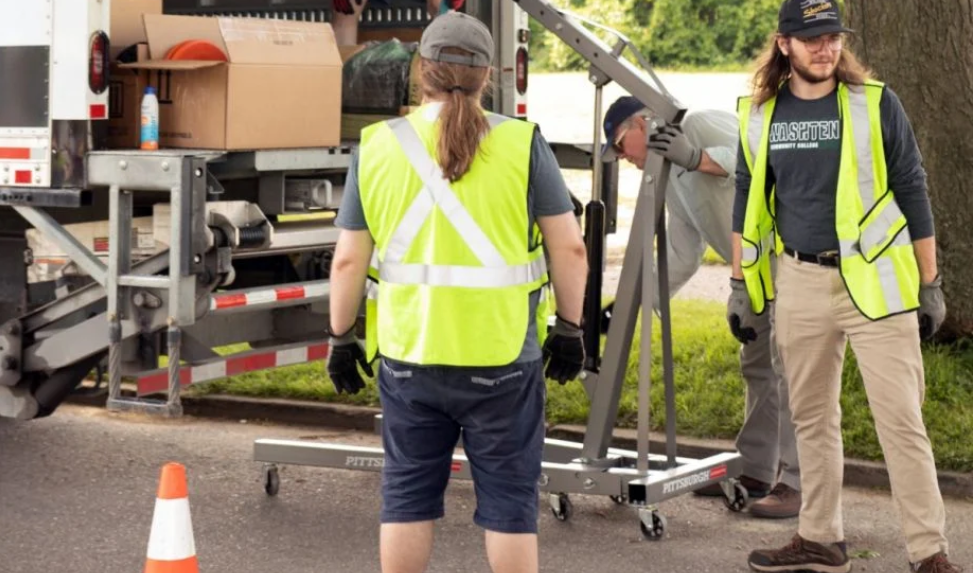 Re-Lighting The Night After The City Repossessed Their Streetlights

The City of Highland Park, a predominantly Black city surrounded by Detroit, Michigan, has had most of its residential streets in the dark for the last 10 years. In 2011, the city owed $4 million to utility company DTE Energy.

An agreement was made between DTE and city officials to remove roughly 1,200 streetlights to settle the debt. Reports suggest the repossessed lights were sold for scrap. Since then, Highland Park remained in the dark figuratively and literally. Residents had no clue what happened.

“And it was just really a sad day actually seeing the poles, the trucks came to take the poles out, and it just left these stumps,” says Shamayin Harris, a lifelong Highland Park resident. “So they’re basically all around our city right now. It just looks like a graveyard of cement stubs where lights used to be on the residential street. So right now they’re dark.”

But residents have figured out how to re-light the night: Since 2012 or so, Soulardarity, a community-led organization that advocates for energy democracy, has been installing solar-powered street lights that also provide community wi-fi.

The first 7 were installed in neighborhoods where residents agreed to have the lights replaced near their homes.

Each solar light costs $12,745 and takes about 6 months to manufacture. The cost includes installation, internet setup and everything but ongoing maintenance.

This June, 10 more street lights were installed on 10 blocks in Highland Park, bringing the total number of lights installed by Soulardarity to 17.

Jackson Koeppel is the former executive director of Soulardarity, and the organization’s co-founder. He says the solutions to the lighting problem have all been driven by groups of actual Highland Park residents, which is a contrast to how infrastructure decisions are usually made.

“We’ve always had a strong body of particularly elders, particularly Black women. … who have shown up to do the work of moving this organization forward,” Koeppel says.

Shamayin Harris, who’s also known locally as Mama Shu, is also the CEO and founder of Avalon Village, a sustainable eco-village being built in Highland Park. Mama Shu reached out to Koeppel and Soulardarity to begin a project to bring streetlights back to the neighborhoods. About five years ago the first solar light went up in Avalon Village.

“And right then [Mama Shu] was like, we’re gonna light up the whole village together, I don’t know when we’re gonna do it, but we’re gonna make it happen,” says Koeppel.

In 2018, DTE presented an integrated resource plan that would add $4.2 billion in electric infrastructure across southeast Michigan. The original projects presented to the public did not include solar energy upgrades.

Shimekia Nichols, the new executive director of Soulardarity, says the organization decided to call for the Michigan Public Service Commission to reject DTE’s plan because it did not include community solar, nor did it outline the process to improve community relationship building.

“We made some recommendations. And from that point, after gathering about 3,000 signatures [for] rejecting [the proposal]… we were able to at least start our relationship there,” says Nichols. “We’ve been able to take concerns directly to the Michigan Public Service Commission in a way we haven’t been able to before. Additionally, we’re able to have our own community input sessions.”

Nichols said community members of the group have been a part of every level of advocacy from canvassing to conducting needed research.

“I know that we’re not speaking for folks, we’re just helping them to be able to have access to speak for themselves. And it just ends up being just like a beautiful combination of, you know, folks that have a passion for doing this work.” says Nichols.

That includes people like Mama Shu. “It’s wonderful seeing the manifestation of it, you know, just come to fruition is just a beautiful thing. Something that we’ve worked on very hard and it actually happened.” says Mama Shu, who saw five solar-powered lights added to a block in Avalon Village.

Juan Shannon is the owner of Parker Village, an eco smart development centered around a community center in Highland Park.

Parker also worked to bring solar-lights to the area and the other 5 were placed in Parker Village.

“We’ve worked very hard with Soulidarity, and other partners for a long time to start bringing this vision to fruition. And you know, so one part of me was like, hey, great, you know, hard work paid off. There we go.” says Shannon. “And then after I actually drove home after the first night, then it kind of really hit me that we’re relighting this block, we’re redesigning this whole block. So if it feels great, it feels fantastic. It’s like a dream come true.”

Soulardarity’s next step is working to raise $10 million in order to replace the rest of the more than 1,000 repossessed streetlights.