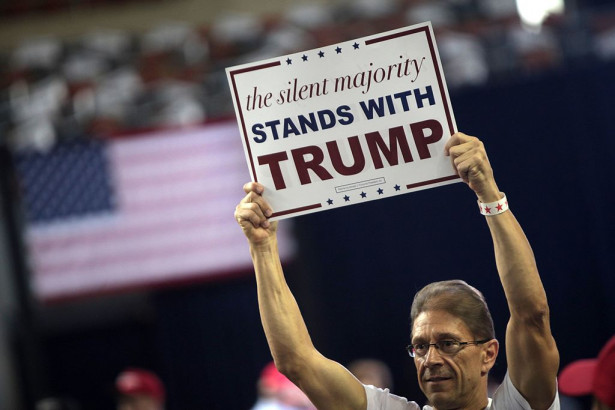 Reaching Trump Supporters With The Promise Of Vision

Above Photo: Supporter of Donald Trump at a rally at Veterans Memorial Coliseum at the Arizona State Fairgrounds in Phoenix, Arizona. (Wikimedia / Gage Skidmore)

If these were ordinary times, progressives might get away with casual images of our political opponents. Those who disagree “lack information,” or “remain prejudiced,” or are “gripped by an emotion like hate.” Reassured, we can return to informational outreach or protests or confrontations and hope that makes a difference.

These, however, are not ordinary times. I further expect more instability and turbulence to come in the United States, a situation that invites more strategizing. And having a good strategy requires more accurate images of the other players in the arena.

Arlie Russell Hochschild’s new book “Strangers in Their Own Land” has arrived just in time. Her writing gives us an in-depth picture of middle- and working-class members of the Tea Party, the foot soldiers of the Republican right. In particular, she reports on Southern Louisiana, chosen for its right-wing politics combined with the devastating impact of capitalism. Louisiana is at or near the bottom of the states in education, health and other measures of general well-being. Its people endure an environment highly degraded by the petrochemical industry.

Hochschild immerses herself in participation in social activities as well as home interviews. She doesn’t hide her teaching job at Berkeley and left politics, but by networking her way through trusted intermediaries and using her people skills she learns how locals see the world and themselves in it. A gifted writer, she invites us into that world, and surprises us with the diversity of their self-perceptions.

‘You have to take the bad with the good.’

Hochschild interviews people whose health, livelihood, and families have been hurt by irresponsible corporate behavior and the refusals to help by bought-off elected officials. Nevertheless, those same people defend capitalism and advocate for Republicans who oppose environmental and safety regulations. She finds four subgroups of Tea Party supporters, each subgroup having what Hochschild calls a “deep story” that makes meaning of their politics and distinguishes them from the people who have the same demographics but support liberal Democrats.

Just this chance to go beyond stereotypes we may have about Trump supporters is reason enough to read the book. (Class stereotypes are not really better than stereotypes based on race or sexuality.) In addition, I learned much that suggests how to strengthen our work.

Among the subgroups – Team Player, Worshipper, Cowboy, and Rebel – there is a recurrent bit of folk wisdom that I first heard from my dad: “You have to take the bad with the good.” If, for example, you believe that the only route to an abundance of jobs is to accept the downside of fracking, then it only makes sense in a job-hungry state to encourage the fracking industry to settle in Louisiana and to fight the threat posed by the federal environmental fanatics in the EPA.

The habitual left activist approach to disagreement, say about fracking, is to add more reasons against it. Hochschild helps us to understand why that approach is so often frustrating. She shows us how the “deep story” of each subgroup, reinforced by personal, lived experience, proves more compelling to its members than the pro’s and con’s of a particular issue. The piling up of reasons why fracking is bad is of very limited value. Hochschild’s description matches my own experience: Their frame of reference already allows for fracking’s down side. “We just need to take the bad with the good.”

In other words, right-wingers don’t really come to a new issue freshly, to judge “on the merits.” (Most of us don’t, either.) They start with a frame of reference that strongly pre-judges the outcome. Their starting point makes them distant from us on the “spectrum of allies,” a tool increasingly used for campaign strategizing.

In ordinary times, liberals might not care about the lower middle- and working-class part of the right wing. Why meet them on the level of frame of reference — of “big picture” — when Clintonian incrementalism has been working just fine? Hammer out compromises on particular points of policy, as was done with Obamacare, and over time we’ll see our country move ahead.

These, however, are not ordinary times, and even liberals might go beyond old habits and learn to play a bigger game. The bigger game means engaging with a larger part of America than before, including workers with Democratic roots who get written off as “misled.” It means meeting them not only by arguing single issues, but by going to their frame of reference itself.

What kind of big picture does the job?

The kind of big picture progressives love is analysis. We like to conceptualize the causes of, systemic faults with, structures of pollution, money in politics, war, poverty, misogyny, racism, class domination, etc. It’s clear, however — as Hochschild shows through political discussions and dialogues among Tea Party people — that they already have a big picture analysis that satisfies them.

What they lack, however, is a big picture vision. Their substitute is to look to the past, the good old days of community, mutual support, a sense of place and continuity. They feel angry and grieve, knowing the past is rapidly fading, but have no alternative vision to reach toward. Ayn Rand’s vision is not theirs, however popular it may be among rich right-wingers.

Hochschild hints at a possible vision for lower middle- and working-class people on the right. She points out that Norway has about the same population as Louisiana, and it is also an oil state. Without tying either place to oil in the long term, she uses Norway to illustrate a systematically different approach that affords Norwegians a healthy environment, more individual freedom than most people in Louisiana enjoy, and far more security and shared prosperity.

For Tea Party adherents who can easily bat away progressives’ arguments for this or that individual policy, an alternative vision that delivers more of their values than free market capitalism is a different discussion altogether. They see themselves as immensely practical — far more than “hippy idealists” found in enclaves such as Berkeley. What, then, to make of the practicality of a Norwegian system that has outperformed Louisiana (and the United States) on economic well-being for over 60 years?

And for job-hungry states, please note that — even before the oil began to flow — Norwegians maintained full employment. Hochschild found that her middle- and working-class Tea Party friends reverence work. Norway has a higher percentage of its population in the labor force than does the United States.

Norway is not a ‘welfare state’ — the misnomer that prevents dialogue

In the United States, there is a linguistic trap with terrible political consequences, and not only in Louisiana. Americans commonly believe that the Nordic “welfare states” have the U.S. welfare system on steroids. Administering such a system must be outrageously expensive. To pay for all those “free-loaders,” Nordic workers must be paying oppressively high taxes. The truth is very different.

These universal programs are paid for by taxes. A two-term Norwegian prime minister boasted to the New York Times that he was elected twice on the pledge not to cut taxes. Norwegians know that cutting taxes means cutting services everyone uses. They know (Americans do, too) that, to get quality goods and services, we need to pay a lot.

Arlie Hochschild shows in her book the enormous political damage that has been done by the United States’ choice to stick with welfare instead of going for universal services. A central grievance of hard-working Tea Party members is the belief that other people are getting a softer path through “welfare.” When interviewing in Scandinavia for my book “Viking Economics,” I was told over and over that the consensus for universal services that includes the populist rightist parties would disappear immediately if converted to the U.S. approach. Virtually everyone presently supports the system because it is applied to everyone. Furthermore, it is less expensive than market-based health care. The Nordic countries pay per capita one-half to two-thirds what the United States pays. Single-payer is more efficient — a plus for Tea Party people, as it is for the rest of us.

By comparing systems — the Nordics’ vs. that of the United States — a fresh dialogue can replace the shouted exchange of epithets that we have today. “Strangers in Their Own Land” suggests to me that the dialogue could reach farther into the political right than we saw in 2016 among those who were attracted to both Donald Trump and Bernie Sanders.

The challenge for progressives is to pay attention to the promise of vision.