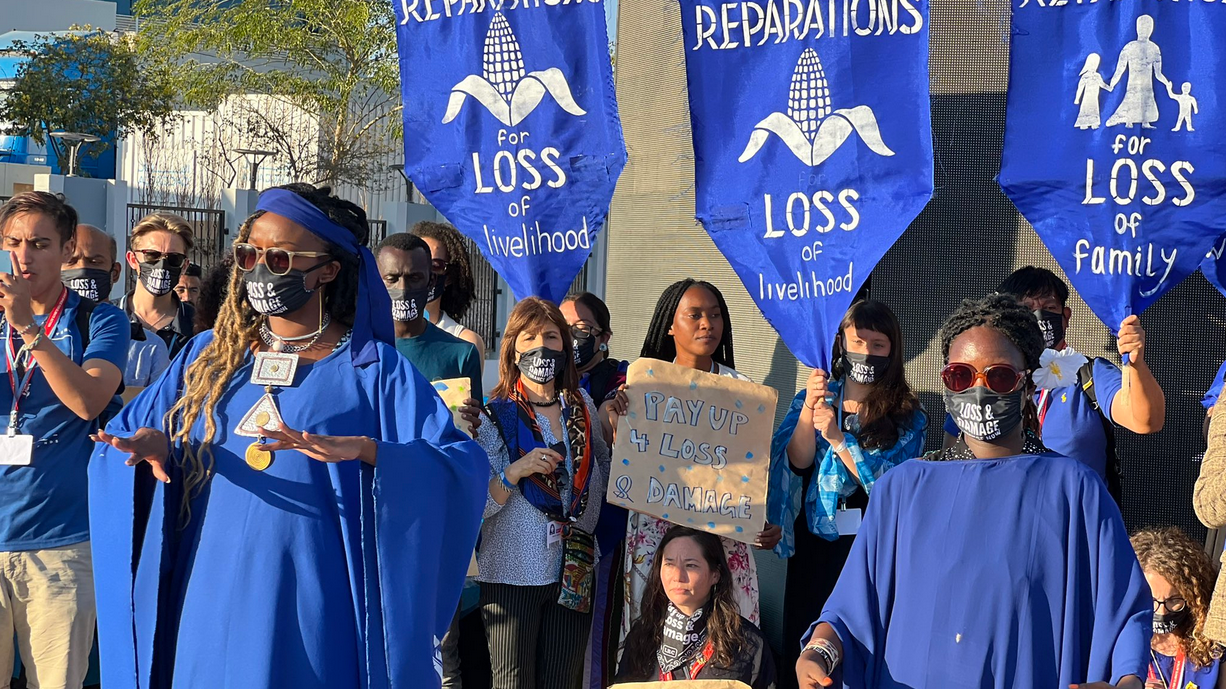 Real Challenge At COP27 Is Private Greed Versus Devastation Of All

In the hands of capital, ‘clean’ natural gas is worse than ‘dirty’ coal.

But rich nations have devised an elaborate system to conceal facts and shift blame to poorer nations.

The COP27 meet is underway at Sharm el-Sheikh. Although the Ukraine War and mid-term elections in the United States shifted our immediate focus away from the battle against global warming, it remains a central concern of our epoch. Reports indicate we are not only failing to meet climate change goals but falling short of the targets by a large margin. Worse, methane greenhouse gas emissions have grown far faster than we knew, and pose as much of a climate change threat as carbon dioxide. Methane lasts for a shorter time in the atmosphere, but seen over a 100-year period, it is a more potent greenhouse gas than carbon dioxide.

The result is we are almost certain to fail in our target to limit global temperature rise to 1.5 degrees centigrade. If we do not act soon, even a 2-degree target would be hard to achieve. At this rate, we are looking at a 2.5 to 3-degree temperature rise and the devastation of our civilization. The impact will be much worse in the equatorial and tropical regions, where most of the world’s poor live.

This column addresses two issues. One, the shift from coal to natural gas as a transition fuel, and the other is the challenge of storing electricity, without which we cannot shift to renewable energy.

The advanced countries—the United States and in the European Union—bet big on natural gas, or methane, as the transition fuel from coal. In the COP-26 meet at Glasgow, they made coal the key issue, moving the focus away from their greenhouse emissions to those of China and India as big coal users. The assumption behind using natural gas as a transition fuel is that its greenhouse impact is only half that of coal. Methane emissions also last in the atmosphere for a shorter time—about 12 years—before converting into carbon dioxide and water. The flip side is that it is a far more potent greenhouse gas. Its effects are 30 times higher over 100 years than an equivalent amount of carbon dioxide. So, even far smaller amounts of methane have a far more significant global warming impact than carbon dioxide.

The bad news on the methane front is also that methane leakages from natural gas infrastructure are much higher, possibly up to six times—according to a Stanford University Study*—*than the advanced countries have been telling us. The high methane leakage from natural gas extraction not only cancels any benefits of switching to natural gas as an intermediary fuel but even worsens global warming.

Two sets of data on methane are now available. One measures the actual leakage of methane from natural gas infrastructure with satellites and planes using infrared cameras. The technology to measure methane leaks from natural gas infrastructure is easy and cheap. After all, we can detect methane in exoplanets far from the solar system. Surely, saving this planet from heat death is a much higher priority? The other data is the World Meteorological Organization (WMO)’s measurements of atmospheric methane.

The Environment Protection Agency (EPA) in the United States estimates that 1.4% of all natural gas produced in that country leaks into the atmosphere. But a recent Stanford University study using cameras and small planes that flew over natural gas infrastructure found the figure is likely six times higher or about 9%! Even if methane leaks are only 2.5% of natural gas production, they will offset all the benefits of switching from coal to natural gas. “Clean” natural gas might be 3-4 times worse than even dirty coal. At least in the hands of capital!

The EPA does not take any physical measurements. All it uses to estimate methane emissions is a formula based on numerous subjective factors, and the number of wells, the length of the pipelines, etc. Let us not forget that many in the United States do not believe in global warming. They would like to take a crowbar to even a weakened EPA, dismantling all measures to reduce global warming.

The other set of figures that reveals the impact of methane leaks is the WMO reporting the biggest jump in “methane concentrations in 2021 since systematic measurements began nearly 40 years ago”. While the WMO remains discreetly silent on why this jump occurred, the relation between switching to natural gas and consequent rise of methane emissions is hard to miss.

The tragedy of methane leaks is they are easy to spot with today’s technology and not very expensive to fix. But capital has no incentive to take even baby steps that impact their current bottom line. The *larger good—*even bigger profits—but over a longer time frame does not interest capital. It has to be forced on capital by regulatory or direct state action.

The cynicism of the rich countries—the United States and the European Union—on global warming is visible in their conduct during the Ukraine war. The European Union has restarted some coal plants, increasing the share of coal in the energy mix. It has cynically argued that developing oil and gas infrastructure in Africa is alright, as long as it is solely to supply to Europe, not for use in Africa. African nations must use only clean, renewable energy! And, of course, such energy infrastructure must be in the hands of European companies!

The key to a transition to renewable energy—the only long-term solution to global warming—is to find a way to store energy. Renewables, unlike fossil fuels, cannot be used at will as the wind, sun, even water, provide a continuous flow of energy. We can store water in reservoirs, but we cannot store the wind or sun, unless we convert them into chemical energy stored in batteries. Or into hydrogen and stored in tanks, or natural storage in geological formations, underground or in salt caverns.

There is a lot of hype about batteries and electric cars. What is missing is the disclosure that batteries, using current technology, have a much lower energy density than oil or coal. The energy from oil or natural gas is 20-40 times the most efficient battery today. That is not such a major issue for an electric vehicle. It simply dictates how often we must charge its battery and how long charging will take. It will require developing charging infrastructure with a quick turnaround time. However, the much bigger problem is how to store energy at the grid level.

Grid-level storage means supplying the power grid with electricity from stored energy. Grid-level batteries are being suggested to achieve this goal. What its proponents neglect to inform us is they may supply power for short-term fluctuations—night and day, windy and non-windy days—but cannot meet the demand from long-term or seasonal fluctuations. This is why the question of the energy density of storage—how much energy a kilo of a lithium battery can hold compared with a kilo of oil, natural gas or coal—is so crucial. For the technology we currently have, the answer is 20-40 times less! It means we need to build mammoth infrastructure to store energy to meet seasonal fluctuations. The cost of such storage will be prohibitive and simply exhaust all our lithium (or any other battery material) supplies.

I will not address the energy cost—electric or fossil—of public or mass transport versus private and why we should switch to the former. I will raise the larger question of how to store renewable energy so we can run electricity infrastructure when wind or sun is not there.

Maybe new technology will solve this problem? Remember our dreams of nuclear energy that is not only clean but cheap enough that it will not need to be metered? Do we bet our civilizations future on such a possibility? If not, we have to consider existing solutions. They exist, but they are alternatives to batteries to address the grid-level problem arising from the intermittent nature of renewable energy. The alternatives are to repurpose existing hydro-projects to work as grid-level storage and developing hydrogen storage for fuel cells. It will need no extra dams or reservoirs (to answer the fears of the opponents of hydroelectricity projects). And, of course, it means more public transport instead of private transport.

All these existing solutions require changes on a societal scale that capital opposes. After all, they require public investment for social benefits and not private profits. Capital privileges short-term private profits over long-term social benefits. Remember how oil companies had the earliest research to show the impact of global warming due to carbon dioxide emissions? They not only hid these results for decades but launched a campaign denying that global warming is linked to greenhouse gases. And did they not fund climate change deniers?

The contradiction at the heart of global warming is private greed over social needs, and who funds the transition away from coal, the poor or the rich? This is what COP27 is all about, not simply how to stop global warming.