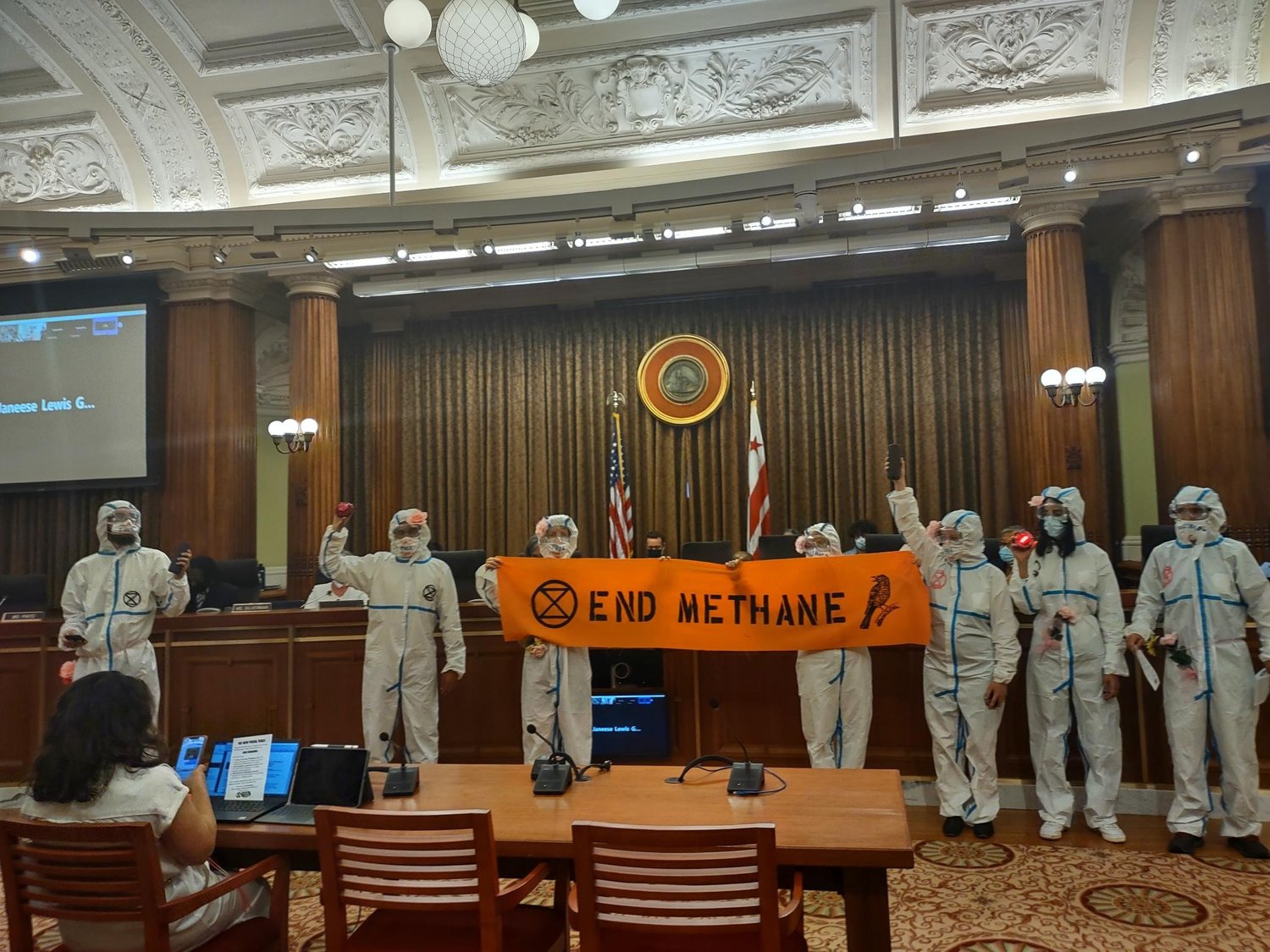 Washington DC – Rebels wearing hazmat suits and gas masks disrupted a legislative session of the city council today to demand the council stops the construction of new fossil fuel infrastructure in the city.

The DC council plans to let Washington Gas spend $4.5 billion on new methane gas pipes in the district. This would lock in decades of planet-heating emissions while poisoning and endangering DC residents. pic.twitter.com/8Xh7Za4PJ1

Washington Gas plans to spend $4.5 billion on new methane gas pipes in the district. This new fossil fuel infrastructure would lock in decades of planet-heating greenhouse gas emissions while continuing to poison and endanger DC residents.

“The council’s failure to act is pushing us further towards climate catastrophe. It is also exposing residents to deadly danger, severe illness and early death,” said Reilly Polka, a spokesperson for Extinction Rebellion DC (XRDC), the local chapter of the global climate movement.

“The council is ignoring our demands and the warnings of dozens of health experts, scientists, and energy advocates. We will continue to disrupt politics-as-usual until the council acts to protect the people it is supposed to serve.”

Methane gas, which is piped into people’s homes for cooking and heating, is a fossil fuel that heats the planet 20 times faster than carbon dioxide. Washington Gas’ death project will make the district’s climate goals impossible to achieve. Methane is also a toxic pollutant that causes early death and asthma, especially in children.

There are more than 6,000 methane leaks in the city, far higher than the national average. Around a dozen are so dangerous that they could explode at any minute. The health and safety risks of methane are concentrated in Black, Brown, Indigenous, and poor communities.

In April, XRDC launched a sustained campaign of nonviolent civil disobedience to end the city’s reliance on toxic methane gas. It has sent a letter to the council, delivered letters to councillors in person and disrupted political forums featuring candidates in upcoming local elections. On Earth Day one rebel climbed the Wilson Building and unfurled a giant banner that read “NO NEW FOSSIL FUELS.”