Reckless US Actions Fire Up The Antiwar Movement

The reckless and dangerous act of war committed by Donald Trump and the Pentagon in killing Major General Qasem Soleimani of Iran and the Iraqi leader of the Popular Mobilization Units (PMU), Abu Mahdi al-Muhandis, has brought the conflict in the Middle East (aka West Asia) to a new level. The conflagration of war is growing with the United States making this direct attack on a top Iranian official in violation of Iraqi sovereignty.

As expected, the corporate media and many politicians are spreading lies to justify the murders and further aggression towards Iran. It is important for us to understand the facts so we can respond to this misinformation and avoid being lied into yet another war.

Fortunately, there was a rapid response in the United States with actions in more than 82 cities in 38 states involving tens of thousands of people to protest more war on Iran. [See our message to Iran here.] It is imperative, and the ingredients are in place for it, that the antiwar movement grows exponentially very quickly and becomes a major force in 2020. The combination of opposition to never-ending, always-expanding wars, hatred of Donald Trump, the 2020 election year and pent up frustration over massive military spending can create a movement more dangerous to Trump than the toothless Democratic Party impeachment. 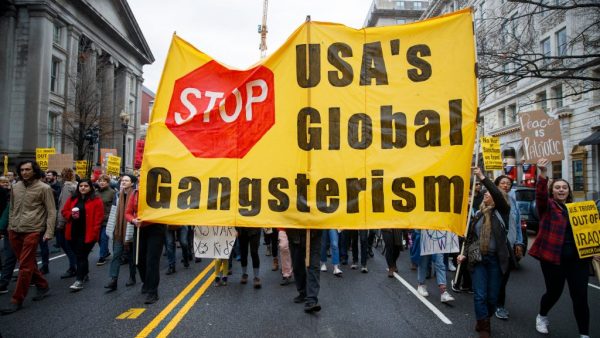 The Assassination of Soleimani was Based on Falsehoods

As expected, corporate media in the US is pushing lies to rationalize the crimes committed by the US. In reality, the justifications used by the US for the assassination were false. The primary claim used to justify the attack is that Soleimani was planning imminent attacks on US forces. In fact, Moon of Alabama reports that Soleimani was not planing any “imminent attacks” on the US or its interests in Iraq. In no way was Soleimani a legitimate target for a US attack.

Moon of Alabama writes, “The Quds force [which Soleimani led] is the external arm of the Iranian Islamic Revolutionary Guards Corps. Soleimani was responsible for all relations between Iran and political and militant movements outside of Iran…. He was the man responsible for, and successful in, defeating the Islamic State in Iraq and Syria. In 2015, Soleimani traveled to Moscow and convinced Russia to intervene in Syria. His support for the Houthi in Yemen enabled them to withstand the Saudi attackers.” In all these instances, Soleimani was standing up against US imperialism. These actions made him a target of the US military establishment and a hero in Iran and allied nations.

There have been vague claims that Soleimani killed a US contractor, but this is in doubt. As Scott Ritter writes: “There are several problems with this narrative, first and foremost being that the bases bombed were reportedly more than 500 kilometers removed from the military base where the civilian contractor had been killed. The Iraqi units housed at the bombed facilities, including Khaitab Hezbollah, were engaged, reportedly, in active combat operations against ISIS remnants operating in both Iraq and Syria. This calls into question whether they would be involved in an attack against an American target. In fact, given the recent resurgence of ISIS, it is entirely possible that ISIS was responsible for the attack on the U.S. base, creating a scenario where the U.S. served as the de facto air force for ISIS by striking Iraqi forces engaged in anti-ISIS combat operations.”

Following the alleged killing of this unnamed US contractor, the US military bombed members of Iraq’s Popular Mobilization Unit (PMU) killing dozens and wounding about 50 people. In response to this outrageous action – imagine a Chinese contractor being killed in the US and China responds by bombing our domestic military bases – Iraqis stormed the US Embassy in Baghdad. The assassination of Soleimani was apparently in response to the protests at the embassy.

Prior to these events, Iraqis had been protesting their government and were divided over the US and Iran’s involvement in the country. However, now the country is united against the United States and the Parliament voted to expel the US from the country. Before that vote, Prime Minister Adil Abdul-Mahdi told the Parliament he was scheduled to meet with Soleimani a day after his arrival to receive a letter from Iran in response to a de-escalation offer Saudi Arabia had made. The US assassinated Soleimani shortly after his arrival at the Baghdad civilian airport and before the letter could be delivered. 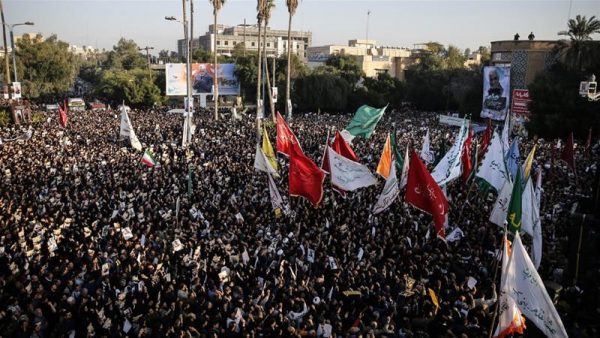 The United States has been waging a war of “maximum pressure” on Iran throughout the past year to no avail. Iran has been measured in its responses to the US withdrawal from the nuclear agreement, increased illegal unilateral coercive measures (aka sanctions), threats of attack and false accusations against Iran. This assassination is a new level of criminality and recklessness. General Soleimani was loved and revered in Iran and throughout the region. Since his murder, Iranians and Iraqis have poured into the streets to mourn him and al-Muhandis and to call for action.

Iran has promised, “forceful revenge” but Iran is not seeking a war with the US. Unlike the US’ action, which doesn’t seem to be thought through, Iran will be deliberate to achieve strategic objectives. While rapid escalation is possible, more likely is a long-term careful response by Iran. An asymmetrical response, which is the strategy put in place by Soleimani, is the most likely. Iran’s control of the Strait of Hormuz, where one-third of the world’s oil passes, could choke the world’s oil supply resulting in increased prices that risk a recession in the US and globally. Already, oil prices are rising.

Iran can act diplomatically to further isolate the United States. Scott Ritter writes, “The diplomatic missions Suleimani may have been undertaking at the time of his death centered on gaining regional support for pressuring the United States to withdraw from both Syria and Iraq. Of the two, Iraq was, and is, the highest priority, if for no other reason that there can be no sustained US military presence in Syria without the existence of a major US military presence in Iraq.” The 16,000 people working at the massive US embassy in Baghdad could also be forced out of Iraq. Muqtada al-Sadr has already said in a letter that Iraq should go further and shut down the US embassy. The State Department has ordered all US citizens to leave Iraq.

Brigadier General Hossein Dehghan, Iran’s former defense minister and current military adviser to Ayatollah Khamenei, says Iran is not seeking war with the United States and will only target military sites. There are also military targets in the region that could be attacked by Iranian allies including those of the US and its allies such as Israel.  General Gholamali Abuhamzeh, the commander of the Revolutionary Guards, said: “Some 35 US targets in the region, as well as Tel Aviv, are within our reach.”

An escalation of the situation could occur no matter what Iran does because of actions by the United States. Yesterday, President Trump was threatening to bomb 52 targets in Iran, including historic sites. Iranian Foreign Minister Javad Zarif wrote in response that “Targeting cultural sites is a WAR CRIME.” Zarif sent letters to both the UN Security Council and the UN to condemn the US’ actions.

The US announced it is sending 3,500 more troops from the 82nd Airborne Division to Iraq, adding to the 5,000 already there, at the same time that the Iraqi Parliament, Premier, and Prime Minister have called for the US to leave Iraq. The US will either leave voluntarily or it will remain as an illegal occupying force. And Iran just announced that it is leaving the nuclear agreement. Although Iran has not stated an intention of building nuclear weapons, leaving the agreement opens that door. 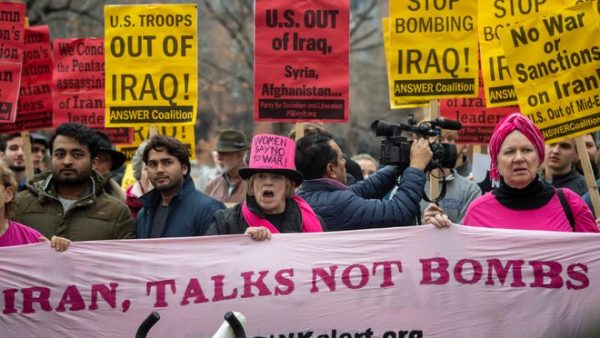 US Out of Iraq

Iran’s first goal of removing the US from Iraq, Syria and the Middle East was advanced on Sunday when the Iraqi Parliament voted to expel the US military from the country. Prime Minister Adel Abdul Mahdi described the murders as “a political assassination” and urged “for the sake of our national sovereignty” that Iraq establish a timetable for the exit of US troops.

Shia PMU groups have already declared they will do whatever they can to evict the US military from Iraqi soil. The US killed their leaders and comrades so they will take action independent of Iran. Moqtada al-Sadr, the Shia cleric who commands millions of followers in Iraq, has given orders to reactivate his military to force the US out. Millions of people in Iraq joined processions remembering Soleimani and al-Muhandis. These Iraqis will be ready to take action to force the US to leave if the US does not abide by the Iraqi government’s request.

An unfortunate outcome of the US’ actions is that not only have very effective leaders in the fight against ISIS been killed, but the Iraqi PMU is now diverting its efforts away from stopping ISIS to focus on US troops. This is one more reason why the US needs to leave Iraq, and ideally the whole Middle East. US foreign policy over the past decades has brought instability to the region and made the world more insecure. It’s time for people in the United States to increase our calls for the US to get out of Iraq and the whole Middle East. 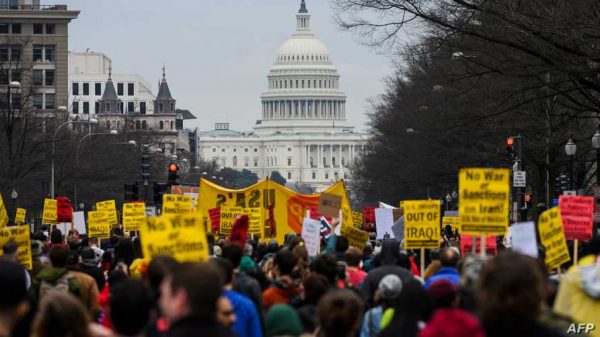 The mobilizations across the country yesterday were large and energetic. Many youth and new faces showed up. The messages were clear about opposition to more war on Iran and sanctions, demanding the US get out of the Middle East and calling out the bipartisan war machine. The root causes of capitalism and imperialism were also condemned. In 2020, we can build a people’s peace movement that cannot be ignored.

Congress returns to Washington, DC on Tuesday. We need to send a clear message upon their return that there must not be any more aggression on Iran and that the Authorization for the Use of Military Force must be repealed immediately. Click here to call Congress. You can also call the Capitol switchboard at 202-224-3121. We need to pressure all members of Congress and candidates to speak out against the war on Iran.

We will also need to continue educating ourselves and members of our communities to counter the lies being told in the media. All wars are based on lies and we must be able to recognize them when we hear them. Sharing articles on social media, writing letters to the editor and holding teach-ins and public forums in your communities can counter the corporate media claims.

And we will need to continue to protest in the streets. There will be more calls for days of action, but you can also organize your own. Find a highly-trafficked location such as a transit center or a public square and hold regular vigils to show your opposition. Hold a protest at your member of Congress’ office. If you are more ambitious, you can organize disruptive actions. Have a sit-in at your local weapons producer’s office, for example.

These reckless actions by the US military create dangerous and uncertain times, but it is also an opportunity to demand significant changes to US foreign policy. The US is losing imperial power and cannot continue to be a bully that violates international law. It is time to transform from domination to being a cooperative member of the world community. It is time to put in place a peace economy that creates economic security at home and abroad. The US is a young nation that has much to learn from more mature civilizations like Iran if we can only stop misbehaving long enough to listen.