Minneapolis, MN – Without waiting for permission, growers began planting vegetables and herbs in an empty lot on Lake Street and 17th Avenue. Their aim was to reclaim the dormant land on behalf of the community who lived nearby, in whatever way they saw fit to put it to use.

“We would like to see those places be used for something that benefits the community rather than just sitting and waiting for a developer to come in and build a condo.“

‘Lake Street Open Growth Space‘ was the name chosen for this squatted garden. A ‘squat‘ is a reclamation of neglected or unused privately-owned property to transform it into a public commons.

Although the gardens served as the initial semi-permanent infrastructure, there is also a plum tree (whose sibling is planted at George Floyd Square), a fire pit, and pop-up movie nights and grill-outs.

Unicorn Riot spoke with several volunteer organizers who agreed there is no overseeing body or group to coordinate what happens at the reclaimed space:

Two volunteers described the freeing, autonomous nature of the squat

Rather, the aim is to create a space “for people to come together and encounter each other.” Such free spaces where monetized consumption is not required were already scarce before the 2020 pandemic.

A volunteer pointed out that one function of the George Floyd uprising in Minneapolis has been to bring people into the same space, both geographically and emotionally.

“As much as some people were hurt to see their community burn down, I think it was also inspirational in the sense that some things need to come down in order for new things to grow.“

OGS’s first movie night was Spike Lee’s “Do The Right Thing,” selected by ‘Movies In The Garden‘ organizers “to honor both the sense of mourning of the uprising, and also the sense of joy, the sense of rebelliousness.” A movie is highly visible on busy Lake Street, and a movie night was thought to be an easy way to draw community members down to the space.

The land that Lake Street’s OGS occupies is said to be owned by Gorgui Dieng. Originally from Senegal, Dieng has been in the NBA since 2013, playing for the Minnesota Timberwolves for his first six years. He currently plays for the Memphis Grizzlies in Tennessee.

Accumulating tens of millions of dollars in his career, Dieng has created the Gorgui Dieng Foundation and has been involved in charitable aid ventures and initiatives in Senegal and helped to back the Basketball Africa League.

Dieng and In Gauge Engineering and Technology have teamed up on plans to erect the Dakar Building (plan .pdf) a mixed-use building on 17th and Lake Street.

On September 7, OGS volunteers put out an alert that In Gauge developers had destroyed some of the community garden. One volunteer noted the planned apartment complex didn’t seem to be priced for the incomes of anyone who already lived in that neighborhood.

“They claim it will be ‘affordable’, but Minneapolis defines affordable as $1,086 for a studio, meaning these apartments will be well out of reach for most in this neighborhood.”

Minneapolis is the third-most expensive city in North America, according to a 2019 worldwide survey.

In an interview with Unicorn Riot, OGS volunteer Matthew said that our society is “immersed in this idea of growth,” particularly obvious in the way the production of healthful food for workers was de-emphasized for the sake of producing cheap food that benefits sellers.

Matthew asserted that if people had been paying better attention, the United States and other expansion-based countries might not have been able to take advantage of countries in Latin America and Africa.

“If we could make the course correction, we can avoid a lot of pain as we transition to a better way of life.”

He added that what happened to George Floyd “has been happening for hundreds of years.” Though it was, in a way, fortunate that the video evidence of Floyd’s killing existed for people who had never seen anything like it, he lamented that some people hadn’t been paying attention until this extremely publicized recent killing.

As of the third week in September, chain link fences had appeared, enclosing the formerly open space with “No Trespassing” signs threatening police arrest, jail time, and a significant fine. 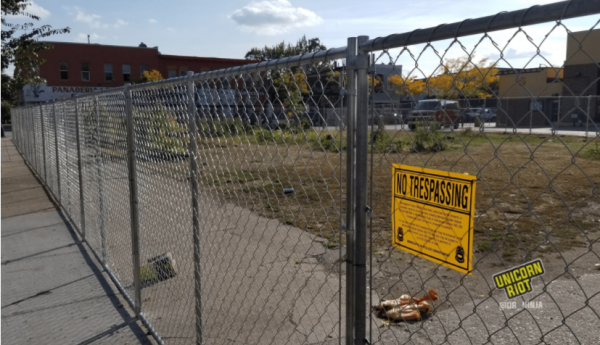 Fruits and vegetables growing in raised-bed gardens and stacks of upcycled car tires had previously made free food available at any time to anyone who came up to the space.

The garden space is still visible through the links, but the barrier of private land ownership now includes a physical barrier preventing community members from caring for the communal gardens and from making use of the space.

At the grill-out on Thursday, September 10, OGS volunteer, Gloria, said that everyone knew going into the project that the gardens wouldn’t be permanent. Minnesota’s winter season is on its way, and aside from that growers are used to planning ahead years in advance for a garden space. It has been a healthy challenge for some to participate in a project whose nature was more fleeting.

Now that a barrier has been installed on the border between the public and the previously-opened privately-owned land, the future of the OGS squatted garden—which will need to be harvested before the first frost, if its fruits are not to go to waste—remains to be seen.