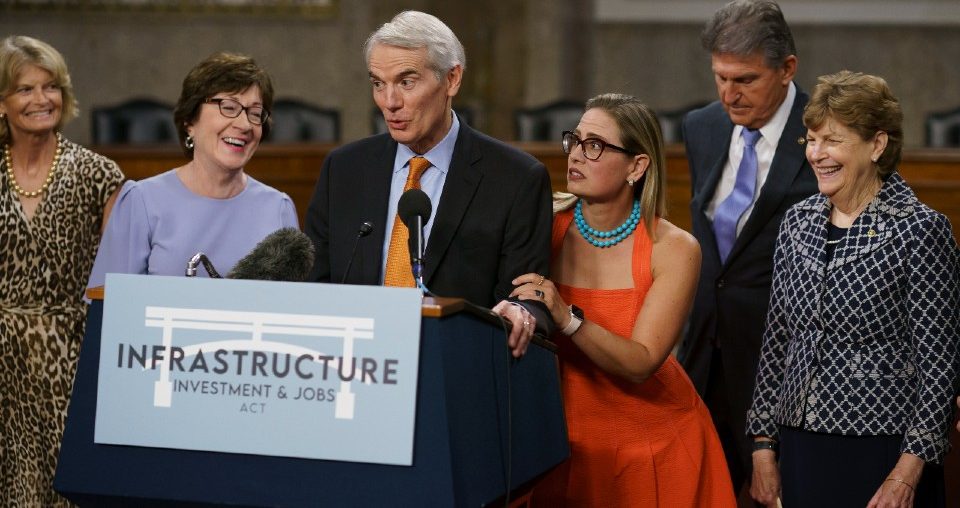 Reconciling The Reconciliation Bill: A Preview

This past week maneuvers within the Democratic party intensified over the content and magnitude of the two pending fiscal stimulus bills–the Infrastructure Bill (with $550B of net new spending) and the Reconciliation Bill ( with initial $3.5T ‘human infrastructure & climate change’ spending). While the maneuvering appears as a deep difference of views between progressives in the US House and Senate demanding both bills pass simultaneously and Democrat Senators, Manchin and Senema in that body blocking both bills in current form, the actual conflict is really between the corporate wing of the Democratic party (in both the Senate and House) vs. the wing that sees passage of both bills in current form as necessary to ensure a sustained economic recovery in 2022–and thus the Democrats retaining majorities in the House and Senate in the November 2022 midterm elections.

Manchin-Sinema in the Senate and Cuellar and his ten associates in the House are really the point persons for the corporate wing.  The differences and split within the Democratic party are not about individual Senators or Representatives; it’s about the corporate forces that dominate and control the majority of that party (as they have since 1990) and those same corporate interests intent on ensuring the two spending bills are not so large that taxes will have to be significantly raised in order to pay for them. More specifically, ensuring that the Trump $4.5T tax cuts of 2017 are not rolled back.

Those corporate interests in the Democratic party have already prevailed in rolling back the Infrastructure bill to a level of only $550B in new spending (from its original $2.3T) to ensure paying for the $550B is not done by raising any taxes on corporations, investors and wealthiest Americans. They already succeeded. Now the same fight is underway to prevent the Reconciliation bill requiring tax hikes on the same capital incomes. To ensure no tax hikes for that bill, spending will have to be significantly cut or delayed, or perhaps both.

In other words, the split in the party and fight is not just over stimulus spending; it’s over taxes and rolling back the Trump tax cuts. The corporate wing of the Democratic Party is as opposed to the tax hikes as are the Republican party and McConnell. To borrow a phrase from the 1990s: “it’s the tax cuts, stupid!”.

The next step in the corporate wing’s anti-tax hike offensive will occur in the US House early next week. Pelosi had promised weeks ago not to break out the two bills for separate votes, but vote on both at the same time. That was the promise made to the party’s progressive forces months back, in order to get Sanders and progressives in the Senate and the progressive caucus in the House to go along and remove trillions of dollars in spending on human infrastructure measures from the original Infrastructure bill and reduce that bill from $2.3T to only $550B in new spending on traditional infrastructure only.

The progressive caucus in the House and the Sanders-Warren faction in the Senate are demanding, however, that Pelosi honor her earlier pledge to vote on both bills at the same time. But will she? If she reneges on that promise and the House votes up both bills, the corporate wing in the Senate–represented by Manchin-Sinema–will never vote for budget reconciliation (50 + 1 vote) to pass either of the two bills. The Senate likely will then vote on the Infrastructure bill and let the $3.5T Reconciliation bill die. That will put Pelosi and the House progressives behind the eight ball, as they say: refuse to vote for the Senate passed Infrastructure bill or take the heat in elections for refusing to pass anything. One can guess what the pragmatists will then do, including Pelosi.

So what are the possible scenarios in the House this coming week?

One will be for Pelosi to vote on both bills as promised. While possible, it is the least likely to happen, however.

A second is to reduce the $3.5T spending total dramatically. The progressive caucus won’t go along with that, however.

How then to ‘reconcile the reconciliation bill’?

A more likely compromise outcome may be to backload most of the $3.5T (or a reduced amount). That is, make the Reconciliation bill spending take effect over a ten or even fifteen year period, with most of the spending occurring five to ten years into the 10-15 year bill. So maybe spend $1.5T over the first five to 7 years (Manchin’s signal he might accept) and the rest not taking effect until 2027 or after. In turn, make the proposed tax hikes to pay for it to take effect in the latter years as well.

That way Pelosi can placate the progressive caucus and the Democrats can still say they passed a big ‘human infrastructure’ Reconciliation bill.  Backloading might then satisfy Manchin, Cuellar, Sinema, and the party’s corporate wing. They can say they ‘won’, since the spending and taxing is only on paper. Republicans and McConnell will later cut the backload spending and delete the tax hikes once they take over again. That scenario could satisfy the Democrats’ corporate wing.

Another scenario may be for Pelosi not to hold a simultaneous dual vote because her progressive caucus won’t support a breaking out of the votes and will vote against the Infrastructure bill if held separate. In this case, Pelosi and the Democrats will then revert to the tried and true Democrat party ‘fall back’ message saying they’ll return to the vote on both bills after the 2022 midterms. That means everyone should vote for more Democrats in 2022 in order to pass both bills in 2023. But that’s a high risk strategy, since it will clearly appear that Biden and the Democrats can’t deliver on their election promises–especially if the US economic recovery is not robust by fall of 2022 due to lack of fiscal stimulus in fall of 2021, which is very likely since the current summer 2021 rebound of the economy already appears to be slowing.

So summing up: the three scenarios in the House are: Pelosi votes both bills up same time and they both pass; Pelosi renegs and holds separate votes and progressives vote down both bills; Pelosi and progressives agree on a ‘smoke & mirrors’ compromise and backload most of Reconciliation bill spending and taxing.

The first scenario almost ensures Manchin-Sinema will never compromise and vote for Senate budget reconciliation on either bills. The second means Biden and Democrats are ‘toast’ in 2022 midterms. Something like the third may therefore be the most likely outcome.

Whatever the scenario, it was already decided by party leaders last week when Biden called Schumer and Pelosi into his office, reportedly in a closed door meeting that no one else attended.  Biden thereafter called in separately a group of progressives and then a group of ‘moderates’ (i.e. what the mainstream media calls the corporate wing). Reportedly both Schumer and Pelosi came out of the meeting smiling and upbeat. What did they agree to with Biden? Not even Democrat members in the House or Senate know, since Pelosi-Schumer aren’t even telling them.

It all should become clearer this coming week. But one thing is certain: the final $3.5T Reconciliation bill with its spending on human infrastructure and climate change will be either significantly reduced or backloaded into out years so that the spending & tax measures can be safely deleted.

The Democrat corporate wing is as adamantly opposed to the spending–and the tax hikes it would require–as are McConnell and his Republicans. Thousands of corporate lobbyists have invaded Washington D.C.  in recent months, with the single purpose of demanding the Democrats don’t touch the Trump tax cuts.  They have already convinced both Republicans and the Democrat’s corporate wing not to raise their taxes. So watch for ‘smoke & mirrors’ financing in a final, much reduced spending Reconciliation bill–just as the same was previously engineered with the Infrastructure bill.