Red Cross Of Colombia: US Action To Venezuela Is Not ‘Humanitarian Aid’

Millions of Venezuelans Sign Petition Against US Intervention. Military Not Giving In To US Bribery & Threats. Guaido Under Investigation For Taking Money From Foreign Sources.

Note: The Grayzone Project is in Venezuela reporting on what is happening, an example of news we do not get in the US media. People lined up for blocks to sign a declaration against US imperialism and in support of President Maduro. The government reports 2 million people have already signed the petitions out of a population of 30 million Venezuelans.

Telesur reports 10 million are likely to sign the call against US intervention. Those signing must write down their name, their identity card, their telephone and their signature. They aren’t paid anything, nor do they get any benefits for signing and volunteers who help manage the lines aren’t given any gifts or even recognition.

Video: Venezuelans waiting in long lines to sign an open letter to the American people speak to @anyaparampil, asserting their country’s independence and denouncing the US coup attempt

I’m at Simon de Bolívar square in Caracas where Venezuelans are lining up for blocks to sign a declaration denouncing US intervention and imperialism. One man waiting just told me: “Please put in your picture that we’re not invisible and not being paid.” #HandsOffVenezuela pic.twitter.com/zEDyoWkPfq 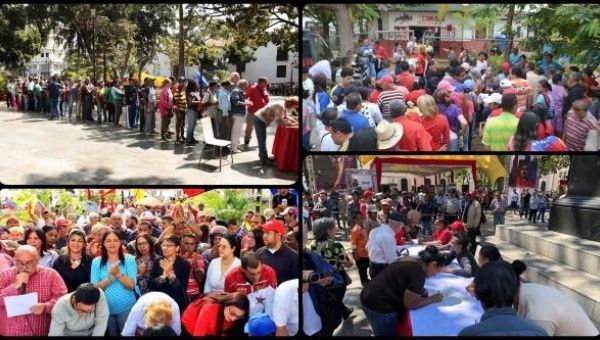 Venezuelans lining up to sign petitions against US intervention February 11, 2019. From Telesur.

El Pais is reporting that the coup president, Guaido, is being investigated for taking money from foreign sources, which is illegal under the Venezuelan Constitution.  Guaido has called for protests to demand the so-called humanitarian aid.

The US continues to “bribe, blackmail and pressure” Venezuelan military officials to side with the coup. So far, they have not had much success.

While the US is trying to bribe Venezuelan military officers to betray their country, it’s important to stress there have been very few defections. Corporate media highlighted the case of 1 (corrupt) general, but he is 1 of 2000!

The military still stands with the legitimate gov pic.twitter.com/jV7Y44oVCC

The head of the delegation of the International Committee of the Red Cross (ICRC) in Colombia, Christoph Harnisch, said that the institution would not participate in the distribution of any assistance that arrives in Venezuela from the United States since it considers that it is not “humanitarian” as the Trump government claims.

The head of the delegation of the International Committee of the Red Cross (ICRC) in Colombia, Christoph Harnisch, said the institution will not participate in the distribution of any assistance  to Venezuela from the United States, because it considers that it is not a “humanitarian aid” as claimed by the government of Donald Trump.

“We did not partake of it is not for us humanitarian aid,” he said. He added that the Commission considers that the action announced by the US government does not meet the criteria of being independent, impartial and neutral.

Translation of Tweet: The head of the Red Cross in Colombia, Christoph Harnisch, affirmed that this institution will not participate in the distribution of the assistance that will arrive from the United States to #Venezuela: “We do not participate in what is NOT for us a HUMANITARIAN HELP”

“Help,” which consists of a corridor for the passage of food and medicine – but eventually weapons – can be a pretext for a military attack on Venezuela and on Monday the 11th was joined by the Brazilian government. The team of President Jair Bolsonaro recognized the representative of the self-proclaimed interim government of Venezuela, María Teresa Belandria as the official ambassador for the country.

As the government of Nicolas Maduro must refuse the proposal, the US and its satellites could accuse him of acting against the population itself, paving the way for a military attack.