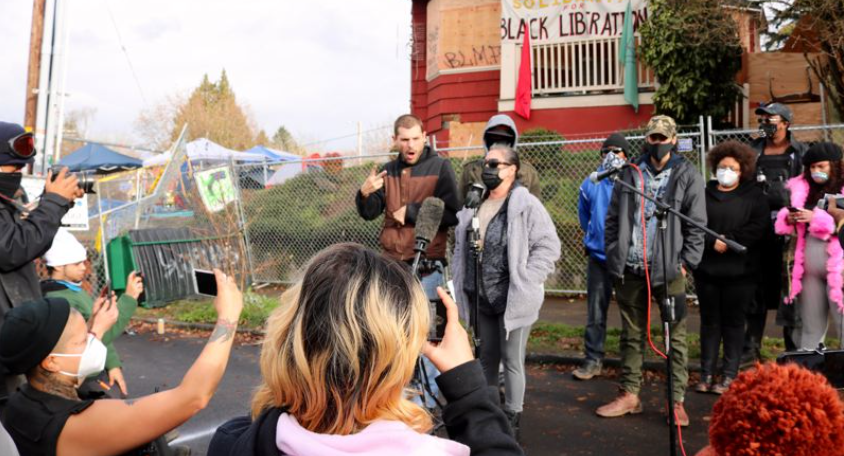 Above photo: Julie Metcalf Kinny, center, speaks at a press conference in North Portland at the Red House. Zane Sparling.

A local family says their home in Portland’s historically-Black Albina neighborhood remains “unceded territory” — despite authorities’ vow to remove barricades and enforce what they say is a lawful eviction.

Several members of the Kinney family hosted a press conference outside the “Red House” on North Mississippi Avenue just after 1 p.m. on Wednesday, Dec. 9.

Since Tuesday, hundreds of black-clad activists have used fencing, plywood and other materials to block access to the area near the home by erecting palisades across city streets. Portland Police Bureau officers and Multnomah County deputies arrived in the early morning Dec. 8 to “re-secure” the property from family members, who have continued to occupy the site since a first eviction notice was served in September.

Julie Metcalf Kinney, the matriarch of the family, told a crowd of supporters and press that her home was foreclosed upon after she took out a predatory loan in the early 2000s.

“This is a reverse redline,” she said. “The story of this house is that it is historic.”

The first speaker was COYA from the Community Alliance of Tenants:

“This is not a story about an autonomous zone. This is a story about systemic racism… this is gentrification happening before your eyes.” pic.twitter.com/4qRDwtLG7T

The elder son of the Kinney family, William X Nietzche, described the home as “unceded territory.”

Portland Mayor Ted Wheeler has said he will authorize all lawful means of clearing the camp, not including tear gas. Portland Police Chief Chuck Lovell released his own stern message for occupiers moments before the press conference was scheduled to begin.

“Those present at the barricades should leave it behind, put down their weapons and allow the neighborhood to return to peace and order,” Lovell said. “We share the communities’ concerns about the barricades.”

Michael Kinney, the younger son, was arrested Dec. 8 during the early-morning incident with police. When he returned, he alleged that officers had broken the sinks, toilet and the water heater. The area is now using tents, tarps and a generator to power the encampment.

“When I left the place was surrounded by cops,” Michael Kinney said. “(When I returned) the community surrounded the land and the land had been taken back.”

Coya, an organizer with the Community Alliance of Tenants, noted that the area was not an “autonomous zone” similar to those seen in Seattle and downtown Portland, but an eviction defense.

While the Kinneys have appealed to the U.S. Supreme Court, a federal judge for the District of Oregon has dismissed their case with prejudice. After foreclosure the property was sold at auction to Karina Andrews and Roman Ozeruga of Urban Housing Development, LLC. The company did not immediately respond to a request for comment.