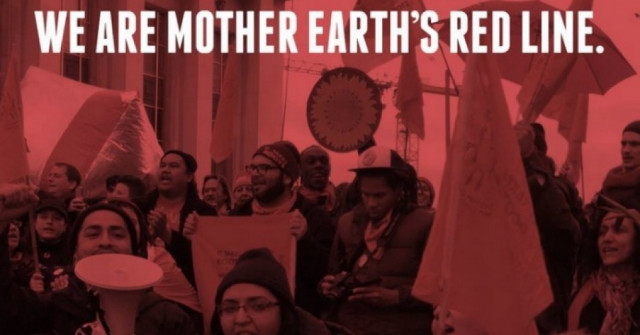 ‘Red Line’ For Mother Earth Drawn At US Capitol

‘We hold a red line to defend our environment, our homes, our families and our future generations’

Representing the communities on the frontlines of the climate crisis, activists are forming a “red line” in front of the U.S. Capitol building on Friday, vowing to stand firm “against the corporations and politicians driving the extractive economy” and their increasing assaults on people and planet.

“We draw a red line through the militarization of the federal budget, and the rising wars at home and abroad, and the ‘dig, burn, dump’ economy,” declares protest organizer It Takes Root in its call-to-action. “We hold a red line to defend our environment, our homes, our families and our future generations.”

The demonstration, which began at 2pm EDT, is being shared with the hashtags #ItTakesRoots and #EarthsRedLine.

Native prayer in the middle of 3rd Street on the National Mall. #EarthsRedLine #PeoplesClimate pic.twitter.com/A9gYLByAcW

Under President Donald Trump, the U.S. government has overseen a massive rollback of environmental and public health regulations. Studies have not only shown that Trump’s environmental policies will contribute significantly more greenhouse gas emissions to the atmosphere, but his cuts at the Environmental Protection Agency (EPA) will most disproportionately impact black and brown communities in a way that environmental advocates say is “just racist.”

The direct action is a collaboration between Climate Justice Alliance (CJA), the Grassroots Global Justice (GGJ) Alliance, the Indigenous Environmental Network (IEN), and Right to the City Alliance (RTC), and is part of the week of resistance leading up to Saturday’s Peoples Climate March, which includes a massive mobilization in Washington, D.C. as well as sister marches in cities coast-to-coast.

The powerful collaboration comes a day after Indigenous activists shut down traffic with a traditional round dance in the six-lane intersection outside of the Trump Hotel. On the walls of the Post Office Building, activists projected messages including “Resist Trump” and “Resist Pipelines.”

On Friday, Indigenous organizations held a press conference outside the White House outlining how the president is “failing Indigenous people,” and specifically decrying his recent effort to open native lands in Utah to fossil fuel development through an executive order signed earlier this week, as well as his backing of the Dakota Access Pipeline (DAPL).

“Our land is on the line, our water is on the line, our families are on the line,” said Dallas Goldtooth, Keep it In The Ground campaigner at IEN. “Our Indigenous relatives in Alaska are already experiencing the worst effects of climate change. We are leading the Peoples Climate March to send a clear message to Trump that fossil fuels belong in the ground, and Indigenous people and our lands are not his sacrifice zone.”

Joye Braun, who was one of the early organizers against DAPL, said: “It doesn’t matter what Trump tries to do, we are going to overturn it. When I was in North Dakota protecting our water, the police had water cannons on us for 8 hours in 27 degree temperatures. With everything they’ve thrown at us, we are still standing and we won’t stop now.”