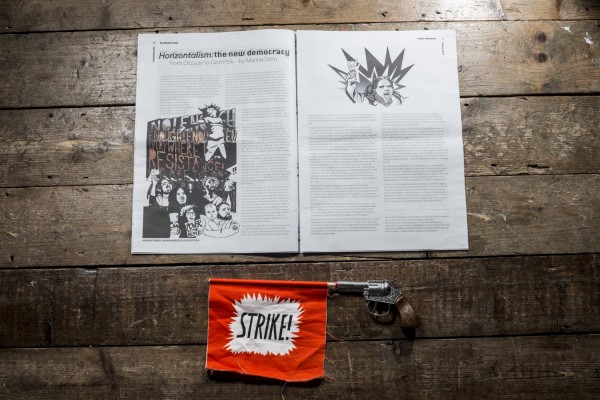 “Everywhere is Taksim! Everywhere is resistance!” and “Come, come whoever you are!” were some of the main slogans in the early days of the movement that began this spring in Turkey. What started as the defence of a park, quickly turned into hundreds of thousands mobilised in the streets throughout the country, transforming public space as it was held, and morphing in many places into horizontal assemblies and forums – or ‘agora’, as they are referred to in Turkey. And then in Brazil, only weeks later, hundreds of thousands began mobilising throughout the country, many chanting “No Party Represents Me!” From these mass-mobilisations, people also began to gather in city neighborhoods and towns, forming horizontal assemblies, discussing both what is wrong in society and what they can do.

These two places, Brazil and Turkey in the spring and summer of 2013, could easily be Greece and Spain, or the US and UK, Slovenia and Portugal, Moscow and Reykjavik and on and on. Each sparked at different times and from different specific causes, but with similar forms of organization, and under the same general rubric: no to representation and yes to horizontal social relationships. Each of the movements is using space in the same way to create these new relationships, first in the occupation and recuperation of large parks and plazas, and then to the neighborhoods and smaller towns. None are traditional social movements that have claims or demands, which, once met, will placate them. These are movements about reclaiming our relationships to one another, reclaiming space, and reinventing ways of being.

Since the end of 2010 millions of people have been taking to the streets in cities, towns and villages – assembling in plazas, occupying parks, buildings, homes and schools

. There is a growing global movement of refusal; simultaneously, in that refusal, there is a movement of creation. Millions are shouting No!, as they manifest alternatives in the wake of this no. People from below are rising up, but rather than going towards the top – ‘from the bottom up’ – they are moving as the Zapatistas suggested: ‘From below and to the left, where the heart resides.’

Hierarchy and representational democracy are being rejected, ideologically and by default, and in the rejection mass horizontal assemblies are opening new landscapes with the horizon of autonomy and freedom. What that means, what these societies in movement ‘want’ is not always clear, but they are walking, and as they walk they are creating new ways of being, new ways of creating in the crisis. The want is tied to the walk, it is intentional, it is a refusal of the crisis while opening new possibilities, still to be determined.

This ‘No!’, this ‘Enough is Enough!’, speaks for itself. It is an absolute rejection. It is not a shout of protest – it is a shout of refusal. It is a refusal to be a part of the crisis, and in the space of the no millions are simultaneous beginning to create Yeses. People are shouting against an economic, political, social and cultural crisis. But at the same time as the shout of No!, millions have been coming together to create their own alternatives to the crisis. This is, in some places and with some people, an ideological choice or position, a rejection of the state or forms of hierarchical power; for millions of others it is the result of a lack of alternatives.

The people are rejecting their states and institutions of power because these same institutions have made clear that it is the people who will pay for the crisis. This is seen most starkly in Greece and Italy, but increasingly so all over the world, from Ireland, Portugal and Spain to the US; at the same time, it is increasingly true that traditional forms of protest are futile. As Greek activist Anestis reflected when I interviewed him:

During the last two years different forms of struggle, mobilisation and organizing have been tested. If you asked people, even from the movement, two years ago ‘If we have a massive demonstration in the center of Athens with half a million people would we succeed to throw off the government and cancel the austerity measures?’ most people would have said yes. We did that, four times, five times, and they continued. I am not implying that we should stop having massive demonstrations in the center of Athens. I am just saying that we have experienced their limits, and now we must do something else. (Anestis. 2012, Athens, Greece, June.)i

Enough! is not so much shouted at the government as it is a point of unity, of people coming together; more of an exclamation that they have had enough – and, in that same space of enough, to begin to create horizontal assemblies in order to find ways to prefigure possible alternatives and futures. In the conversation with Anestis, he went on to explain the development of his neighborhood assembly of Peristeri, where people organize to meet their day-to-day needs as well as networking with other assemblies on broader questions of survival. It is not out of a desire to have an assembly each week that they meet, but that the state has failed and they now feel they only have one another. As Vasilis, in Athens, describes:

In the space of the No! is also the manifestation of multiple yeses and affirmations: from “we are the 99%” in the United States; Democracia Real Ya! (Real Democracy! As an exclamation and affirmation, not a demand) in Spain; and “vy nas dazhe ne predstavlyayete!” (“You can’t represent us – and you cannot even imagine us!”) in Moscow.

Horizontalidad is a social relationship that implies, as its name suggests, a flat plane upon which to communicate. Horizontalidad necessarily implies the use of direct democracy and the striving for consensus, processes in which attempts are made so that everyone is heard and new relationships are created.

More than merely a tool for assemblies, Horizontalidad is a new way of relating, based on affective politics and against all the implications of “isms”; while sometimes translated as horizontalism, it is a sort of play on the fact that it is against all that “isms” imply. It is a dynamic social relationship, and thus the meaning in English is more than just horizontal or horizontality – there is not yet a perfect word in English to describe this phenomenon. Horizontalism is not an ideology or political program that must be met so as to create a new society or new idea. It is a break with vertical ways of organizing and relating, and a break that is simultaneously an opening. Horizontalism is a process, a way of creating new forms of relating, and in that process the forms of relating necessarily change – so horizontalism is also an ever-changing process.

The intention behind the use of horizontalidad is not to determine the path that a country or group should take. It is to create the space for a conversation in which all can participate and in which all can determine together what the future should look like, while at the same time attempting to prefigure that future society in present social relationships. At its best, horizontalidad is a tool for real democracy.

“The force of the slogan, Democracía Real Ya!, as with other slogans, like “they say we have democracy and we don’t” – is to reflect that we do not live in a democracy, but in a dictatorship of the corporations. Now, in the movement, we have begun the process of discussing what democracy is. Democracía Real Ya! has opened a space for so many people who were frustrated with what we have – but what it means is still not clear, we are creating it.”