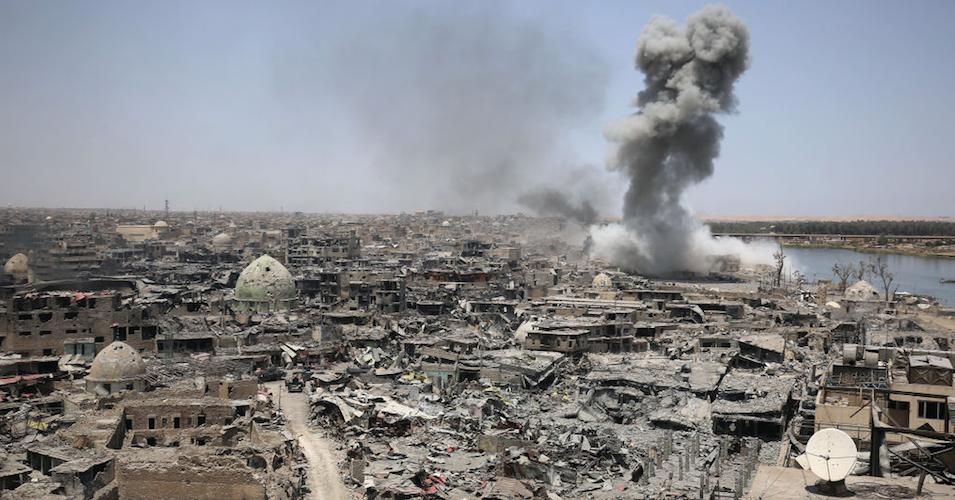 ‘Reducing Troops Not The Same As Ending Wars’

Above photo: A billowing smoke cloud rises over a neighborhood in Mosul, Iraq immediately after a U.S. airstrike on July 9, 2017.  Ahmad Al-Rubaye/AFP/Getty Images.

“Trump is trying to convince voters that is now following through on a campaign promise that he failed to keep in four years and will not fulfill with half measures,” says CodePink’s Medea Benjamin.

The U.S. military’s announcement Wednesday that thousands of troops will soon withdraw from Iraq was met with skepticism by peace activists, who were quick to note that a reduction in troop strength is not the same thing as ending the war.

U.S. Central Command (CETCOM) commander Gen. Frank McKenzie said Wednesday that the number of U.S. troops in Iraq will be reduced from 5,200 to 3,000 during the month of September, but critics said this should not be seen as President Donald Trump fulfilling his campaign promise in 2016 to end the nation’s wasteful overseas wars.

"Moving forward, we must continue our D-ISIS work together with our partners in #Iraq and #Syria.
We are continuing to expand on our partner capacity programs that enable Iraqi forces and allow us to reduce our footprint in Iraq.
– Gen Frank McKenzie #CENTCOMCDR @CJTFOIR

“This reduced footprint allows us to continue advising and assisting our Iraqi partners in rooting out the final remnants of ISIS in Iraq and ensuring its enduring defeat,” McKenzie said in a statement, referring to the militant group Islamic State.

McKenzie added that the drawdown decision is the result of U.S. “confidence in the Iraqi security forces’ increased ability to operate independently.”

The decision to withdraw U.S. forces from Iraq has long been expected. The Trump administration also plans to reduce the number of American troops in Afghanistan from 8,600 to 4,500, the lowest number since the earliest days of the 19-year war.

At the height of the Iraq War during the George W. Bush administration, there were over 160,000 U.S. troops in the country. U.S. troop strength in Afghanistan peaked (pdf) during President Barack Obama’s surge in 2011, when there were over 100,000 American personnel there. It was the Obama administration that first withdrew most U.S. troops from the Iraq War in 2011, but then resumed fighting there in 2014 as leaders of the anti-ISIS coalition.

Peace activists reacted to Wednesday’s news of the drawndown by the Trump administration with skepticism. In an email to Common Dreams, CodePink co-founder Medea Benjamin said that while her group “welcomes” the troop reduction as a move in the proper direction, the ultimate goal should be an end to the war that began in 2003.

“Any time U.S. troops are brought home from ill-conceived overseas adventures is a step in the right direction,” wrote Benjamin. “But the American people want an END to these endless wars, not a reduction.”

Benjamin noted that the Iraqi parliament “voted for a complete withdrawal of all U.S. troops from their country” earlier this year.

If Trump wants to fulfil his campaign promise, he must bring ALL troops home from Iraq, Afghanistan and Syria! The American people don’t want to reduce the wars, we want to END them!!!https://t.co/iAEnBw0n6a

Benjamin continued: “Trump’s announcement, and the timing of it, is a recognition in this election season that the American people are sick and tired of two decades of destructive, costly, and senseless wars in the Middle East. Trump is trying to convince voters that is now following through on a campaign promise that he failed to keep in four years and will not fulfill with half measures.”

“His promise was not to REDUCE the U.S. footprint but to get U.S. boots out. Period,” she added. “He should make good on that promise by bringing all the troops home.”

Vincent Emanuele, a former Marine and Iraq War veteran formerly with Iraq Veterans Against the War (IVAW), told Common Dreams that “the Iraqi people are still enduring decisions made in Washington, D.C. 16 years after the war [began].”

“While bringing the troops home is the right decision, Trump is at the same time escalating tensions in the region and by that making an end to the war more difficult to achieve,” he wrote.

Ending wars and withdrawing troops are two different things. While bringing the troops home is the right decision, Trump is at the same time escalating tensions in the region and by that making an end to the war more difficult to achieve.https://t.co/4ghpUgJ2Ff

On Tuesday, Trump—who is reeling from allegations that he called U.S. troops killed and wounded in the nation’s many wars “losers” and “suckers”—lashed out at his own military commanders, who he accused of “wanting to do nothing but fight wars so that all of those wonderful companies that the make bombs and make the planes and make everything else stay happy.”

While Trump is the first president since Jimmy Carter to not start a new U.S. war, he has fulfilled his campaign promise to “bomb the shit out of” ISIS and “take out their families”—a war crime. During his administration civilian casualties have soared in almost all of the at least seven countries under U.S. attack as he has loosened rules of engagement meant to protect civilians and stepped up bombing and drone strikes.

It is impossible to say precisely how many civilians have died during the course of the ongoing U.S.-led so-called “War on Terror.” The Brown University Costs of War Project estimates at least 800,000 people including 335,000 civilians have died during the war, while Physicians for Social Responsibility says (pdf) at least 1.3 million—and perhaps as many as 2 million—people have been directly or indirectly killed in just three countries: Iraq, Afghanistan, and Pakistan.

In the war against ISIS in Syria and Iraq, entire cities, towns, and villages—including the de facto ISIS capitals of Mosul and Raqqa—were reduced to ruins by ferocious coalition air and ground attacks that left thousands of civilians dead and many thousands more displaced.

On Tuesday, Common Dreams reported that the Costs of War Project estimated that as many as 59 million people in eight countries have been displaced by the war since 2001.

U.S. airstrikes in Iraq continued even as CENTCOM announced the drawdown.

At the request of Joint Operations Command Iraq, @CJTFOIR conducted an airstrike against an ISIS position in Kirkuk province, Iraq, Sept. 8. There is no safe place for terrorists to hide! @SecMedCell @modmiliq https://t.co/IbrKrpMWPv