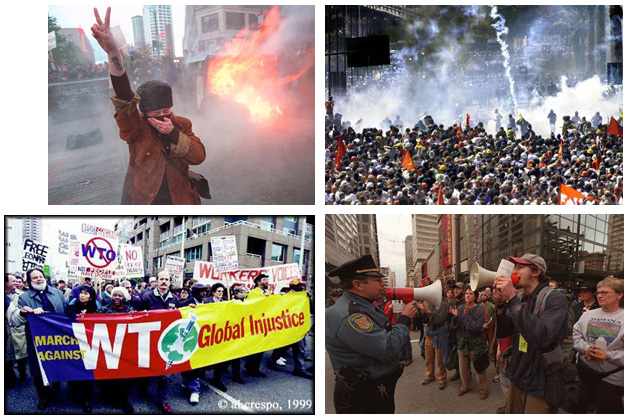 On another rainy November 30 morning in Seattle we gathered in the pre-dawn rain on the hill above the WTO Conference Center at Seattle Community College downtown and at the water at the foot of downtown, where I was. As numbers grew, people emerging in groups out of the dark Jeff from the International Longshore and Warehouse Union (ILWU) shouted a message of solidarity and announced that their workers had shut down all West Coast ports. The cops were confiscating 15-foot sets of 3 tripod poles awkwardly disguised at things like carrots. We started marching with our close comrades leading—rank and file folks from the Steelworkers Union, who were locked out of their Kaiser Aluminum plant in Spokane.
I’m thinking about 15 years ago in the rainy streets of Seattle, but even more about farmworkers in the fields of Immokalee and the roads of Burnaby Mountain, British Columbia where First Nations-led mass blockades against Kinder Morgan’s tar sands pipeline are currently happening.

As we arrived near the conventions center some groups were splitting off, others had already deployed to occupy and blockade their “pie slice” around the WTO. We saw that the authorities had surrounded part of the WTO with a barricade of buses, parked bumper to bumper. Most of our march just dispersed into the crowd that had already gathered the emergent intelligence that would win the day seeming to take a hold. I had been assigned to help with tactical decision for our march, but the only folks who had not dispersed into the blockades and crowds was the rank and file Steelworkers and the Infernal Noise Brigade—an elegant, militant, high energy marching band. Police in riot gear had set up line along the WTO side of one of the key intersections that people were blockading to keep WTO delegates (government officials and corporate reps and NGO’s). We marched into a multi-level shopping area and managed to come out directly behind the police line. Surrounded on both sides, the police line broke; this was the intersection where we formed a human blockade chain of hundreds of folks surrounding the entrances to the WTO. This fierce, fragile blockade line was anchored by organized affinity groups who had trained and prepared themselves, but joined by hundreds of folks who just showed up.

Other confrontations were taking place in the other twelve “pie slices” surrounding the WTO across the city. The groundwork of organization, education, training, alliances had been done so the action made sense to people–and the day to move from an organized resistance of those of us who were self-organizing the Direct Action Network into a public uprising of hundreds, then thousands of people who chose to join us—including rank and file unionists who ignore the AFL_CIO attempts to keep the union led march away from the direct action shutdown. Teargas, pepper spray, armored police vehicles, rubber bullets were unable to dislodge our occupation and blockades.

The announcement went out that the WTO had postponed it’s official opening—then cancelled it for the day. By the end of the week the talks would collapse and the 1 percents plan A to rule the worlds economy through the WTO was scuttled, as we in the US joined the global rebellion against neoliberal corporate capitalism.

Yesterday, I marched and picketed Foods Co with friend and allies from the Coalition of Immokalee Workers, in town for the screening the great new movie, Food Chains, that tells their story. I have supported and watched as they radically transformed to conditions for farm workers in Florida, and have modeled strategic, worker-led and organizing that inspired and influenced thousands and or workers, students and community organizers. That same week as the Seattle WTO in 1999, three thousand miles away in Immokalee, Florida, farmworkers carried out a five-day general strike against abusive growers paying starvation wages. Lucas Benitez told year ago that, “The Seattle protests showed us that there were large numbers of religious and union activists, youth and community people who were deeply committed to a vision of economic and social justice around the country. That news came at the same time that we were beginning to look beyond the confines of Immokalee, both in understanding the broader food industry and in finding new support – allies – for what would soon after become the Campaign for Fair Food.”

In a couple hours I will be painting banners with friends from Idle No More Bay Area for a climate justice solidarity action tomorrow, Eyes on Peru. Idle No More is an indigenous uprising begun in Canada for sovereignty and against Tar Sands that has been a catalyst for those of us taking on the fossil fuel industry and the system behind it in North America.

I see the movement of movements that are coming together around climate justice as the strongest space to continue what the global justice movement started in Seattle, which really wove together many movements. The North American global justice movement can be traced back to the indigenous rebellion against NAFTA, the prototype corporate rule (they call it “free trade”) agreement between elites in the US, Canada and Mexico. Exactly one year after the January 1, 1999 Zapatista rebellion on the same day NAFTA went into effect, the WTO was launched. “The WTO protests were the Chiapas insurrection come to [North] America. Like the Zapatista netwar, the conflict was one of civil society networks versus markets,” wrote Paul de Armand in Black Flag Over Seattle, his amazing analysis of the 1999 direct action street confrontations and network organizing in Seattle. I love Subcomandante Marcos’ (now “Subcomandante Galeano”) description of the struggle we are locked in for the future of our communities and planet:

“…two projects of globalization are in dispute. The one from above globalizes conformity, cynicism, stupidity, war, destruction, death and amnesia. And the one from below globalizes rebellion, hope, creativity, intelligence, imagination, life, memory and building a world where many worlds fit.”
Like corporate globalization, climate and related ecological crisis affects everyone, everywhere, so gives us an amazing opportunity to organize across the many things that keep us divided and ruled. The challenge is to define the climate crisis deeply in a way that understands that it is rooted in a economic and political system that are hardwired to be anti-democratic and exploit the earth and people for profit. This deeper understanding lays the groundwork to build a movements of movements that include movements around economic justice, racial justice, and environmental justice. We saw a taste of this at the Flood Wall St action and the People’s Climate March in NYC in September. Naomi Klein’s new book, This Changes Everything, helpfully explains that the framework of climate can “supercharge” and connect all of our struggles, rather than simple being another issue competing to resources and attention.After not writing about the Seattle WTO protests for many years, I realized that what people think and know about the past shapes what they do now and thus the future. It’s important to keep some continuity between movements and generations, so new movements and generations can take what is of use and understand what really happened and why from the past and continue to innovate. When Hollywood actor Stuart Townsend called me and told me he was going to make the film Battle in Seattle, I started writing analysis and reflections about Seattle to combat the false myth’s about the Seattle WTO mass direct action shutdown. At this time each year I think and write reflections and analysis around this time. Here are a few from past years:

2009: From Seattle to Detroit: 10 Lessons for Movement Building on the 10th Anniversary of the WTO. On the 10 year anniversary of the Seattle WTO shutdown, I nudged fellow Direct Action Network organizer Stephanie Guilloud to write her reflections. Here is what she wrote up:
http://www.indypendent.org/2009/11/30/from-seattle-to-detroit-10-lessons-for-movement-building-on-the-10th-anniversary-of-the-wto-shutdown/