Reflections On The Poor People’s Campaign; Returning After 50 Years

Above photo: Our National Improved Medicare For All group, by Melanie Oringer.

Our family went to the Washington, D.C. Mall to stand up for the Poor Peoples Campaign (PPC). We took a taxi and the crowded Metro. I wore the white coat that I had during the first PPC fifty years ago. I was deeply moved to meet others who returned to the PPC and the huge energy of thousands of new members of the Campaign. 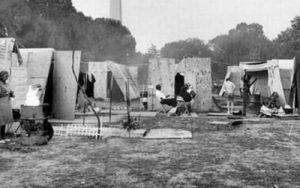 Fifty years have passed since I was a volunteer physician taking care of the PPC marchers who came across the country and the bridges into the District. They camped in the rain and mud to demonstrate the poverty deep in our “great” nation.

But, today while the PPC has had the same soaking rains, there was no mud. The thousands who came were met with a huge interlocking mat of white plastic. It was a thick, flexible barrier between us and the grassroots. The Park Service could take it up after the rally and march and there would be no mud and tracks of the PPC. 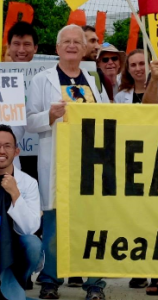 Our white coat group was a largely white privileged group that is fighting for another kind of protection for everyone. The PPC has included the movement for the human right to health care for everyone. The large contingent of white coated participants stood holding signs such as: Medicare For All, Health Over Profits and Single Payer Reform. We were welcomed by the poor people. The program included many stories of the tragedies of health care denied in our nation and the need for a National Improved Medicare For All as in HR 676.

Of course, it is sad that our nation has continued to mistreat the poor, the immigrants, the children and minorities such as the indigenous people of this land. It is worse. We have sunk to a deeper separation of the rich and poor. Our arrogant and ignorant political leaders insist on carrying on the failed neoliberal and extreme capitalist policies. They are separated from the poor people and the majority of us by corrupt campaign finance and biased election practices that they have grafted on to our so-called democracy. They continue to promote poverty, racism and abuse of the environment. They use clever advertising techniques to distract with fear mongering the attention of much of the public from the continuing disaster of trickle-down economics, mistreatment of women and children, perpetual war and military waste. Many of our poor attempt to escape the poverty and racism trap by military service from which they return in mental anguish. They continue failed government policies such as neoliberal imperialism, a corrupt drug war, and anti-social aggression in many other nations that give their people a grim choice of death or migration.

Our nation is distracted and failing. Issues such as child abuse, lack of health care, degradation of public education, racism and a moral and ethical deterioration are resulting in major changes such as increasing infant and maternal mortality, homelessness, suicide, addictions and unnecessary deaths. It is a sad form of terror that we have a class system of health care. Many physicians feel no shame at refusing to care for the poor. We are following a downward path in ethics and we need to turn around.

The Poor Peoples Campaign offers us a chance to act and make a major correction in democracy. We must quickly move the spirit to action of a great majority of our people. We must create the rules, laws and local conditions that will make the fair and just society that Martin Luther King Jr. glimpsed from a mountain top. Will we spring up the moral basis of the promise of our Nation? The call has gone out from the Mall and cities of America by the Poor Peoples Campaign to stop the moral decay, turn around and move up.