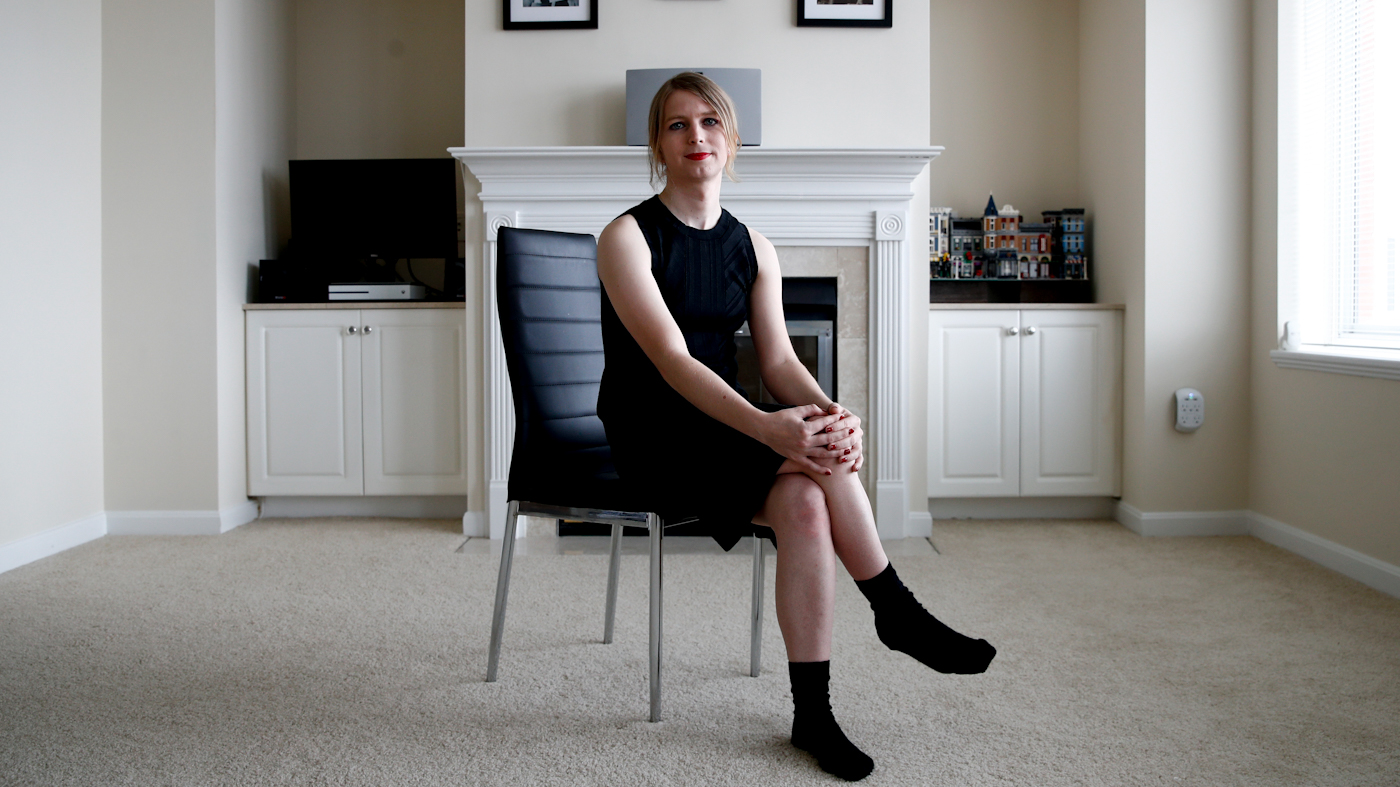 Above Photo: In this April 24, 2018 photo, Chelsea Manning poses for a photograph in her apartment in North Bethesda, Md. Manning, is one of America’s most famous convicted whistleblowers. Patrick Semansky | AP

Vigil at the Alexandria, VA jail Saturday, March 9 at 2pm.

The jail does NOT accept books or cards.

You CAN write letters with pen or colored pencils on paper, and send newspapers.

Show your support for Chelsea and her principled stand. Give her strength.

“I will not participate in a secret process that I morally object to, particularly one that has been historically used to entrap and persecute activists for protected political speech.” — Chelsea Manning

ALEXANDRIA, VIRGINIA — Chelsea Manning was thrown in jail on Friday for refusing to comply with a grand jury subpoena related to sealed charges against WikiLeaks editor Julian Assange. She is ordered to be held until she complies with the subpoena or the grand jury process concludes, which could be more than a year from now.

The whistleblower has already spent more than seven years behind bars for her activism — in that case, for blowing the whistle on U.S. war crimes in Iraq.

In a statement, Manning said the following of her remanding:

I will not comply with this, or any other grand jury. Imprisoning me for my refusal to answer questions only subjects me to additional punishment for my repeatedly-stated ethical objections to the grand-jury system.

The grand jury’s questions pertained to disclosures from nine years ago, and took place six years after an in-depth computer forensics case, in which I testified for almost a full day about these events. I stand by my previous public testimony.

I will not participate in a secret process that I morally object to, particularly one that has been historically used to entrap and persecute activists for protected political speech.”

“Accept whatever you bring upon me”

MintPress News spoke with Manning and members of her support team on Wednesday as she fought the subpoena in court, and has also examined how the timing of Manning becoming the target of a grand jury comports with the larger U.S. push to have Assange extradited from the Ecuadorian Embassy in London.

After a motion to quash her subpoena and other motions aimed at increasing transparency in the case failed, Manning and her legal team stood before a judge at the “rocket docket” in Alexandria, Virginia on Friday morning. Manning told the judge that she would not testify and “will accept whatever you bring upon me.”

Manning is no stranger to draconian justice: her previous placement in solitary confinement has been likened to torture — even by Manning herself when detailing the horrifying experience in an article.

An easy out, not taken

On Friday, Manning had a clear route to maintaining her freedom: she was reportedly offered immunity, meaning that she could not be punished for what she said during her testimony. But Manning was apparently unwilling to potentially incriminate others in the process either, and so she refused to testify.

Journalist Ford Fischer, founder of News2Share, got a chance to talk to Manning on Friday prior to her being remanded. He told MintPress News:

The thing to understand about Chelsea’s choice to go to jail — potentially for months — over testifying, is that this wasn’t about ‘covering her ass.’ She was granted immunity, which means she could have testified and gone about the rest of her life without much discomfort. This was about her standing up to the government on principle and refusing to ‘snitch’ on Assange even if she could have walked away free.”

Moreover, critics argue that because it is reported that the grand jury is seeking to question Manning on whether she worked with WikiLeaks before exfiltrating the government secrets, even though she previously testified that she had acted alone, the punitive nature of the subpoena itself is exposed.

Cooperating with the grand jury process is a violation of Chelsea’s political and ethical beliefs and we know that Chelsea is not going to change her mind. She is brave; she is going to stay strong and the government knows this, which shows us that this is purely a punitive move on their part.

In Jerry Kotch’s case in New York — that’s a good case to look at because they released him after eight months because he had similar political and ethical beliefs as Chelsea, so the judge ended up saying ‘this isn’t supposed to be punitive’ — that ‘since he’s never going to comply, we’re going to release him.’

Chelsea already served prison time for standing up against government secrecy and she’s not going to turn tail and allow the shadowy grand jury to eclipse that legacy.”

A call for support

Fassler urged supporters of Manning to continue to follow the Chelsea Resists social media accounts and to donate to the fundraiserapproved by Manning. Fassler said that Manning’s lawyers are “multiple” and “expensive.” In addition, Manning will need money to purchase commissary items in jail.

Commissaries are little stores inside prisons and jails that sell essential and sought-after goods at extorted rates, bilking families of huge sums over long periods of time for products that cost just a fraction on the outside. While prisoners are often under-fed during mealtime, they are able to supplement it with purchases at the canteen, where a can of soup can run as high as $15. Prices on products like deodorant are similarly jacked up.

We’ll probably be organizing call-in campaigns especially if her medical needs are not met, because she recently got surgery so that’s a really big issue for her. Any direct actions are always great as well.

The judge ordered that Manning be held in jail until she changes her mind or until the grand jury process is concluded, which could take a year and a half. After that point, Manning could face criminal charges.

Lawyers petitioned for the judge to allow Manning to serve out her confinement in her home because of medical concerns, but the judge said the U.S. Marshals would be capable of handling her medical needs. U.S. Marshals in the area have joked in front of detainees about how it is ‘ok’ to grab women’s genitalia because they “lose their rights” when in jail.

Upon exiting the courthouse, one of Manning’s lawyers, Moira Meltzer-Cohen, told reporters:

It was certainly a typical outcome for this kind of proceeding. As everybody knows, Chelsea has tremendous courage. Our primary concern at this point is her health while she is confined.”

Meltzer-Cohen added that it is likely that there will be an attempt to appeal the order to have Manning remanded.