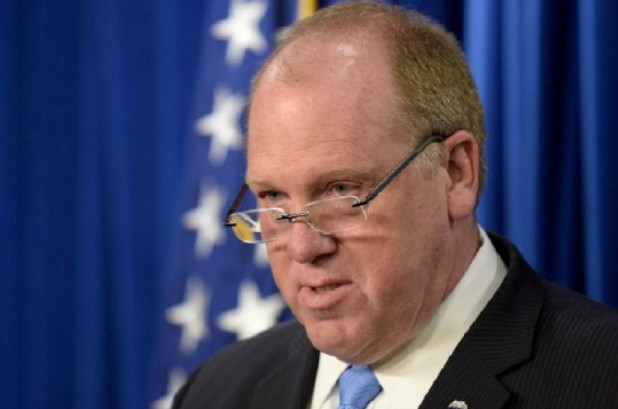 ‘Reign Of Terror’: ICE Chief Says Immigrants Should Be Looking Over Their Shoulders

He also said “no population of persons” in the U.S. illegally is safe from deportation

Immigration and Customs Enforcement (ICE) Director Thomas Homan declared on Tuesday that the federal government “shouldn’t wait” for undocumented immigrants to commit a crime before they are detained, comments that were characterized by one immigrant rights activist as part of the “reign of terror” President Donald Trump has unleashed in immigrant communities.

Homan added that undocumented residents in the U.S. “should be uncomfortable” and “looking over their shoulder[s],” concluding that “no population of persons” in the country illegally is safe from deportation.

“You should look over your shoulder,” he said, “and you need to be worried.”

Morally revolting. Also, this is another broken Trump campaign promise. What happened to just the “bad hombres?” https://t.co/5iM3GqM68B

The remarks came during a House Appropriations Committee hearing, in which Homan asked for more than a billion dollars to expand ICE’s capacity to detain and deport undocumented immigrants. Immigration arrests are “already up sharply since President Trump took office,” the Washington Post noted, and they “could rise dramatically next year” if Homan’s requests are fulfilled.

“Part of that increase,” added Buzzfeed’s Salvador Hernandez, “is due…to what many have seen as a shift in the agency to not just focus on immigrants with violent criminal histories, but minor crimes as well. Attorneys have also pointed to undocumented immigrants who have been detained without any criminal history, or minor convictions.”

Last week, Reuters reported that not only is the Trump administration rounding up undocumented immigrants at a staggering clip, it is also “reopen[ing] the cases of hundreds of illegal immigrants who…had been given a reprieve from deportation” by the Obama administration.

“Before, if someone did something after the case was closed out that showed that person was a threat, then it would be reopened,” said David Leopold, an attorney and immigrant rights activist. “Now they are opening cases just because they want to deport people.”

.@ICEgov Dir confirms that the deportation targets ARE moms, dads & grandmas “We shouldn’t wait for them to become a criminal” he said.

They’ve been rounding up Kurds in Tenn. some with convictions from over 10 years ago. Also harassing cmty & intrusive question.

And they’re rounding up Iraqi Chaldeans in Michigan. Terrible about the Kurds.