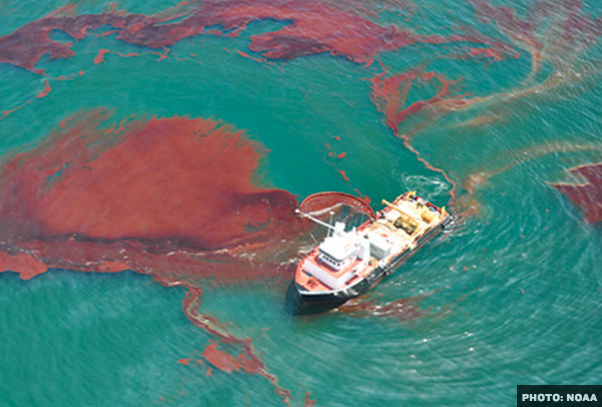 Photo by NOAA: Skimmers, like these used to clean up the Deepwater Horizon spill, were useless in Kalamazoo, where the tar sands crude sank to the bottom.

Five years ago, in the middle of the night, an oil pipeline operated by Enbridge ruptured outside of Marshall, Michigan. It took more than 17 hours before the Canadian company finally cut off the flow, but by then, more than a million gallons of tar sands crude had oozed into Talmadge Creek. The oil quickly flowed into the Kalamazoo River, forcing dozens of families to evacuate their homes. Oil spills of that magnitude are always disastrous, but the Kalamazoo event was historically damaging.

The first challenge was the composition of the oil. Fresh tar sands crude looks more like dirt than conventional crude—it’s far too thick to travel through a pipeline.

PHOTO: SUNCOR Try pumping this through a pipeline.

To get this crumbly mess to flow, producers thin it out with the liquid constituents of natural gas. Diluted bitumen, or dilbit, as it’s called in the tar sands industry, is approximately three parts tar sands crude, one part natural gas liquids.

When dilbit gushed into Talmadge Creek in 2010, the mixture broke apart. The volatile natural gas liquids vaporized and wafted into the surrounding neighborhoods. The airborne chemicals were so difficult to find and eliminate that Enbridge decided it would be better to simply buy some of the homes that were evacuated, preventing the residents from ever returning.

The tar sands oil, which stayed in the water, presented an even bigger chemistry problem. Most forms of oil, including conventional crude, are less dense than water. That’s why oil makes such pretty colors when dropped into a rain puddle—it floats andplays tricks with the sunlight. Traditional oil spill cleanup technology relies heavily on this density relationship. Skimmers and vacuums remove it from the surface. Floating booms prevent surface-level oil from moving into environmentally sensitive areas.

Put simply, the spilled dilbit traveled in every direction—into the air, with the current, to the bottom of the river—at the same time. The U.S. Environmental Protection Agency’s indisputably naïve response reveals how little anyone knew about tar sands crude. The EPA demanded that Enbridge remove the oil from wetlands surrounding the pipe by August 27, a little more than one month after the spill began. The agency wanted the stuff out of the creek, river, and shorelines by the September 27. Those deadlines would have been practical for a typical spill—but not for a tar sands oil spill. A half-decade later, some of the oil still remains—though, much of that has to do with Enbridge botching the cleanup effort (see onEarth’s three-part series, “The Whistleblower”).

Enbridge’s bungling began even before the spill. First, the company knew the pipeline was vulnerable by 2005, if not earlier. When the rupture finally came in July 2010, operators dismissed the alarms as a malfunction of the system for 17 hours before finally accepting that the pipeline had failed. Making things worse, six hours after Calhoun County residents were complaining to 911 about the smell of oil, Enbridge employees were still trying to fix the problem by pumping additional oil into the pipeline. In its review of the accident, the National Transportation Safety Board faulted Enbridge’s “culture of deviance” for what happened, pointing out that the response team in the first hours consisted of four local pipeline maintenance employees who were inadequately trained and made a series of bad decisions.

Not only did Enbridge fail to make the EPA’s initial cleanup deadline, it also blew through a series of fallback deadlines across more than four years. Not until late 2014 did the agency finally sign off on the remediation effort, handing the remaining responsibilities to the Michigan Department of Environmental Quality.

As the cleanup winds down, though, there is little cause for celebration. “The Kalamazoo River still isn’t clean,” says Swift. “The EPA reached a point where additional cleanup might do more harm than good. Much of the river is still contaminated.”

Some local residents accuse the company of overstating its progress. “In the process of beautifying everything and giving money to everybody and making everybody feel good about it, they’re not really telling people about the dangers still there in that water,” says Linda L. Cypret-Kilbourne of Michigan’s Potawatomi tribe.

Photo by EPA: Submerged oil recovery on the Kalamazoo River.

It’s not clear when the river will go back to pre-spill quality. After conventional oil spills, crews eventually back off and allow microbes to break down the last bits of crude. That approach isn’t a good option in Kalamazoo. First, the area doesn’t have a large natural population of oil-eating microbes like the Gulf of Mexico has. In addition, tar sands crude contains very high levels of heavy metals, which don’t break down easily.

Let’s not forget how much it cost to (not completely) clean the Kalamazoo. The current price tag is $1.21 billion (and rising), making it the most expensive onshore oil spill in U.S. history.

“ The Kalamazoo River still isn’t clean. The EPA reached a point where additional cleanup might do more harm than good. Much of the river is still contaminated. ”

It’s tempting to dismiss the slow, botched, expensive, and still-unfinished cleanup as growing pains. Tar sands imports have risen significantly since 2010, as has public awareness of the difference between the Canadian crude and the conventional product. In the five years since the incident, we should have improved tar sands oil spill response. But we didn’t.

If another Enbridge spill were to happen tomorrow, the company might respond more quickly, but huge volumes of heavy tar sands crude would still pour out of the pipeline. David Holtz of the Michigan chapter of the Sierra Club told reporters that a rupture in Enbridge Line 5, another pipeline that runs through Michigan, would be disastrous.

“If they hit the shutoff valve immediately after a rupture, there would still be more than 650,000 gallons of oil spilled into the Great Lakes,” he said.

Cleaning it up would be as challenging today as it was five years ago. There have been no technological breakthroughs since 2010. The tar sands industry should accept a large portion of the blame for this stasis.

“The efforts to improve spill response have been caught up in a public relations war,” says Swift. “The tar sands industry wants you to believe that oil is oil, and that its product involves no heightened concerns. As a result, spill responders are working with largely the same tools today as in 2010.”

Tar sands pipelines—like the one operated by Enbridge, or TransCanada’s proposed Keystone XL pipeline—run for thousands of miles, crisscrossing the United States and Canada in elaborate networks. They entail certain risks, and those risks are not going away. We have to decide how to respond. If we accept them, we must work to minimize the consequences by developing the appropriate safety measures and technology. Or we can reject them by eliminating tar sands from our energy infrastructure. The one thing we must not do is to pretend they don’t exist. The Kalamazoo spill is a reminder. Itwon’t be the last.