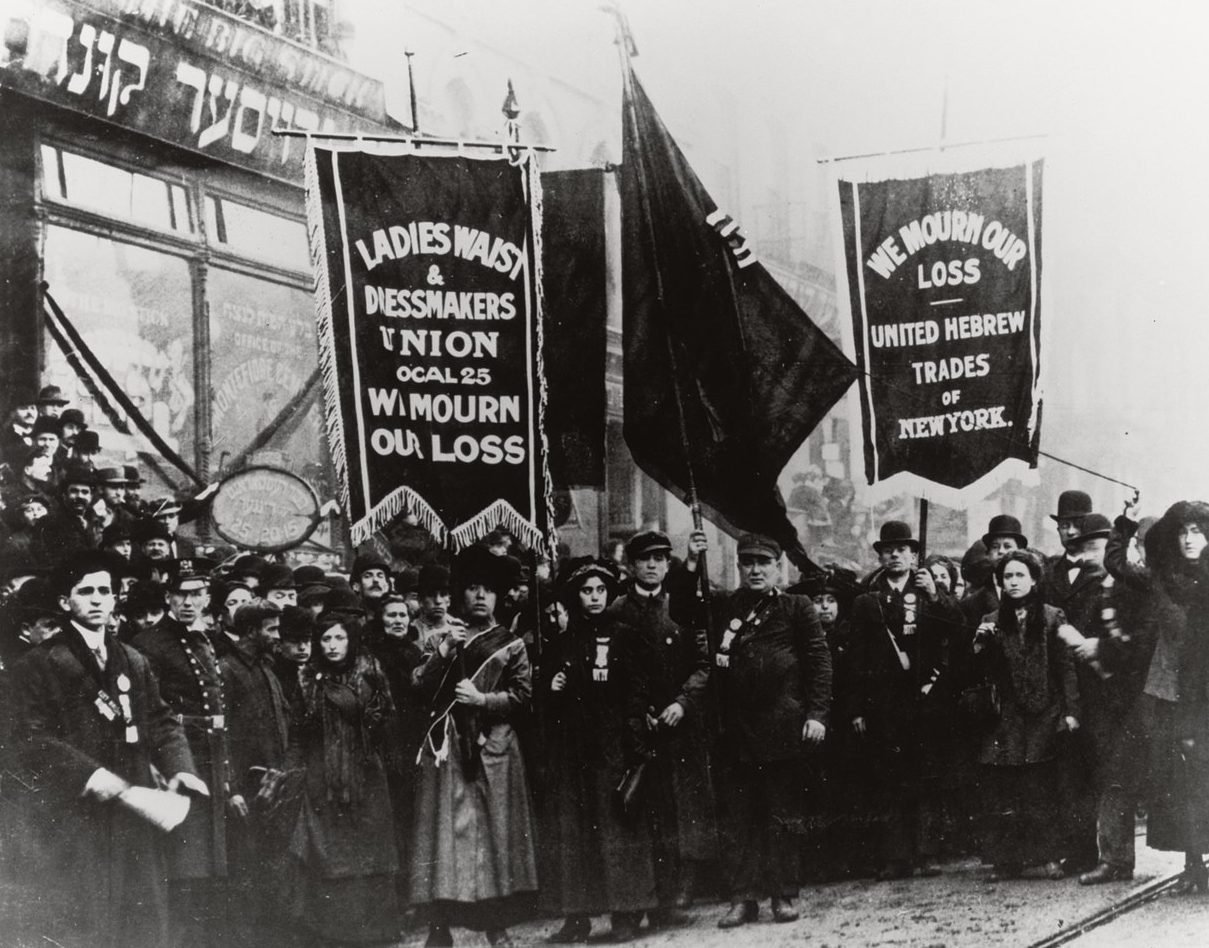 Above Photo: “Mourners from the Ladies Waist and Dressmakers Union Local 25 and the United Hebrew Trades of New York march in the streets after the Triangle fire” 1911. Reproduction. The National Archives, via Wikimedia Commons.

And The Women Who Fought For Labor Reform.

Around 4:30 p.m. on March 25, 1911, a fire broke out on the eighth floor of the Asch Building at Washington Place and Greene Streets, just as the young employees of the Triangle Shirtwaist Factory, who occupied the building’s top three floors, were preparing to leave for the day. The Triangle Shirtwaist Factory Fire killed 146 people, nearly all of them Jewish and Italian immigrant women and girls who toiled in the city’s garment industry. Triangle stood out as the deadliest workplace tragedy in New York City before 9/11. It served as a bellwether in the American labor movement, galvanizing Americans in all walks of life to join the fight for industrial reform. It also highlighted the extraordinary grit and bravery of the women workers and reformers – members of the International Ladies Garment Workers Union, and the Women’s Trade Union League – who fought and died for fairer and safer working conditions in New York and around the country.

The name Triangle was seared in the minds of workers and industrial reformers even before the building burned that terrible Saturday in 1911. The company was notoriously anti-union, and known to be exceptionally dangerous, even by the standards of the day. Owners Max Blanck and Isaac Harris, “The Shirtwaist Kings,” personally designed the layout of the 280 sewing machines on the ninth floor to minimize conversation and maximize production. They also fined their workers for talking, singing, and taking too many breaks.

Blanck and Harris preferred to hire immigrant women and girls, most of whom were in their teens, because the young women would work for less pay than men would, and the women were considered less likely to organize than their male counterparts. Whoever considered that, considered wrong. It’s satisfying to note that the youngest Triangle employee, Pauline Newman, who started at the factory at the age of 12, became a member of the Socialist Party when she was 15 and remained a lifelong industrial activist, one of the foremost “Ladies of Labor.”

She was not the only one. In 1909, the Triangle Shirtwaist Factory became the center of the “Uprising of 20,000.” That fall, Blanck and Harris announced that any workers who joined the International Ladies Garment Workers Union (ILGWU) would be fired. To prove the point, they dismissed 100 workers. In response, the women of Triangle went on strike. They were backed by the ILGWU, then the largest women’s union in the world. In a landmark meeting at Cooper Union on November 22, 1909, the ILGWU called a General Strike. Twenty thousand women across New York’s garment industry walked off their jobs in two days, picketing the unsafe conditions they labored under. It was the first major strike by women, for women, who held fast on the picket line as “sister strikers.”

Those unsafe conditions burned tragically clear on March 25, 1911, when stray ash from a foreman’s cigarette caught the piles of clippings and rags on the eighth floor of the Triangle Shirtwaist Factory. Fueled by grease for the sewing machines, a veritable ball of flame jumped from cutting table to cutting table, reaching as high as the ceiling.

The fire tore throughout the building’s top three floors, consuming the eighth, ninth, and tenth stories. But, the city’s fire ladders could only reach the sixth floor; its hoses only the seventh. As the fire raged out of reach, the building’s elevator cables melted from the heat, and the fire escape – on a building said to be “fireproof” – collapsed.

That day, Blanck and Harris were at work in their offices on the tenth floor. The workers who saw the fire break out on the eighth floor were able to call their bosses to warn them. Blanck and Harris promptly escaped via the roof. The women who toiled below them on the ninth floor were not so lucky, for they were trapped behind the doors that Blanck and Harris kept locked during the workday. Dead bodies piled up against those doors; even more splayed horrifically along the pavement on Washington Place and Greene Street.

Witnesses saw women and girls silhouetted against a sheet of flame as they scrambled to the window ledges. They jumped, often with their arms around each other, in a last clinging embrace of friendship, solidarity, and fear. Firemen below urged them not to leap, because the fire nets were broken, and the horse blankets were useless. But, as the flames caught their clothes and hair, the women faced a stark choice: die on impact or burn alive.

Their bodies were lined up in wooden coffins on the 26th street pier. As the victims were identified, their names, ages, and addresses were printed in the papers. East Broadway. Rivington Street. East 5th Street. Division Street. It seemed that everyone on the Lower East Side had lost a daughter, or a sister, or a wife, or a friend. So many neighborhood women and girls had to be laid to rest, that one Lower East Side funeral director performed eight services simultaneously. For the final seven victims who were so badly burned they could not be identified, 35,000 New Yorkers turned out in the rain to pay their respects at a public funeral.

After the Triangle fire, women workers were joined by wealthy reformers in a broad social coalition that was determined to right these and other workplace wrongs. The masses and the elite joined together for a meeting at the Metropolitan Opera led by labor activist Rose Schneiderman. That meeting led to the creation of the Committee on Safety, headed by Frances Perkins, who later became the first woman to hold a Presidential Cabinet position, serving as Secretary of Labor under FDR. Her Committee on Public Safety stood out as a powerful political force, with backing from a cross-section of the American public.

The Committee successfully lobbied such political heavyweights as Al Smith, Robert Wagner, and Henry Morganthau Sr. to embrace industrial reform. Those men pressed Governor John Dix to create the New York Factory Investigating Commission. The Commission, led by Smith and Wagner, operated for four years and led to the passage of over 30 workers’ safety statutes.

Perkins, who was an eyewitness to the Triangle Fire, served as an investigator on the Commission. Because Triangle was a lightning rod for industrial reform that shed light on American working conditions, Perkins called it “a torch lighting up the industrial scene.” In fact, the fire was such a major turning point in American labor history, Perkins, who was the principal architect of the New Deal, maintained that March 25, 1911, was “the day the New Deal began.”

The women and girls who died that day helped save generations of American workers from the same fate. We remember them with gratitude.