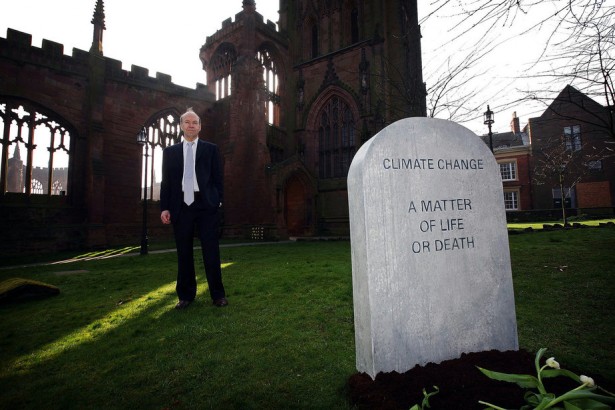 Removing CO2 From Air Only Hope For Fixing Climate Change

Above Photo: Scientist James Hansen, lead author of a new study urgently calling for removal of carbon dioxide from the atmosphere, poses next to a mock grave stone declaring “Climate change a matter of life or death” in 2009 in Coventry, England. Hansen, a prominent climate researcher, has dismissed criticisms that his recent papers blur the line between advocacy and research. Credit: Christopher Furlong/Getty Images

Without ‘negative emissions’ to help return atmospheric CO2 to 350 ppm, future generations could face costs that ‘may become too heavy to bear,’ paper says.

The only way to keep young people from inheriting a world reeling from catastrophic climate change is to reduce carbon dioxide emissions dramatically and immediately, according to a new paper. Not only that, but it’s also necessary to aggressively remove greenhouse gas that’s already accumulated.

“If rapid emission reductions are initiated soon, it is still possible that at least a large fraction of required CO2 extraction can be achieved via relatively natural agricultural and forestry practices with other benefits,” the authors wrote.

“On the other hand, if large fossil fuel emissions are allowed to continue, the scale and cost of industrial CO2 extraction, occurring in conjunction with a deteriorating climate with growing economic effects, may become unmanageable. Simply put, the burden placed on young people and future generations may become too heavy to bear.”

The study’s 12 authors, led by prominent climate scientist James Hansen, the former head of NASA’s Goddard Institute for Space Studies, call for bringing atmospheric carbon dioxide levels down to levels not recorded since the 1980s: 350 parts per million, a long standing goal of Hansen’s.

The level is now above 400 ppm, up more than 40 percent since before the Industrial Revolution. Many scientists reckon that 450 ppm is the safe limit to avoid the worst effects of global warming.

It was written to support litigation by Hansen and a group of young people (including Hansen’s granddaughter) seeking to force more ambitious climate action. And it is the latest in a string of scientific analyses showing that nations are far from reining in dangerous warming, despite the imminent entry into force of a comprehensive treaty negotiated last year in Paris.

The Paris deal aims to limit warming to 1.5 degrees or 2 degrees Celsius, in line with the 450 ppm level. That would require bringing emissions to “net zero” sometime in the second half of this century through a swift clean energy transformation. Any CO2 spewed into the air—be it from a coal plant, an SUV or an airplane—would have to be completely offset, or “zeroed,” by increasing the growth of forests and other carbon sinks.

But according to the paper, even a net-zero world wouldn’t be enough to prevent burdening future generations with an impossible task.

To attain Hansen’s bolder goal, countries have to achieve “negative emissions,” by removing more accumulated CO2 from the atmosphere.

The paper lays out five possible scenarios. In the worst-case scenario, emissions continue to rise by at least 2 percent a year after 2015, and CO2 levels more than double to 864 ppm by 2100. To prevent that dire outcome, which assumes countries aren’t reducing their emissions to net zero, 768 ppm of CO2 would have to be sucked out of the atmosphere by that time.

That would be enormously expensive for future generations—perhaps impossible.

In the most optimistic scenario, CO2 emissions stay flat until 2020, and then emissions drop by a steep 6 percent a year. This implies the world is rapidly transitioning to a clean energy economy and producing net-zero emissions before mid-century. But even this scenario requires pulling 72 ppm of CO2 out of the air by 2100—a more plausible, but still difficult burden.

Hansen, now an adjunct professor at Columbia University, has long warned that global warming inaction would lead to dire consequences. Nearly 40 years ago he developed one of the world’s first climate models, and was among the first scientists to conclude that the burning fossil fuels was to blame for modern climate change.

Eleven other scientists contributed to the paper from academic institutions across the globe, including the Chinese Academy of Sciences, the Australian National University and the University of Paris-Saclay in France.

It was published in a discussion journal, where research is published and sent for peer review at the same time.

Last year, Hansen and a team of 16 international scientists similarly publicized a paper in the journal Atmospheric Chemistry and Physics before it was peer reviewed. The move was criticized by some as blurring the line between advocacy and research. The study, timed to influence the Paris climate talks, warned that even 2 degrees of warming is “highly dangerous” and could cause sea level rise of “at least several meters” this century. The peer-reviewed version was published earlier this year.

“Some people might object to discussing such a paper before it has gone through the peer-review process. But again I’m going to do that, simply because we are running out of time on this climate issue,” Hansen told reporters this week.

As part of the paper, the scientists analyzed how today’s warming compares to the rest of the Holocene period, which covers the previous 11,700 years, and an even warmer period of history called the Eemain period, which occurred 130,000 to 115,000 years ago. During the warm Eemian, sea-level rise was between 20 and 30 feet higher than it is today. Today’s global temperatures are already at the level expected during the Eemian, or possibly above them, the paper says.

The authors recommend aiming for temperature and CO2 levels observed during the 1980s because they’re more in line with conditions during the early Holocene period, which did not experience catastrophic sea-level rise.

“A danger of the 1.5 degree C and 2 degree C temperature targets is that they are far above the Holocene temperature range,” the authors wrote. “If such temperature levels are allowed to long exist they will spur ‘slow’ amplifying feedbacks, which may have potential to run out of humanity’s control. The most threatening slow feedback likely is ice sheet melt and consequent sea level rise, but there are other risks in pushing the climate system far out of its Holocene range.”

To achieve negative emissions the study recommends using forestry and agricultural practices that increase the carbon-sucking ability of soil and trees, with the goal of pulling 100 gigatons of carbon out of the atmosphere. Even if that’s achieved, more expensive and intensive methods for emissions extraction would be needed, such as carbon capture and sequestration. One such approach would burn biomass as fuel while capturing the CO2 emissions and burying the pollutant deep in the ground.

“We assume that improved practices will aim at optimizing agricultural and forest carbon uptake via relatively natural approaches, compatible with delivering a range of ecosystem services from the land,” the authors wrote. “In contrast, proposed technological extraction and storage of CO2 does not have co-benefits and remains unproven at relevant scale.”

Hansen, his 17-year-old granddaughter Sophie Kivlehan and 20 other young people are suing the federal government to take more action on climate change. The Department of Justice and fossil fuel industry groups have opposed the lawsuit, but a judge ruled in April that it could proceed. Oral arguments were made in Oregon on Sept. 13, and U.S. District Court Judge Ann Aiken plans to rule within 60 days on whether the case will proceed.

“If the case goes to trial, we do expect that we can introduce this paper into the considerations,” Hansen told InsideClimate News via email.

The study’s chief conclusion on negative emissions “is hardly new or surprising or controversial,” said Michael Mann, a Penn State climate scientist who was not involved in the study. “That’s well known.”

But the fact that it’s being publicized prior to peer review and submitted in a legal case “will certainly raise eyebrows about whether or not this breaches the firewall many feel should exist wherein policy agenda should not influence the way that science is done,” he said.

Typically, scientific papers are subject to peer review when they’re submitted. If journal editors and outside commenters have any questions or concerns, the authors revise their work to address them before publication.

For this paper, scientists and others can now submit comments online and Hansen’s team must respond.