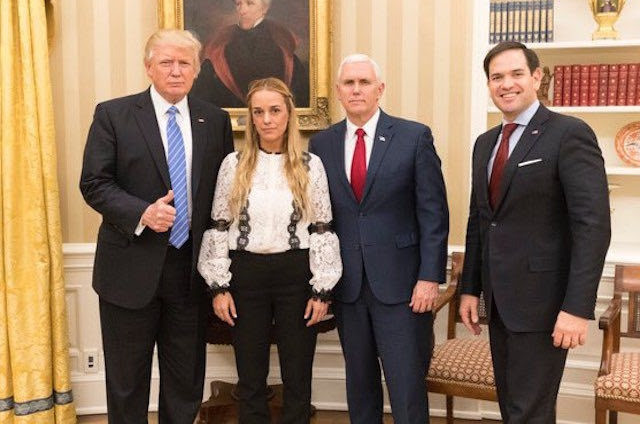 Above photo: Feb. 15, 2017. Sen. Marco Rubio (R-Fla.) brought Lilian Tintori, the wife of imprisoned Venezuelan opposition leader Leopoldo Lopez, with him to the White House. Afterward, President Trump tweeted a photo of himself with Tintori, Rubio, and Vice President Mike Pence (pictured right), and a message that the Venezuelan government should let Lopez out of prison immediately.

Fifteen years ago today, the people of Venezuela took to the streets to defend their Constitution -the only one ever ratified by popular vote – and to revert the coup against the democratically elected government of President Hugo Chavez. Venezuelan right-wing extremists, as well as transnational oil, business, and media interests, attempted to implement regime change in Venezuela, with the blessings of authorities in Washington. The coup was short-lived, but the interests behind regime change are still active and currently pushing forward a new attempt to dismantle Venezuela’s participatory democracy.

A brief background of the recent events:

In December 2015, an opposition coalition -composed of the same political movements tied to the 2002 coup – won the majority of seats in the National Assembly after a campaign that offered to solve Venezuela’s economic problems. Instead, on the very first day in office, the newly-elected Assembly’s agenda was to figure out ways in which to remove President Maduro from office within six months. Amending the Constitution, asking for President Maduro’s resignation, street protests, and attempting to carry out a recall referendum[1], were all considered but either poorly carried out or disregarded altogether. Differences between opposition leaders became evident, but regime change never ceased to be the main objective.

Just this January, the National Assembly went as far as to approve a motion to remove President Maduro from office on accounts that he had “abandoned” his duties as President. It was an attempt to carry out a legislative coup in the likeness of the ones against President Lugo in Paraguay (2012) and President Rousseff in Brazil (2016). However, the Venezuelan Constitution does not allow for a political trial of the President by the Legislature and the Supreme Court later overruled and nullified the action.  Although the failure of the opposition’s motion was predictable, the true objective was to draw international media attention back to Venezuela and make the case for early elections, in contradiction with the Constitution.

Datanálisis, an independent pollster, usually referenced by the opposition in Venezuela, stated in its most recent study (March 10-21) that President Maduro’s approval ratings have increased for the fourth consecutive time since November of last year.  Francisco Rodríguez, Chief Economist from Torino Capital, LLC, has indicated to his clients that “some of Maduro’s approval ratings could be due to perceptions that the economy is stabilizing…  Yet perhaps what is most remarkable about recent months is the significant decline in the approval of key opposition leaders”.  Rodríguez concludes his analysis by advising his clients that “the approval trends suggest that investors need to seriously evaluate all potential political scenarios ahead of the next elections, including one in which Chavismo wins the 2018 presidential elections”.[2] This assertion sheds light on the possible motivations for the current international pressure on Venezuela and the outbreak of focused street violence: the sole prospect of progressive forces regaining strength threatens to dwindle the advantage the opposition displayed in late 2015.  Regime change had become even more urgent for its proponents.

The arrival of a new government in Washington, opened the way for taking a harder line on Venezuelan policy. On January 26, members of the opposition that had been present at the dialogue roundtables decided to abandon the process and follow the lead of Voluntad Popular, an opposition political party that spearheaded the violent protests in 2014, resulting in 43 dead and hundreds wounded. On February 8, 34 members of Congress, including some that are known for their traditional anti-Venezuela stance, asked President Trump in a letter to “take immediate action” against Venezuela. On February 13, Vice President Tarek El Aissami, was accused by the Treasury Department of drug-trafficking and soon after, on February 15, President Trump met with key opposition figure, Lilian Tintori, from Voluntad Popular. In a Senate Foreign Relations Committee hearing on March 2, Senators Marco Rubio and Ben Cardin, among others, pointed out how the Organization of American States (OAS) should act against Venezuela’s government. Senator Rubio expressed that Congress should “use all of the energy that we have and all of the influence that we have to serve as a catalyst for action at the Organization of American States, to evoke the Democratic Charter” on Venezuela.

From that point forward, the OAS Secretary General, Luis Almagro, proceeded to present an outlandish report on Venezuela, filled with manipulated facts and half-truths. Since, he has begun to label Venezuela “dictatorship” and has called for immediate general elections or otherwise face a possible suspension, such as the one suffered by Cuba in 1962. Meanwhile, OAS member States have suffered all sorts of different pressures in order to also adopt a hard line against Venezuela. The most public of these pressures came from Senator Rubio himself, publicly threatening to cut funding for Haiti, El Salvador and the Dominican Republic if they did not act against President Maduro’s government: “We have a very difficult situation in Washington, where massive cuts in foreign aid are under consideration and it will be very difficult for us to justify assistance to those countries if they, at the end of the day, are countries that do not cooperate in the defense of democracy in the region”.

On April 3, an extraordinary session of the Permanent Council met illegally after the Chair (Bolivia) and the Vice Chair (Haiti) were literally deposed by a group of hostile countries supported by Almagro, with the objective of adopting a resolution stating that Venezuela’s constitutional order had been breached and elections should take place immediately. Not only were procedures violated so that Honduras would chair the session, but the meeting itself violated Art. 1 of the OAS Charter by conducting a session on Venezuela without the country’s consent. To aggravate matters, the illegal session, adopted a resolution by “consensus” despite the fact that 4 delegations voiced their abstentions, leaving only 17 to approve it, when rules clearly state that all acts must be approved by a majority of 18. Behind all of this confusion, was the need to produce a resolution from a regional body that would undermine the legitimacy of the Venezuelan government and therefore trigger a series of violent actions in Venezuela, reminiscent of prior attempts at regime change such as the violence of 2014 and the 2002 coup against President Chavez.

The right to peaceful protest is guaranteed by the Venezuelan Constitution. However, since April 4, repeated acts of violence have been registered against public institutions, law enforcement officers and common citizen bystanders. Authorities have proceeded to contain violence and maintain public order, while carefully guaranteeing due process and the protection of human rights. Notwithstanding, the dominant narrative put forth by national and international mainstream media, with the support of the OAS Secretary General, the right-wing governments in the region that supported the resolution (such as Argentina, Peru, Paraguay, Mexico, Colombia and the de facto regime in Brazil), the White House, State Department, and Congress officials, is aimed at damaging Venezuela’s image to make regime change seem unavoidable.   Even more disturbing in the fact that the U.S. Southern Command has gone as far as to state that a “regional response” might be necessary under the current situation.

During the past few days, anti-democratic violence has expressed itself in various ways[3]. Out of 23 states, protests so far have only taken place in a few municipalities within 6 states, and mainly in middle-class sectors of Caracas. Far from peaceful, the so-called demonstrators have been responsible for actions such as destruction of public property, obstruction of public spaces and roads, knocking over lampposts, arson, theft, and all forms of mob violence. Numerous provocations and attacks have been perpetrated against law enforcement officers, particularly female officers, with the use of Molotov cocktails, rocks, and blunt objects.

It is obvious that regime change is in the agenda for the internal and external opposition to President Maduro. However, the Venezuelan people have a vibrant participatory democracy and will not allow these renewed attempts at regime change to prosper.

The Venezuelan government will exercise all of its authority to maintain peace and order, always guaranteeing due process and the full protection of human rights. Venezuela will also resist interventionist practices against its sovereignty, freedom, and self-determination, and will continue to denounce acts of aggression against its peace, such as the one being promoted from the OAS.

[1] The process to activate the recall referendum against President Maduro included fraudulent signatures collected by the opposition, which eventually derailed the process.

[3] You can see footage of the violence here